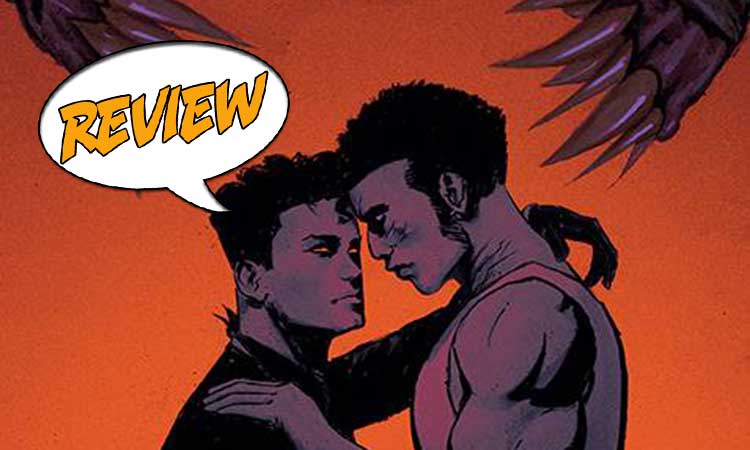 Aaron learns that the effects of love can live on for years. But why must he now kill Jace, the man he loves? Find out in House of Slaughter #4 from BOOM! Studios.

Previously in House of Slaughter: A look into Aaron’s past reveals some of the hidden histories of the House of Slaughter itself. Jessica has only Erica and Aaron as Black Masks, and she worries that they, especially Aaron, are not yet ready to hunt. Cecilia’s kids, the pack hunters, resent Aaron because they feel he is babied and Jace because, as a Legacy Hunter, they feel he has not earned his place. Jace takes Aaron on a rooftop excursion, breaking the rules of the House of Slaughter. Why has Jace come to this House when he could have been free?

In House of Slaughter #4, Aaron’s and Jace’s romance comes to be an important thread through past and present. Fifteen years ago, Aaron admitted his love. In the present, he finds that Jace has changed, and Jace observes that Aaron, on the other hand, has not. As the story, and even the dialogue, winds back and forth, we begin to learn more about the conflict.

In the past, on the day of the ritual hunt, Jessica finds out about the romance which has barely begun, and demands that he end it. At first, all we see is her anger, but it is followed by sadness. Monster hunters must suppress their emotions; affection for others can be a weakness. She asserts that is why there are so few Legacy Hunters, but also admits her fear for his future survival.

Aaron, on the other hand, admits that he has finally found something akin to happiness, maybe even the real thing. We’ve seen his despair all along, maybe even depression. His parents died, but they weren’t killed by a monster, so he has grown up being alone and being an outsider. Jessica did not want to bring him up as a psychopath; she wants him and Erica to hang onto their humanity. But is that humanity ultimately a weakness?

In the present, Aaron challenges Jace, but Jace will not take up his daggers. Jace insists that Aaron will have to kill him before he would hurt him. Aaron’s anger is real – he is angry because Jace left him fifteen years ago, and Jessica is dead, and he has been alone again.

Back in the past, Jace asks Aaron to meet him on the rooftop with his bags packed. He has a story to tell, the story of his family. It started when a small Black boy from Haiti, stolen from his family by a Frenchman, arrives in New Orleans. He was a natural monster slayer. La Maison de Boucher took him in. Later in life, he met their Northern rivals from the House of Slaughter. But Jean started a family of his own, a family of monster hunters who were part of La Boucherie, but who had their own ideas. The monster hunters of La Boucherie were not killed by internal strife; they were killed by their Northern rivals.

Jace was not found by happenstance; he has had long-term plans to kill the man responsible for his family’s death and to destroy the House of Slaughter. But he doesn’t want to kill Aaron, so he gives him a chance to be free.

A LEGACY OF LIFE AND DEATH

House of Slaughter #24 is as much an exploration of memory as it is a story of love and rivalries. It uses the art to keep the time periods separate from each other and uses similarities in positions and situations to draw parallels and connections between them. We see this right from the start as Jace and Aaron’s early time together parallels their last night before Aaron announces he has to kill Jace. Jessica’s forbidding of their relationship gives their story all the weight of a romance doomed to tragedy.

Aaron may not realize it, but their affection also had an impact on Jace. We see him on the ritual hunt, his concentration broken at times by memories of moments with Aaron. He wanted Helen to be the bait to draw out the large monster, but his own movements brought him close enough to be wounded. I think it can be read as symbolism for being wounded by love, by deep emotions. It is not until the end that we see how Jace is also affected by the desire for revenge, for the loss of the family he also loved.

BOTTOM LINE: DECISIONS ARE THE INTERSECTIONS IN LIFE

The deeply secret political rivalry between the House of Slaughter and La Boucherie turns House of Slaughter #4 into a grand romantic tragedy. Love may be wonderful, but in a dangerous world, it can make you even more vulnerable.

Jace shares his past with Aaron in the hopes of sparing his life.