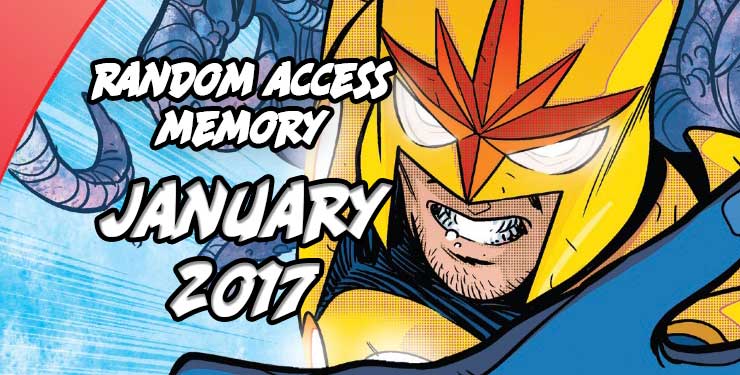 Rand Bellavia takes a look at his growing longbox, and reflects on comics released in January 2017.

The Flintstones 7: Another Day on Earth This issue deals with religion and ethics.  We open at the Church of Gerald: After realizing that it’s a lot easier to sell the notion of a just God by convincing everyone that bad people will be punished (and good people rewarded) in the afterlife, Reverend Tom discovers a new problem:

Just then, a parishioner shows up concerned about the state of her soul. Meanwhile, The Great Gazoo is filling out a report on the people of earth.  (Warning: Social Satire Dead Ahead!) Before long, it’s time for the prehistoric Martin Luther to nail his 95 theses to a cave wall. Amidst all this moral compromise, Fred takes a stand. Gazoo’s report is interspersed between all of these scenes, providing interesting commentary on what he thinks the problem with humanity might be. This is reminiscent of Grant Morrison’s image (from The Invisibles) of humanity as a caterpillar so hungry for metamorphoses that it will devour the very leaves that are keeping it in the tree. This was my first exposure to Donny Cates and Geoff Shaw, and what a great introduction it was!  You’ve got solid world building, emotional family dynamics, engaging theological discussions, and a preposterously large talking sword. We begin grounded in reality, meeting our main characters in the midst of a real world crisis moment: Emmett’s dementia is such that he no longer recognizes his own son, and — practically speaking — he has never met his granddaughter.

Then the normal lives of our characters are changed by the aforementioned giant talking sword: Someone’s about to meet their granddaughter. Before Jeff Loveness became a powerhouse writer for Rick and Morty, he wrote a lot of really great, funny comics that very few people appear to have read.   This Nova series began with Sam Alexander (the “current” Nova) meeting Richard Rider (the “original” Nova).  This issue picks up with Richard meeting Alex’s friends. After Amadeus Cho (AKA the Totally Awesome Hulk) convinces Sam Nova that Richard Nova is the Real Deal, Kamala Khan (AKA Ms. Marvel, no not that one) and Miles Morales (AKA Spider-Man, the other one) arrive, and we get my three favorite Marvel panels of 2017: After a few pages of this, Richard Rider begins to wonder if coming back to life was a good idea after all. Other Comics I Read from January 2017