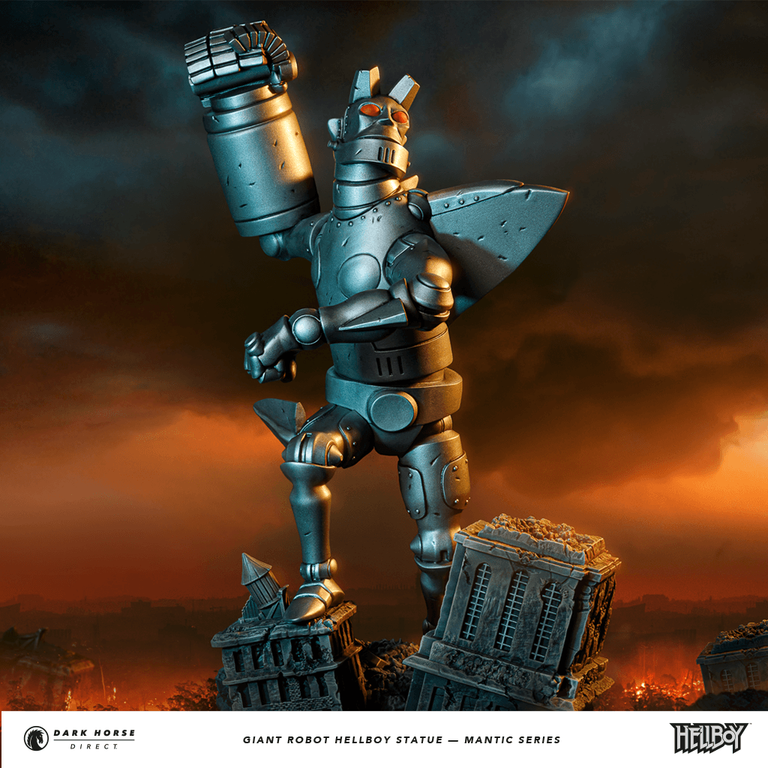 Dark Horse Direct has revealed a new Hellboy statue that is available for pre-order, that features the union of Hellboy and robots.

Based on the art of Mike Mignola, the Giant Robot Hellboy statue stands 12-inches tall on a base that is 9-inches wide.

This exclusive statue was meticulously sculpted by the creative team at Mantic Games and painted as if to look like the day it was built.

“In June of 2020, when Mantic was getting ready to announce their playable miniature of Giant Robot Hellboy, they asked me about the character’s origins,” said Mignola in a press release from Dark Horse Direct. “I hadn’t really considered his back story when I first designed the character, but it got me thinking. What if Giant Robot Hellboy had been built by a secret group of Japanese scientists and abandoned in the 1950’s? What if he was discovered in a cave in Japan in 1972, then turned over to the American government? And what if a retired carnival hypnotist was able to transfer Hellboy’s mind into this Robot when there was an emergency situation that called for it? Stories have a way of evolving over time and if I were to ever create a comic about Giant Robot Hellboy — and I just might — the story may turn into something else entirely. But there was a germ of an idea there and the character’s certainly a lot of fun to draw.”

The Giant Robot Hellboy statue is sculpted by Mantic – the company behind the very cool Hellboy table top game. There are only 500 units available, with a pre-order price of $179.99. The statue is expected to ship next fall.