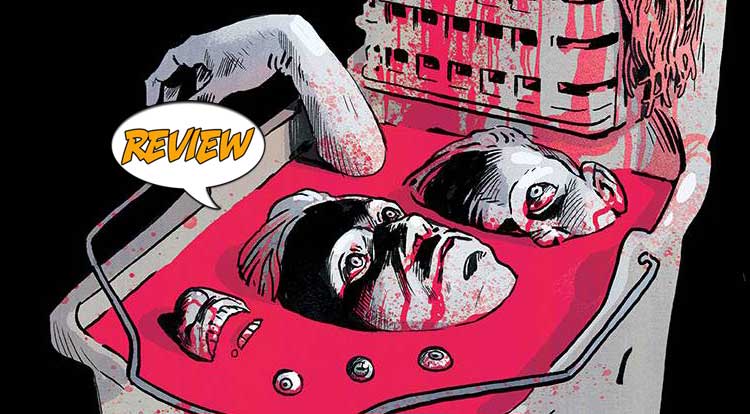 The great philosopher Ted DiBiase said it best, “Everybody has a price.” What’s yours? Your Major Spoilers review of The Silver Coin #8 from Image Comics awaits!

Previously in The Silver Coin: When an executive at a 1960s stock brokerage acquires a collection of antiquities, the gap between the haves and the have-nots becomes painfully clear. The price of The Silver Coin keeps going up… even as the fortune of its owner plummets.

The Silver Coin #8 begins in New York, in the winter of 1968, at an unnamed Wall Street firm. Rich and probably evil Mr. Pynchon welcomes a strange vendor into his office, a man with a unique coin collection for sale. Their transaction is interrupted by custodian Henry, who is fascinated by the titular Silver Coin. Over the next few days, Henry repeatedly comes to clean the case, which seemingly leads to him being relocated off that floor. (The story isn’t actually very clear on this point, but I’m inferring quite a bit.) It’s also implied that he smashed his way into the cigarette machine in the lobby with a fire axe and stole all the Camels he could carry, but his worst crime is still to come. First, he tries to steal the coin, only to get caught by a security guard who doesn’t realize what he’s up to. Then, Henry murders the custodian who took over the 24th floor in the hopes of getting close to his target again. When Pynchon muses out loud that he’d give someone “whatever they wanted” to kill another businessman, Henry’s fate is sealed…

REMINDS ME OF SEVERAL THINGS

There is a LOT left up to interpretation in this story, such as Henry’s murdered wife, who is suddenly seen in one panel, or the other businessmen trying to dive out of the building when Henry leaps out a 24th story window after the falling Silver Coin. It reminds me very much of a not-that-long-ago issue of Image’s other existential horror title, Ice Cream Man, which likewise ended with a man falling to his doom. The story also feels very reminiscent of an episode of The Twilight Zone from 1959, without the necessary moral at the end. The art is okay in this issue, but there are several places where I can’t really follow what’s going on, and at least two points where the visuals feel completely disconnected from the story.  The parts that work are a bit reminiscent of Charlie Adlard’s work on The Walking Dead, which I enjoy, but there are some bizarre character design choices as well.  Moreoever, when it comes to a horror anthology, motivation is important, and this issue doesn’t really have a clear throughline or moral, other than that The Silver Coin is evil.

BOTTOM LINE: NOT THE MOST ORIGINAL

The good thing about The Silver Coin #8 comes in the use of classic horror story tropes in comic format, but there are enough peccadilloes in the art and narrative to make it a little more work than it needed to be, breaking down to a right-down-the-middle 2.5 out of 5 stars overall. Sometimes, less is more, but this issue needed a stronger focal point to pull it all together. However, if next issue picks up from where this leaves off (with a homeless man finding the lost talismanic coin), it might make this one more successful than it is as a done-in-one.

It's gory, it's dark, but it feels unfocused and unmotivated. What's more, the story influences are very obvious, making for a so-so-read.