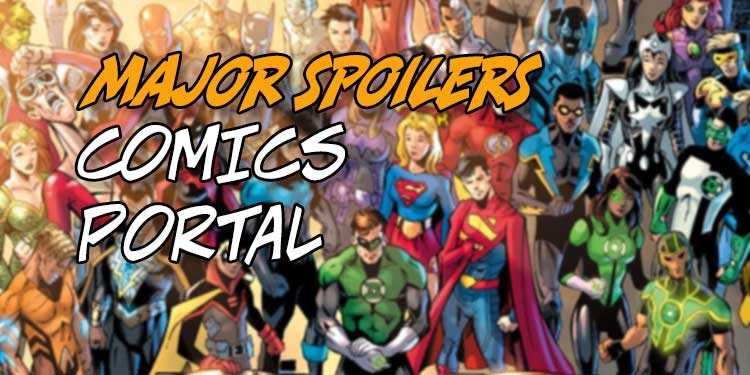 As reported here at MajorSpoilers.com, DC is killing the Justice League… nearly all of them! DC announced, both in their April 2022 solicitations and in an interview with Entertainment Weekly, that they are, yes, killing the Justice League… all except for one, who will return to Earth to tell everyone else the rest are indeed dead. This all happens in the last issue of the current run of Justice League.

Here’s how it is described:

“A new Dark Army made up of the DCU’s greatest villains has formed on the edges of the Multiverse! The DCU’s best and most powerful heroes are pulled together in an epic war to push the darkness back! But in the end, they are no match for it! That’s right, you heard it here first: the Justice League are killed by the Dark Army, with only one survivor to warn the remaining heroes of Earth about what is coming for them! FINAL ISSUE!”

Apparently, this includes killing Batman, who is DC’s “golden goose” these days, having more titles each month than most of the company’s other heroes’ books combined.

The word circulating the comics press online is that the team will be replaced by a new “Young Justice” of sorts, including “newer” versions of the heroes like Jonathan Kent, Yara Flor—the newest Wonder Girl, one of the Robins, Jackson Hyde, and Kid Flash, just to name a few.

This will, naturally, wreak havoc with DC’s other media, including The CW’s superhero shows, their movies, and any other multimedia products. For instance, if you watch the upcoming movie The Batman in which the hero is Bruce Wayne, you might be confused if you pick up a comic book without the “same” character in it. I’ve long said that if your answer to sagging sales is to kill a character, you should surrender the title to someone else who just might be able to come up with better stories.

I am a BIG fan of Joshua Williamson, who is scripting this issue. However, I think this is just the latest attempt by DC’s leadership to “revamp” their line-up in an attempt to appeal to younger readers. (Anyone else remember “Future State” from just a few months back?) Mr. Williamson created a long series of issues for Barry Allen as The Flash that was superb, to coin a phrase, so he’s proven he can tell great stories with an established hero.

There is an interview I read online with Mr. Williamson in which he fondly remembers standing in line in the rain while waiting to buy the Death of Superman comic at his local shop. Yes, it sold well largely due to the fact that Clark didn’t immediately leap out of the grave. However, doing this again, and to a larger scale, just feels like a gimmick to me. There, I said it!

Yes, the book will sell well. I would happily lay down money, though, that: 1. We’ll get a “new” Justice League comic with those “Young Justice” characters in it sooner rather than later, and 2. The original characters will be back as soon as the sales again start to falter—“Because you demanded it!”

At least, I hope so. DC would be insane to mess up Batman when he’s literally “flying high” as the main character in most of the company’s offerings these days.

THIS IS A BIG MISTAKE! Look, in my opinion, this is truly a huge mistake on DC’s part. Didn’t Marvel try to do something similar by replacing most of their lead heroes with younger, “hipper” versions of them just a couple of years back? (Is the female Thor even around these days?) That sure didn’t stick, and it certainly won’t work for DC, either.

As I pointed out, DC tried this not long ago with “Future State.” They even had TWO Batmen running around Gotham, although the newest one is now in New York City—how “marvelous” of them!

From what I hear, the “new” Superman’s sales haven’t been all that successful, which ought to tell DC something! If having TWO Supermen hasn’t worked out all that well, will getting rid of the established, more popular version be a good idea? I think not!

Death in comics is only temporary, as I often like to point out. Sooner or later, the characters will be back—you can count on it! This is only a temporary fix to a long-term problem in falling sales.

This all circles back to what sells a comic. Is it younger, less experienced heroes? Or could it be good stories that challenge the characters in new and different ways? I vote for the latter, which is obviously a more difficult task for creators yet more satisfying to fans plunking down their hard-earned cash for comics!

Again, I go back to Batman. This hero has been around for decades, yet he’s currently the most popular he’s ever been! When DC replaced the guy “under the hood” with a younger version, that didn’t work out. He’s back as Nightwing, whose title is actually doing better because he’s got a new creative team doing good things with the character. Honestly, DC should learn from this experience!

Instead of retooling heroes with other, newer characters, how about telling good stories with the ones that everyone is familiar with? Perhaps there are a certain number of fans who buy comics based on how close to their age the title character is, but I don’t think that’s enough for DC, Marvel, or any other company to make more money from. I never cared about how old a comics hero is—what I cared about was how well he or she was challenged in the stories being told about them. Really!

I always want to start a “pool” to see who will correctly guess just when the “permanently” dead Justice League will return to comics. Let’s face it—it WILL happen, it’s only a question of WHEN!

What do you think? Do you want to see a new, younger version of the Justice League? Does the age of the hero in the comics you buy matter to you? Or is it the storytelling that is more important to you? Whatever your opinions, be sure to share your thoughts below!