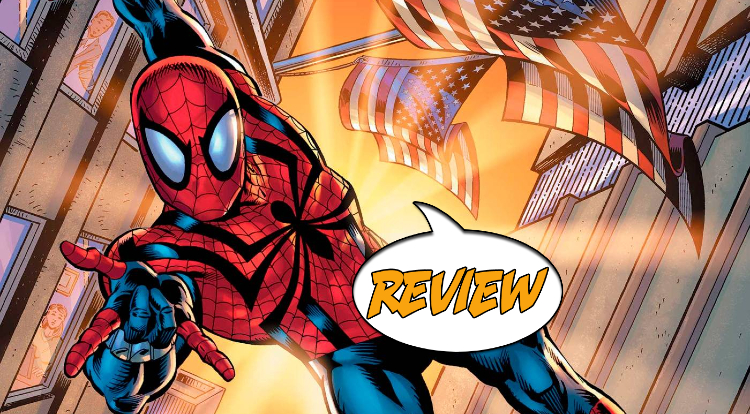 Once upon a time, Peter Parker thought he was actually a clone, and relinquished the mantle of Spider-Man to his “brother,” Ben. Your Major Spoilers review of Ben Reilly: Spider-Man #1 from Marvel Comics awaits!

Previously in Ben Reilly: Spider-Man: Darkness looms over New York City as murders begin to pile up… but how are they all connected? Do the answers Ben is looking for reside in the haunted halls of the Ravencroft Institute? Find out as we return to the era when Ben Reilly was the one, true Spider-Man!

Though the halcyon days of 1994 are nearly two decades in the past for us, under the sliding timeline of the Marvel Universe, they were just a couple of years back. It is here that we join the newly minted Spider-Man, Ben Reilly, walking the streets of New York once more. He is accosted by J. Jonah Jameson, who mistakes him for his clone brother, and takes more than a little enjoyment in JJ’s discomfort upon being proven wrong. It’s not long before trouble rears its head in the form of Carrion, an old spider-foe, who has once again escaped the Ravencroft Asylum to run rampant. Ben’s first instinct is to beat him senseless, but when he discovers that Malcolm (Carrion’s alter-ego) somehow called him back into existence, to deal with the grief of the loss of his mom. Ben capitalizes on Carrion’s telepathic powers, sharing the pain of loss and allowing Malcolm to put down his murderous other-self. When he drops Carrion off, the Asylum’s director tells him he needs a couple of friends of his own, a sentiment echoed by Ben’s boss at his coffee shop job the next day. Ben tells both of them that he doesn’t DO friends, especially after five years on the run, but even he is surprised when The Scorpion shows up… in his bedroom!

The first thing that strikes me about this issue is the coloring. It’s over-shaded and too vivid for my tastes, making everyone’s face a relief map of shades and highlights and becoming really distracting early on. By the time Ben leaps into action on page six (wherein Spider-Man makes his first costumed appearance, with muddy dark blues, oversaturated reds, shadow effects, and highlights that don’t seem to come from any light source), I’m officially turned off by the art. Baldeón’s work on Domino a couple of years ago was wonderful, but for some reason, that doesn’t carry over here. Luckily, DeMatteis’ script is intense and emotional, focusing on Ben’s similarities to the villain in play and the empathy at the heart of Spider-Man’s adventures. The resolution to the fight is refreshing and ingenious and having similar conversations in and out of costume really brings home the emotional stakes. It also works well to differentiate between Ben and Peter’s approach to the costumed hero game.

BOTTOM LINE: NOT FEELING THIS ART

All in all, though, Ben Reilly: Spider-Man #1 is a relatively successful venture even with the coloring issue, thanks to the strong scripting and some solid storytelling chops in the art, but I can’t help but feel it could have been even better than 3.5 out of 5 stars overall. I’m not sure whether this book is trying to target older fans who remember Ben’s run, new fans picked up since his return in Amazing Spider-Man, or someone else entirely, but that’s not really something that affects the story’s enjoyability.

DeMatteis, as always, crafts a really fascinating script but somehow the combination of a Baldeón's new style and the over-produced colors really brings the visuals down for me.