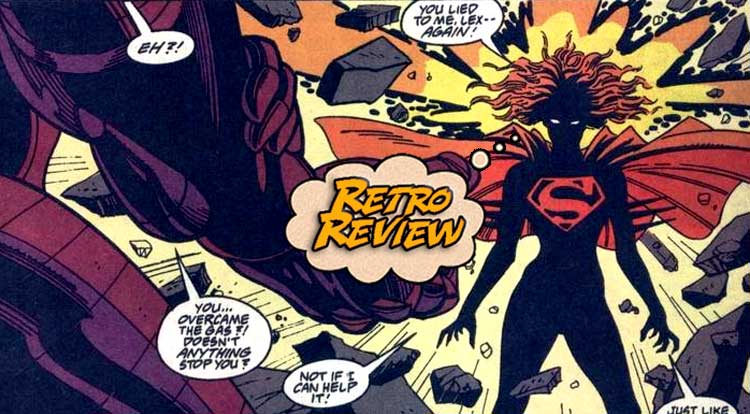 And then, this one time? Supergirl went evil and her costume… Well, you’ll just have to see for yourselves. Your Major Spoilers Retro Review of Supergirl #4 awaits!

Previously in Supergirl:  The Crisis on Infinite Earths made a lot of big changes to the DC Universe, but one of the most influential was the excision of Clark Kent’s youthful career as Superboy. This caused a domino effect throughout the DC line, irrevocably messing up Legion of Super-Heroes history, and leading to the revelation that the “Superboy” from LSH history was a denizen of a pocket universe created by The Time Trapper. That universe’s Lex Luthor created a protoplasmic entity called Matrix that could shapeshift itself into a female form, a new version of Supergirl. (Kara Zor-El, the original Girl of Steel, was also removed from existence by the effects of the Crisis.) When her pocket world was destroyed by Kryptonian criminals, Superman brought Matrix to New Earth, where she fell in with another version of Lex Luthor, becoming his bodyguard, and falling in love with him. Things took a dark turn, though, when Supergirl discovered that Lex had harvested her genetic material to create an ARMY of obedient Supergirls, completely betraying her trust.

Now, she’s out to rectify the situation. Proving the old adage about a woman scorned, Matrix/Supergirl methodically begins destroying Luthor’s facilities, forcing Lex (who is currently posing as his own son, Amish beard-aficionado Lex Luthor II, for byzantine reasons) to try and talk her down.

It… doesn’t go well for him. If you asked me to come up with a stranger art team than June Brigman (whose art is delicate and full of swoops and curves, as seen in her run on Power Pack) and Butch Guice (who is all hard angles and sharp edges), I’d be hard-pressed to answer. But somehow, the combination of their styles is quite lovely. I remember not wanting to pick up this title back in ’94 because of the Kerry Gammill covers, but the interiors look really good. Even the over-the-top ’90s elements of Supergirl’s costume (which are explained in-universe as a side-effect of her agitated mental state) look okay under their combined pens. As for the story, Supergirl continues destroying LexCorp labs until she finds where Lex himself is holed up. Except, he’s bluffing.  it’s a hologram, as the real Lex is dying due to side-effects of his home-brewed cloning process. (This actually means that the Supergirl clones she’s so mad about aren’t viable either, which I think is dramatic irony.) The resulting explosion is followed up by Lex’s stormtroopers, who leave Supergirl as a puddle of goop in the wreckage of the lab. Except SHE’S bluffing! It turns out that Supergirl has learned a few things about lying from her erstwhile boss, heading straight for LexCorp Tower where she confronts the dying Lex about his nefarious ways. One knockout gas attack later, he’s escaping in a battle suit, only to have the enraged Girl of Steel rip it apart and throw him to his death!

Or, at least to what would have been his death, had Superman not heard their clash and flown in to end the conflict. Superman’s parting words bite deep into the decrepit Luthor’s psyche, while Matrix flees to Smallville and the Kent family farm, where she would stay until she accidentally bonded with a literal angel a couple of years later (but that’s another story.) Supergirl #4 isn’t the last time we’ll see the bladed Dark Supergirl look, but it does a lot of legwork to make sure that there is a story reason for her zeitgeisty grimdark ’90s makeover, as well as providing an emotional reason for her to break her Luthor ties once and for all, with unexpectedly well-done art rounding out a better than average 3 out of 5 stars overall. If nothing else, it’s a window into a particularly vivid and strange era of super-stories.