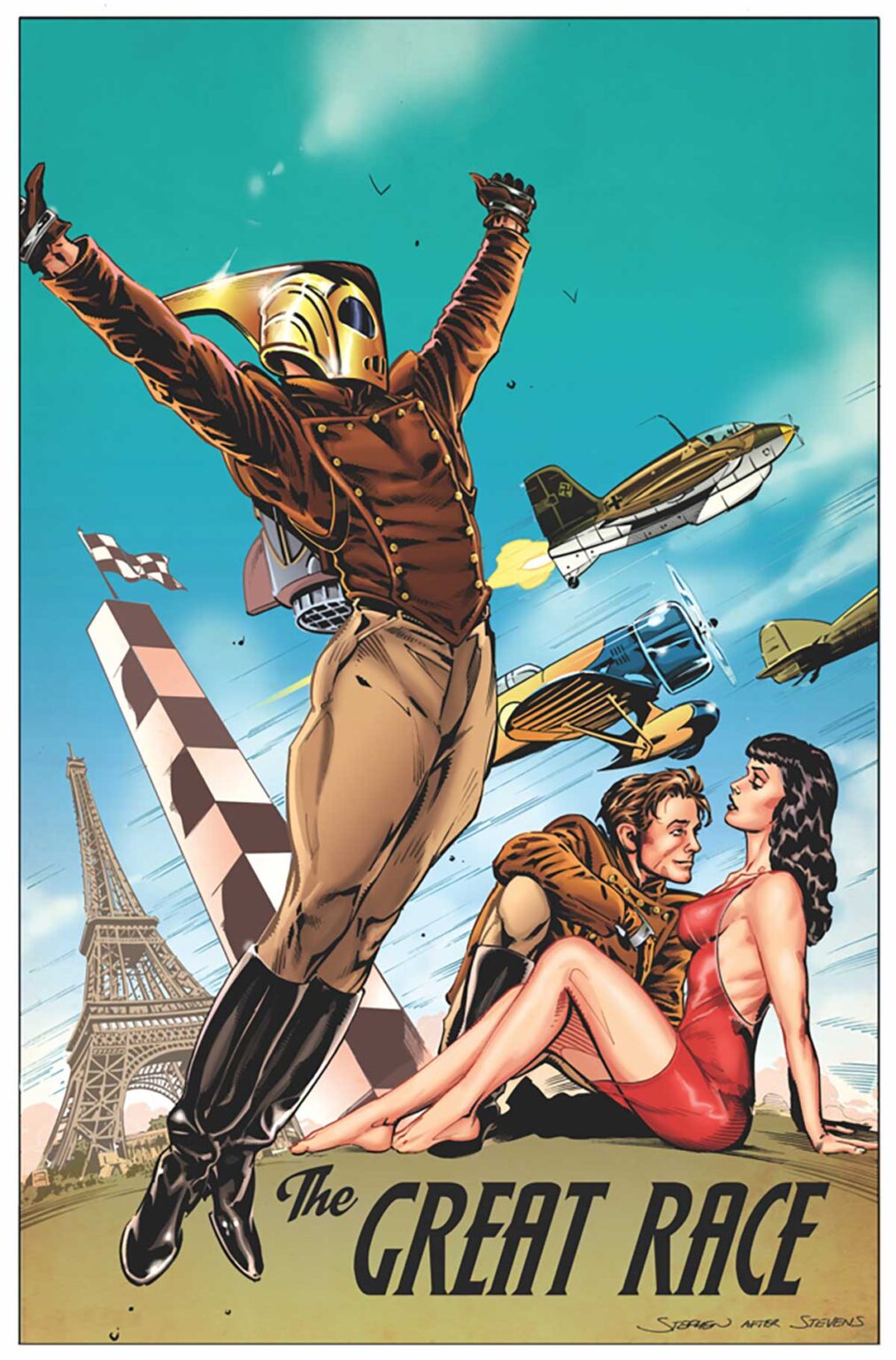 Get ready for the third installment of the legendary Baldur’s Gate video game with these adventures featuring some of the series’ most beloved characters: the ranger of dubious sanity, Minsc, and his miniature giant space hamster, Boo!

After decades spent in magical stasis, Minsc and Boo awaken in a Baldur’s Gate that is very different from the one they knew, but there will always be evil in need of smiting! SMITING! And while they’re perfectly capable of kicking the butt of badness to the Spine of the World and back on their own, it never hurts to have a little help from their companions, the rest of the Baldur’s Gate heroes. Now, say it with us: “Go for the eyes, Boo!” HIGH STAKES Part 3! The next great G.I. Joe: A Real American Hero event! As Cobra remains busy establishing its corrupt casino operations on Cobra Island, the warriors of G.I. Joe are equally busy attempting to covertly infiltrate their arch enemy’s latest evil scheme. New and classic heroes and villains will fill the pages (including some shocking appearances!) as the fan-favorite creative team of Living Legend Larry Hama and SL Gallant kick off the road to issue #300 here!

Order 10 copies and get one free variant cover Netho Diaz! Additionally, the issue will contain stories and essays by creators who were influenced by Hama as well as a fourth wall-breaking short story written by Larry himself, celebrating his unparalleled four decades of work on G.I. Joe: ARAH. G.I. Joe has tracked down Cobra’s new island base—and is making plans to invade! The Joes are determined to rescue Duke and regain everything that Cobra stole during their recent attacks in France, Japan, and the United States. Meanwhile, Cobra Commander’s temper leads to a misuse of his new source of power, one that might just expedite a showdown between his ruthless organization and America’s elite special mission force! Join us for the penultimate chapter of this four-part storyline, “A Little Island Getaway!”

Order 10 copies and get one free variant cover by Will Meugniot! Godzilla Vs. The Mighty Morphin Power Rangers #2 (of 5)

Godzilla battles the Megazord . . . and no matter who wins, the world will be at great peril from the combined threat of the Xilien invaders and Rita Repulsa! And if a giant robot and a giant monster weren’t cataclysmic enough, how about Gigan—a cybernetic space monster ready to fight them both?

Order 10 copies and get one free variant cover by Freddie Williams II! The Resolve Class: The unique class composed of bots from different backgrounds with one shared feature—a specialty in problem-solving. (Or assassination, as some prefer to call it.) And it’s up to the Resolve, the Lurk, and a small team to solve the greatest problem in the galaxy—the Artisan Wraith, an unbeatable mind in an unbreakable body, currently serving as ruler of a planet of criminals. What could go wrong?

CELEBRATING THE 40TH ANNIVERSARY OF THE VERY FIRST APPEARANCE OF THE ROCKETEER!

in paranoia over the looming war in Europe. Having finally had enough of his near-death scrapes as the high-flying Rocketeer, the only thing in Cliff’s crosshairs is The Great Race: a prestigious, winner-take-all air race that runs from California to France! Maybe it’s finally time to smarten up and fly straight . . . by taking his best girl Betty to Paris! But other parties want to win the race for their own nefarious ends, and Cliff will need to decide which prize is truly the most valuable of all.

BONUS FEATURE: Each issue will contain an oral history—featuring Dave Stevens’s friends, family and fellow artists—all culled together by Kelvin Mao, longtime friend of Stevens’s and the director of the forthcoming documentary on the beloved artist!

Order 10 copies and get one free virgin variant cover by Gabriel Rodríguez! The road to issue #50 continues here! Enjoy a TEN-ISSUE-LONG adventure leading up to the EPIC SHOWDOWN in milestone issue #50.

Things are looking up for Sonic and friends! Tails and Belle have been running tests on a friendly Motobug and hope to use their findings to reprogram other Badniks to be good. Without his robotic minions, Dr. Eggman’s forces are weakened, but when a signal causes the Badniks to go wild, Sonic, Tails, and Belle unknowingly set out to defeat a foe mightier than Eggman.

Order 10 copies and get one free variant cover by Nathalie Fourdraine! Star Trek: Discovery—Adventures in the 32nd Century #2 (of 4)

The exclusive comic tie-in to the hit show continues here! Learn more about the pasts of Adira and Gray, how they met, and the events that led to their arrival on the U.S.S. Discovery!

Order 10 copies and get one free variant cover by Aaron Harvey! Dive deeper into the world of Star Trek with another extra-long issue focusing on the memorable aliens of the franchise!

This month: Follow Quark on an unforgettable adventure to Ferenginar, where mother, brother, and brother challenge the very core beliefs of Ferengi culture. Witness Ferengi history change forever in this can’t-miss issue!

Order 10 copies and get one free variant cover by Alexandra Beguez! Captain Jean-Luc Picard and the crew on the ISS Enterprise-D have achieved their goal: conquest of the planet Faundora and its unparalleled shipbuilding capabilities. Now, almost two years later, Picard’s armada nears completion, but not without difficulties . . .

Order 15 copies and get one free variant cover by Mark Alvarado! Donatello and Alopex infiltrate the lab of Dr. Jasper Barlow in a bid to ward off the next attack of the Punk Frogs! What our heroes find in the lab will shock them and reveal a connection to a villain of the past . . . but first they’ll have to defeat some deadly NEW villains!

Order 10 copies and get one free variant cover by Erik Whalen! Turtles event of the year incoming! Catch up on all the essential backstory with this special-edition reprinting the TMNT Annuals from 2020 and 2021! The Rat King’s diabolical plan and its even more fiendish players are all assembled right here! Cybertron is under siege. Carnivorous Insecticlones and rust worms are eating the planet. Exarchon is returned, but Megatron’s not giving up without a fight. Against impossible odds, Optimus Prime, Ultra Magnus, and Bumblebee must make an unthinkable choice: Is Cybertron even worth saving?

Order 10 copies and get one free variant cover by Nicole Goux! The Children of the Vok make their presence known, causing the Predacons and the Maximals to put aside their differences and team up. But that is easier said than done. Will Optimus Primal and Megatron bury their feud once and for all? Or will they let petty disputes end everything they hold dear?

Order 10 copies and get one free variant cover by James Marsh! This collection of three stories centers on the characters we know and love from the IDW Transformers: Beast Wars series with some fun surprises and adventures. Featuring fantastic creative teams and wonderful art from Phillip Johnson, Sam Maggs, David Mariotte, Nick Marino, and more!  This annual is a fun glimpse into the Cybertronian’s lives outside of their main series adventures.

Order 10 copies and get one free variant cover by Lanna Souvanny! The origin of Exarchon revealed! Find out the secret history behind one of Cybertron’s greatest threats, the Threefold Spark. As Exarchon looks for a third body to make himself complete once more, he also receives backup that could prove devastating to all who oppose him.

Order 10 copies and get one free variant cover by Joana Lafuente! “Blood Wings” Part 2! Usagi is captured by a deadly group of bat ninjas, and with an entire village’s survival at stake, Usagi must figure out a way to outwit his winged captors! The end of a classic Usagi story, now in all-new color!