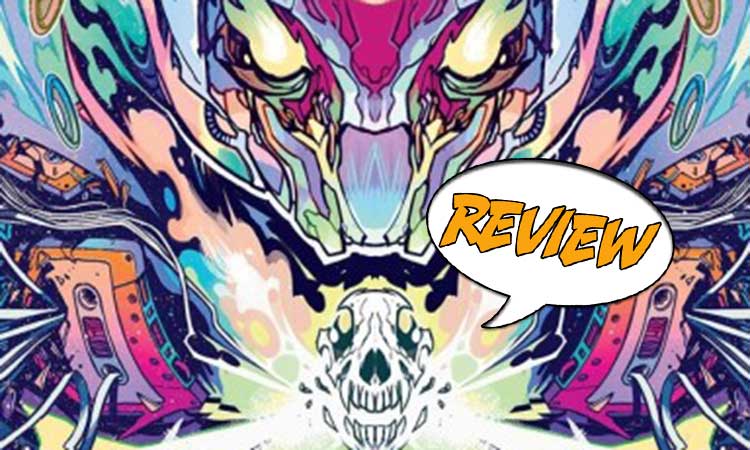 Ami returns to the Old James House to fight against Meg in the Nuclear Bastard. But something is still missing from it! Find out more in Home Sick Pilots #11 from Image Comics!

Previously in Home Sick Pilots: Ami was drawn into the Old James House, helping it to relocate its ghosts who became scattered when their objects were removed from the house. Through her, the ghosts found a way to work together and even animate the house. Meg was selected to pilot the Nuclear Bastard, a giant mecha also powered by poltergeists. Meg is determined to take down Ami and avenge her friends who were killed by the Old James House.

Home Sick Pilots #11 is the beginning of a new arc, and I am happy to say that it is a terrific jumping on point. This is a ghost story like you’ve never seen before, and the central premise involves using poltergeists for their destructive powers. The issue opens as the Nuclear Bastard comes face to face with the Old James House. Ami steps inside, and Rip and Buzz are drawn in with her. Buzz wonders if they are dead. Rip has had this experience before and explains that they need to get to where Ami is acting as pilot.

As the two ghost-powered bodies slug it out on the beach, the narration is Ami explaining how this walking haunted house works. This is why it is easy to join the series here, but it is also nice for returning readers. What I particularly like is the examination of how each ghost has its own peculiar abilities and how those have been harnessed to turn a house into an entity that can walk and fight on its own.

She also explains Meg and the Nuclear Bastard, which was made from the ghosts of the Nevada Testing Site. That is a lot of power and a lot of trauma, far more than the six ghosts currently inhabiting the Old James House.

But the Old James House used to hold seven ghosts, and Old James mentions this to Ami. Before she has time to consider this, Meg calls out to her. She intends to destroy the house but wanted to give Ami a chance to get out. Now she reconsiders. Ami seems too connected to the house, so Ami must have had a part in killing the other members of her band.

Ami tries to get her to at least move the fight further away from the city and people. Meg does not care. They already sent police to try to stop her. She killed them, and they are part of her power now. She continues to lay the blame for even this at Ami’s feet, and Ami realizes that Meg is no longer in control of her ghosts. Her machine contains a microcosm of the suffering of America.

The Old James ghost gets Ami’s attention. She tells Rip and Buzz that there is a missing ghost that needs to be returned to the house. Somehow it is the key to this battle. They need to find it, and she is sending the Old James ghost with them. She runs away from Meg and shoots the group of them out. Now they must figure out what they actually need to find.

The art of Home Sick Pilots #11 is vivid and imaginative. The Old James House is an interesting design. It’s a vaguely humanoid giant body that looks weighty and cobbled together. I like that it keeps a lot of house details. It has windows, for example, and balconies. Its shoulders are shingled. It is not the least bit streamlined, like the Nuclear Bastard. It is made from the wood that made it a house and those have a finite length. They are also straight, so anywhere there are curves to the House’s form, the boards stick out. Inside, it has a much more organic feel.

I like the use of color throughout. We spend a lot of time among ghosts, and their signature color is magenta pink. In the Old James House, it is the color of the interior light that gives the windows a glow and clarifies the details of its construction. In the Nuclear Bastard, Meg is covered with armor in that color, an armor that is akin to solidified blood, or perhaps the embodiment of her ghosts. The real world is colored in cooler tones, but where the fight occurs, the actions of the ghosts are heralded by their signature color.

Home Sick Pilots #11 is solid and exciting. We may now understand more about how the ghosts work, but there is plenty more to uncover. This sets up the current arc in a way that is engaging and makes me want to find out more.

Can the handful of ghosts in the Old James House withstand the power of the Nuclear Bastard?