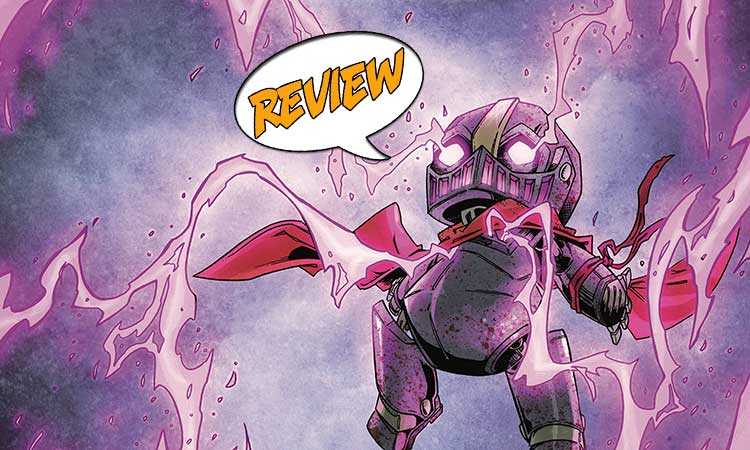 Canto stirs the Vikus to fight the Furies’ army, but the Furies themselves are another matter. Are the allies strong enough to take them on? Find out in Canto III: Lionhearted #5 from IDW Publishing!

Previously in Canto III: Lionhearted: Canto and Aulaura find the Vikus who threaten to throw Canto down a crevasse if he doesn’t tell them how he found them. He tells them the truth, and Rune, the leader of the Vikus, decides he would like to read over the books and scrolls Aulaura brought with them. It turns out that Rune is one of Bodil’s sons and the only one who survived. He resents the fact this his brothers were killed, and even more, he resents the fact that their mother fled. Canto challenges him to defy the Shrouded Man instead. Rune agrees to let him address the Vikus. And in the Frysta Wastes, the Fury arrives with an army.

THE BATTLE IN THE FRYSTA WASTES

Canto III: Lionhearted #5 opens right at the brink of battle. I like the way it juxtaposes Canto’s address to the Vikus, where he tells the story about the knight who failed at his quest, with Canto ordering the Vikus to prepare for battle. The Fury still wants vengeance for her sisters. But the fascinating thing is that, as we learn more of the story of the Knight, we realize that it is the story of the Shrouded Man.

The Vikus hear Canto’s story and decide that their enemy is the Shrouded Man, or at least the Fury’s army. Her sisters join her in battle, and it soon becomes apparent that defeating the army alone is not enough; they must take the fight straight to the Furies. Canto takes on the Red Fury. Aulaura and Rune take on the other two. Their weapons are useless. The Red Fury seizes Canto and gives him the opportunity to give up the Shrouded Man’s heart willingly. Otherwise, she will have her sisters drop Rune and Aulaura to the creatures below.

Instead, he bids her to touch the heart and learn the truth about her past. She cannot resist, and we are immediately taken to their past. Once, there were three sisters who, their mother being dead, were raised by their father, whom they loved. As he grew older, he started losing his memory. Then, one day, a mysterious sorcerer offered them a trade. He would see that their father was spared this fate, if they would return with him to the Emerald Tower. He took their love and their memories, and they became the Furies. They never knew what happened to their father. But will knowing the truth be enough to turn the Furies against the Shrouded Man?

A CONTRAST IN DETAILS

Canto III: Lionhearted #5 primarily takes place during a large battle and the art excels at depicting this. From the beginning where Canto addresses the Vikus from an elevated position, and we see him through a forest of lifted swords to the climactic moment when the Red Fury grabs him, every page is tense and dynamic without being overly gory. The mix of long shots and close-ups reminds us of the formidable scale while drawing us in to the individuals we care most about.

I’ve written before about the fabulous flowing capes that people have in this book. That holds true here as well as their lines not only emphasize the action in panels, but also work to draw the eye from panel to panel. Something I really like in this issue is that the movement of fabric also plays a significant role in the Furies’ story even though it is not a fight. The Shrouded Man’s presence, signified by his cloak, fills the panels, almost smothering the three young women, the women he is ultimately cheating into slavery. We can almost feel how insidious, even suffocating, this trap is.

BOTTOM LINE: GETTING TO KNOW THE ENEMY

I like how Canto III: Lionhearted #5 takes the original story that meant so much to Canto and keeps adding details to it, changing it gradually into the story of the Shrouded Man. The more they become enemies, the more they also become different interpretations of that story.

It will take more than the Vikus to challenge the Furies!