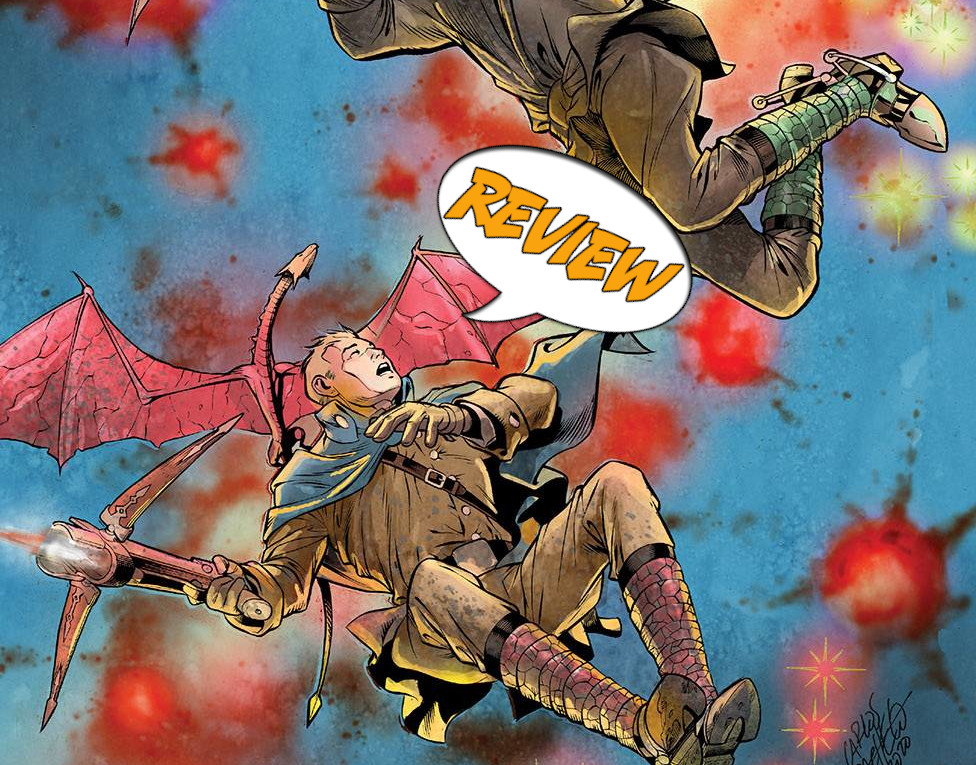 Kurt Busiek and Carlos Pacheco return to bring back their hit series from the early 2000s! Find out what Fletcher is up to in Arrowsmith: Behind Enemy Lines #1 by Image Comics!

ARROWSMITH: BEHIND ENEMY LINES #1 (OF 6)

Previously in Arrowsmith: Arrowsmith introduces an alternate timeline during the First World War. Instead of guns and planes, the war is fought with magic, dragons, and vampires! Fletcher Arrowsmith is an airman who flies around with his trusty dragon Hilda. Through a spell, he can transfer Hilda’s ability to fly himself and wage war in the skies!

Arrowsmith #1 begins with Fletcher going on a mission. We see him preparing for flight, casting his spell, and attacking enemy fliers! However, he is hit and loses altitude. Luckily, he uses slow-fall magic before he hits the ground. The story then takes us six weeks before where Fletcher is in London. Fletcher is on a brief break and is acting as a courier. After delivering a message, he meets his old troll friend Rocky. Going to get a drink, they head to a pub that serves servicemen, but some people are uneasy with Rocky’s presence. After a bit of catching up, some soldiers try to kick Rocky out and send him to a “troll-pub,” and Arrowsmith proceeds to start a fight. Before it escalates, Rocky bellows a threat and picks up a pallet of heavy barrels!

While this incident was isolated, Fletcher caught some attention from a group of people that wanted him to go on a mission. This secret mission somehow involved trolls and going behind enemy lines. In the present, we learn that the reason he was shot down was a ruse to get into enemy territory. After setting Hilda free, Fletcher is found by enemy soldiers.

NOT A BAD START

I vaguely remember this series when it first came out. The premise is exciting and unique, but I never had a chance to read it. As I learn more about the story, I think there is a ton of potential. Arrowsmith #1 has a great hook. We are introduced to a world that doesn’t need a lot of world-building and still feels like a fantasy. We mention places like Verdun and Prussia and immediately know the context. And those of us who are familiar with fantasy won’t have trouble understanding what a dragon or troll is. What lacked a bit was a clear indication of the theme. We have a hot-headed protagonist ready to start a fight to protect his friend. Fletcher is also willing to go on a top-secret mission. But I am unsure if we are looking at a hero’s journey or a subgenre of YA.

I really enjoyed the art in Arrowsmith #1. I appreciated how the comic was colored and how beautiful this art style is on the page. But I struggled with the lettering in places. Maybe it was the review copy I got, but the book’s cursive “journal sections” were challenging to read the first time. My second read-through was a bit easier to understand. Not sure if that is a “me” problem, though, and it isn’t enough to turn me away from the series.

I really enjoyed Arrowsmith #1, and I think there is a ton of potential. If the series continues with this momentum, this will be a top series of 2022. Looking forward to seeing whatever happens next. 4 out of 5 stars from me.

Arrowsmith: Behind Enemy Lines #1 brings back a classic story from the early 2000s excitingly and engagingly!