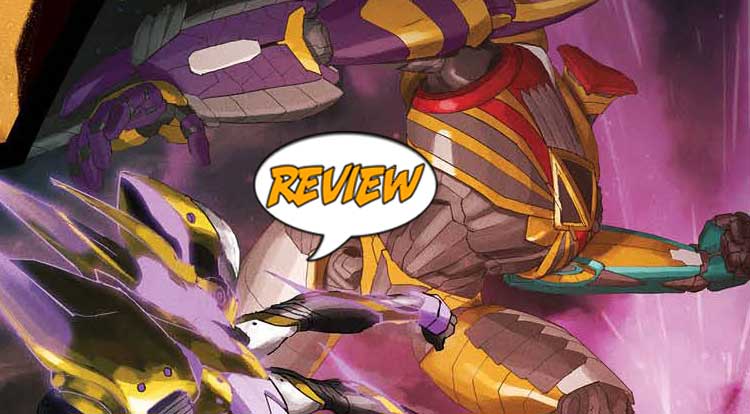 The Empyreals have the Rangers on the ropes.  Zedd is facing his oldest friends, now his most implacable foe.  It feels like this is the end…  Your Major Spoilers review of Power Rangers #15 from BOOM! Studios awaits!

Previously in Power Rangers:  With the fate of Earth and the Zeo Crystal hanging in the balance, unexpected alliances are formed to stop the Empyreals and their master.  On Earth, the Zord battles continue, culminating in the Omegazords finally coming together in a never before seen form!  Will it be enough when all seems lost? Who will stand victorious as the Eltarian War comes to a close… and who will die?

All the Rangers have come together to defend the Earth against the cosmic threat of the Empyreals, forcing White Ranger Tommy and his replacement, Green Ranger Matt, to work together.  Faced with such power, they combine the Dragon and Tiger Zords into a new, more powerful configuration, allowing them to defeat the Orange Empyreal.  This frees the Blue Emissary (the guardian of the blue energy of the Morphin’ Grid) to help the Omega Rangers combine their Zords into the Ultra Omegazord, dispatching another Empryeal.   While all the giant robots fight it out, Zartus finds himself confronting Zordon and Zophram, once his best friends, even offering to team up with Zophram (now known as Lord Zedd) to kill Zordon once and for all.  Just when it seems like things might be turning in the Rangers’ favor…

ZEDD & ZORDON: SIDE BY SIDE?

This issue is pretty much all action, but I appreciate how many character moments we get throughout.  Jason and Zack joke about who gets to make the bad puns in battle, while Matt and Tommy finally come to terms with their rivalry, at least a little bit, learning to work together.  The meat of the drama, though, comes when Zordon and Zedd are forced to work together to take down their former commander, using their new abilities as disembodied energy being in a robot shell and monster sorcerer, respectively.  It’s a well-constructed narrative, matched by interesting art from Mortarino and Renna.  The designs of the Omegazords have been atypical from their debut, but their combined Megazord is likewise ingenious in structure.  The storytelling from panel to panel flows well, and even though the only non-Ranger, non-robot, non-Eltarians seen are Bulk and Skull, even they look good in their on-the-spot video stream.

BOTTOM LINE: IT’S NOT OVER JUST YET

In short, Power Rangers #15 takes what we expect from the last ten minutes of an episode and ups the ante, providing impressive visuals and an unexpectedly deep story behind the robot/monster fights, earning 4 out of 5 stars overall.  The surprise final page makes next issue a must-buy for me, while the back story for Zordon and Lord Zedd is itself the kind of lore that I watch Power Rangers/Super Sentai for in the first place.  This is a good one.

All-out action, with the appropriate amount of twists and turns for a Power Rangers battle sequence, meaning that even though we expect our heroes to win, it's easy to get drawn into the story and worry about Angel Grove.