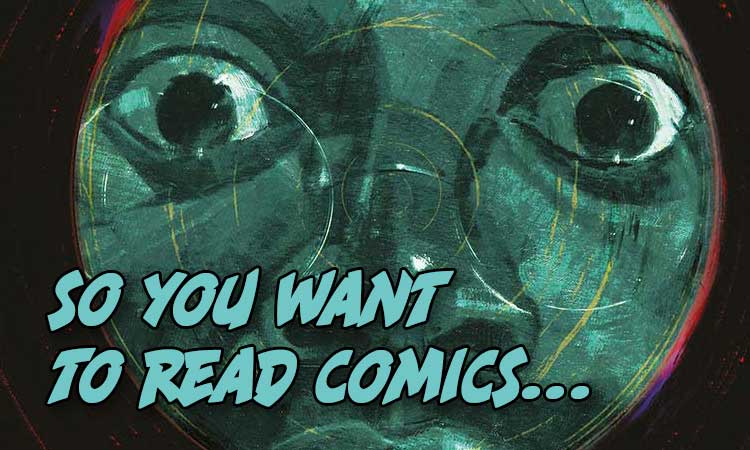 So You Want To Read Comics: Music Edition (Part 2)

Play it again Sam, and by “it” we mean “So You Want To Read Comics”.  This is our weekly feature where we take a look at a single topic and then give you a pair of comic book recommendations, perfect for new readers, based on that topic.  This week, we’re taking another spin at comics for music lovers.

Awhile back we took a look at a couple of comics that epitomized and utilized music in various ways (here).  But let’s be honest, with a subject like music, we’re just not going to be able to cover it all with just two recommendations. But, for this one we’re going to take a look at some of the ways that comics have begun using music as a part of the product.  For example, it’s not uncommon anymore to find comics that have links to Spotify playlists that you’re supposed to listen to as you read, with these songs lining up with scenes in the book (fun fact, The Wicked + The Divine which was featured in the first music edition of this feature has a playlist with over 300 songs).  Also, things like motion comics also utilize music and limited animation to enhance the reading.  Basically, with the availability of technology needed to share and listen to music being what it is, comic creators have the ability to make the act of reading a comic a more fully realized experience.

So, let’s check out some more recommendations for the music fan out there that wants to check out comics.

Right off the bat, I’ll warn you, this is a horror book.  I understand that this is a dealbreaker for a lot of people, but if you’re still there, here’s the lowdown.  Blue In Green is a graphic novel that focuses on an ex-jazz musician who’s come home after a death in the family.  During his time at home he starts to chase down a mystery that takes him right through the heart of Jazz history and the rise and fall of a local music scene.  But, as he gets deeper into things, the more terrifying his reality becomes.  Music essentially is what sets this one apart from any other psychological horror.  Tying this mystery to the ins and outs of the music industry, the obsession that comes with creating music, and the way certain music ties families together, for better or worse, transforms this into a truly unique story.  Not to mention its beautiful visuals which have a hand painted feel to them and manage to both show what’s happening and hide it all at the same time by being able to switch from stark reality to swirly dreamlike colors that confuse and distract. It’s definitely something to check out.

Royal City is the story of a man who returns to his hometown and is almost instantly drawn back into all the turmoil and webs his family has created for themselves and him. As he tries to come to terms with the present state of his family and life, he is also constantly combatting flashes from his past and visions of his brother who passed.  Now, you might notice that in this description I don’t mention music.  That’s because this one isn’t really about music.  But, the creator Jeff Lemire, put together a playlist that is designed to be a companion to this series (here) and it’s really effective.  Think of it like the movie Dazed and Confused, that movie isn’t about music either, but it’s almost impossible to imagine it without some of the tracks that appear on its soundtrack, they become integral to it.  This playlist too has the ability to be that for this book and make it a far more engaging experience than simply reading it.  Plus, it’s a critically acclaimed comic book series, so even if the songs aren’t doing it for you, it’s a quality read.

So what’s some of your go-to reading tracks? What did you think of these suggestions? Let us know in the comments section below.