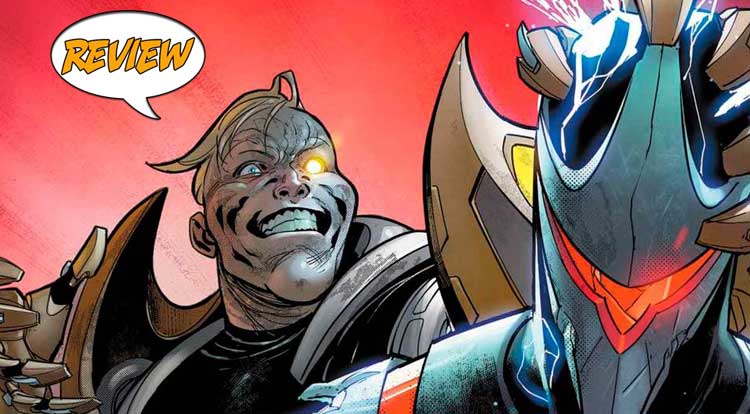 The new Darkhawk has made an impression, and now a villain wants the secrets of his power.  Your Major Spoilers review of Darkhawk #5 from Marvel Comics awaits!

Previously in Darkhawk:  Someone very close to the new Darkhawk has been killed.  And the murderers are finally within his grasp for revenge!  But will this defining moment set him up to be Marvel’s next great hero… or its next great villain?

After the tragic events of last issue, we open at a funeral for Darkhawk’s best friend Derek.  It’s an awkward event, as the press is covering the event, thanks to Darkhawk/Connor’s status as a top basketball prospect. Derek’s sister finds all the coverage disrespectful, while Connor himself is preoccupied with worries about his health, his responsibility, and most of all his new diagnosis of Multiple Sclerosis. That’s when his former friend Shawn arrives with an ultimatum: Transform and fight him, or watch everyone at the funeral die screaming. There’s only one answer to a question like that, leading to a superhero fight through the streets of New York.  Darkhawk manifests a new power-cannon from his suit for the win, and Spider-Man arrives just in time to web up the bad guy, which only leaves Connor to worry about… everything else in his life?

THE GREAT LIE WE’RE ALL TOLD

After reading this issue, I remembered what I thought when the original Darkhawk debuted back in the ’90s: He felt like a generic version of The Marvel Method, an attempt to recreate Spider-Man in a new era.  This issue wraps up the new Darkhawk’s debut, and I still feel the same way.  Connor isn’t a particularly likeable character, and while the design of the new armor is interesting, it doesn’t really stand out among the hundreds of Marvel heroes.  The last pages of the issue seem to show us the original Darkhawk, or someone wearing his armor, which makes for one interesting moment, but most of the issue doesn’t really feel unique.  I enjoy the art of Juanan Ramirez, especially the use of wide shots of the hero in battle, but every close up is full of crosshatching and lines that make every face look scratched and dirty.  That’s okay for a hero who just got out of a fight, but less so when we’re looking at a young woman at her brother’s funeral.

BOTTOM LINE: NOT BAD, BUT NOT MEMORABLE

All in all, Darkhawk #5 is a competent ending to the first arc, putting together all the pieces of story and character, and while some pages are quite good, the whole story feels very familiar and the art is inconsistent enough that I’m not as impressed by its potential as I was after issue #1, leading to 2.5 out of 5 stars overall.  The comparison to the original volume of Darkhawk, which never quite gelled for me, is an apt one, as this new take feels equally like an attempt to recapture a lost era with a new coat of paint.

This issue doesn't really stand out in any way, and the sequel hooks at the end don't really feel like something that I'm going to rush right out an demand more comics to resolve. It's all just okay.