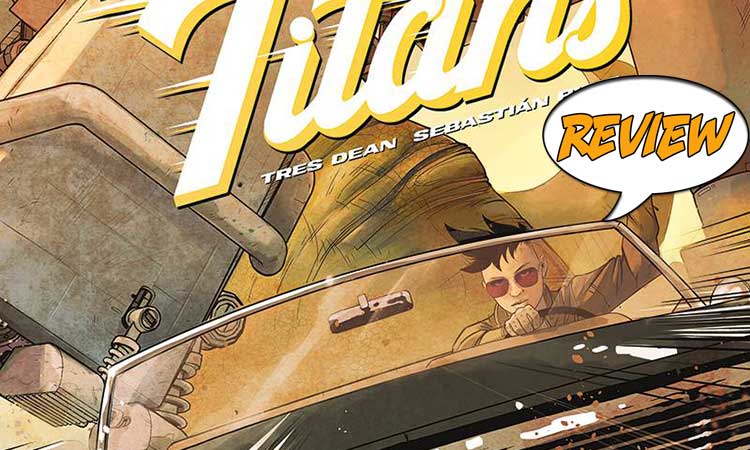 The Hobbs family have protected New Hyperion from kaiju for generations. Kit Hobbs has broken free of this life. What would it take to pull her back in? Find out in We Ride Titans #1 from Vault Comics!

Previously in We Ride Titans: In a world where kaiju are an ever-present problem, the city of New Hyperion is protected by the Hobbs family and the Titan they have piloted for generations. But when all is not well in the family, it could put New Hyperion into danger.

THE COST OF STRESS

We Ride Titans #1 opens with some panels showing us the futuristic city of New Hyperion as people go about their daily lives. All appears peaceful, but the narration is about facing fear, and knowing that you’re the wall. We have no time to wonder against what, as the next panel takes us right into a fight between a kaiju and a Titan.

Dej, the pilot, seems to be taking it pretty casually even though the person he’s talking to, back at headquarters, is more intense. Dej punches the kaiju with his Titan, but then he trips and falls into a building. The kaiju jumps him and now the fight becomes much more destructive. The voice over the headset asks if he has been drinking. Once done with the fight, Dej disconnects from the Titan and walks away.

In another city, Kit’s wife, Jen, gets her up and says there’s something she needs to see on the television. The news covers Dej’s fight with the kaiju and his apparent loss of control over his Titan. This comes at a time when Titan hubs, previously run by families, have been ceding command to their local governments. This hits Kit pretty hard, but she doesn’t want to talk about it.

We learn that Kit is a mechanic, specializing in keeping old cars running. She apologizes to Jen and agrees to make dinner, where we also learn that she is not much of a cook. Her work in the kitchen is interrupted by a knock on the door. It is her mother and immediately we can see there is tension between them. Dej is Kit’s brother. Her mother admits that Dej is not doing well, and even that he was drunk during the recent event. Kit angrily asks why they kept making him do the job? But the Titan has been the family work since back in the early days.

Jen comes home. This is her first meeting with Kit’s mother, which is awkward to say the least. Kit’s mother leaves. Dinner has boiled over. Kit knows her family want her back to pilot the Titan, and we can see that she thought she had left that life for good. It’s a difficult decision, but Kit feels she has to go back. Jen is understanding, and we really feel that she is one of the rocks in Kit’s life.

Kit goes to New Hyperion to the skyscraper where her parents live in the penthouse. Within a few words, we see she has a conflict with her father, but she keeps her cool and cuts to the chase. They need someone to ride the Titan and protect the city. She’ll do it – on one condition.

THE PRICE OF THE GOOD LIFE

The art of We Ride Titans #1 is stark and clear. New Hyperion is city of clean, smooth lines. It looks futuristic and orderly. The verticality of it speaks of modern cities, but in the way of presenting a utopian façade. Interestingly, Kit’s apartment is in a very similar style. It speaks of someone who wants to be in control of her life, to live it the way she wants to. And Kit presents as someone who has a clear idea of what she wants, and it is not the family business.

In contrast to this, Dej’s fight with the kaiju is organic, messy, and asymmetrical. The kaiju walks on two legs and has two huge, clawed arms. It is thick with rippling flesh. It has spikes and spines and a tail. The Titan, while mechanical, looks as though it has been around longer than the city. We see exposed cables and hydraulics. It looks worn and battered. I like the way it reflects Dej’s struggles and, if we take a step further back, it could be symbolism for the entire Hobbs family. It may still be strong, but is it strong enough?

Right from the start, We Ride Titans #1 has a flavor reminiscent of both Pacific Rim and The Fast and The Furious. It draws us in with the kaiju fighting, then deftly flips the focus onto the people involved. We may not understand them yet, but we can identify with them.

Kit Hobbs has a life of her own, but suddenly finds herself drawn back into the family’s work.