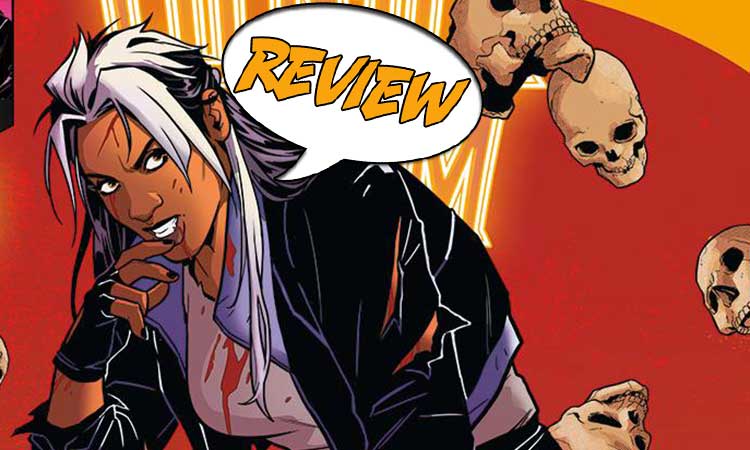 As Angie and the new guy do the weekly protection shakedowns on Gloria’s turf, Sin finds out more about Zach’s plan.  Does she have anything to lose if she goes with it? Find out in Lunar Room #2 from Vault Comics!

Previously in The Lunar Room: Cynthia (Sin) Breaker used to be a mob enforcer for a powerful mage. She also used to be a werewolf. She is trying to live her life and get over her past, but a mage name Zach Zero is looking for some protection, and not only do they think Sin is the person for the job, they think they can help her out.

ON THE FRINGES OF THE UNDERWORLD

The Lunar Room #2 opens in Solar City with Gloria’s new recruit. The narration talks about the importance of reading people so you can tell who has the power, who is just faking it, and who might be afraid. I love how this short comment sets the tone for the entire issue. The new guy challenges a couple kids on the street, shows that he wears Gloria’s pin, and asserts his dominance even while we wonder whether he was running a bluff himself, although he is working with Angie.

Sin continues to struggle with adjusting to not being a werewolf. Without her powers of hearing and smell, she has to learn where she now fits into the pecking order. She also learns more about what Zach is after. They tell her the story of the Lunar Room Shard. A blacksmith, long ago, forged a sword at a time when both moods of this world eclipsed the sun. This imbued the sword with magical powers. This led to the formation of a secret society to keep the sword out of the hands of people who might cause trouble. Zach claims to be a legacy member of this secret society. With the shard of the Sword, which they have, and getting into the Lunar Room, which they know the location of, and getting there on the right day, which is soon, they could become the most powerful mage alive. In turn, they could undo Sin’s curse. It is a bit of an information dump, but it does set up an interesting plot.

Angie and the new recruit continue their day shaking down local business for their protection payments. The payments are in currency more interesting the cash. (For example, a laundromat run by a family of psychic vampires pays in bottled misery.) But other than that, they’re pretty much criminal enforcers. They do hear that there is some word on the street about Sin.

Sin no longer has any connections she made through Gloria, but she has forged some of her own to members of the magic community. Message drops are slow, so while she waits, she decides to beat up the people following her. She may no longer be a werewolf, but she is still strong, and she is able to fight.

Angie reports back to Gloria with the new guy. She fills her in on the issues of the day. It seems like just another typical day. Until the new guy pipes up to ask whether she’s going to say anything about Cynthia.

FULL OF STYLE AND VERVE

The Lunar Room #2 is set in a world where magic and mystical beings abound, although everyday life looks much more familiar. We’re seeing life from the seedy side, the day-to-day street life and shake downs that keep a criminal enterprise running. I like that there are traces of the magic and supernatural, but they aren’t on constant display. The laundromat looks like any laundromat, spare and full of mismatched machines. In contrast, the bottled misery looks decidedly otherworldly, even beautiful in contrast to the business.

I like Sin’s character design. She is hefty, and you can tell that it is muscle. Her hair is dark with lighter streaks and has it a constant, slightly scruffy look. It gives her a flavor of being a stray or being wild. She is prone to anger, and when we see her, we can see the tension and frustration that she tries to keep in check. It is not a surprise when she finds an excuse to beat up the people following her, a brief fight shown in a dynamic double page spread.

The Lunar Room #2 is a gritty urban fantasy tale with hints that an ancient artifact is in the mix. The characters are ruthless, and we cannot ignore the possibility of treachery. It’s a solid read, even if it takes a little time to figure out who is who.

Life in Solar City is tough to begin with, but for a former werewolf, it takes on a whole new level of complexity.