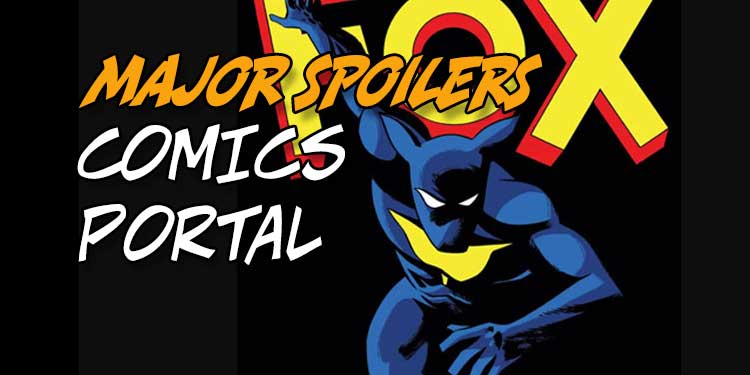 COMICS PORTAL: Return of The Fox

As reported here at MajorSpoilers.com, The Fox is coming back to Archie Comics, bringing a new one-shot featuring a favorite hero of mine!

WHO IS THE FOX? I’m one of those comics readers who loves the lesser-known heroes in this genre. I could mention hundreds of them, but I’ll just toss out a few—The Justice Society of America in DC, The Owl last seen in Dynamite Comics, and The Mighty Crusaders in Archie Comics. In my opinion, they all could sell comics with the right creative team working on them.

So, imagine my delight when I saw that The Fox was getting a new one-shot from Archie Comics! And he’s even being worked on by Dean Haspiel, who was a big force behind his last appearance five years ago! Can’t wait!

Who is The Fox, and what makes him so appealing to me as a comics superhero?

Without getting too deep into this story, The Fox was created in the 1940s by Irwin Hasen, a creator who worked on many superheroes of the day. He’s been around now and again since then, including an appearance that was drawn by Alex Toth, another big name in comics.

It was after this time that Dean Haspiel first pitched what would become the “Freak Magnet” story that appeared in Archie Comics, a company that has tried several times to develop a successful superhero line of books.

Back in 2013, I interviewed Dean about his Fox series, and I enjoyed talking with him about the hero and his take on the guy. The Fox deals with everything out there, from common criminals to the weirder aspects of the comics industry. I enjoyed it!

I was happy to buy the 10 issues he and Mark Waid created, and I have long been hoping The Fox would return, and with Dean Haspiel as at least one of the creators!

My wish has come true, and May can’t get here soon enough for me! Now, I know some people who have already responded by saying, “Who is The Fox? Those ‘minor’ heroes never amount to anything! Stick with the big guys!”

I enjoy pointing out to these people that we’ve already seen many “minor” characters blossom big time over the years.

For instance, not many people remember that Wolverine was considered a lower-tier character back when he first took on the Hulk lo, those many years ago. He was a short, smelly character who, when he first showed up in comics, was a cheroot-smoking, bath-ignoring, “Bub”-saying mutant who barely drew any attention at all until the Uncanny X-Men appeared on the scene with him as a member.

Since then, he’s grown taller, taken baths, put down the cigars, and increased his vocabulary. He may not be quite as popular today as he was just a few years ago, but he remains an important part of the Marvel stable of characters.

Where would the House of Ideas be without their mutants, I often wonder.

Granted, he’s just one of many, many characters who have been introduced to the comics universes, and his experience is something unique among the thousands to maybe millions of superheroes and other characters who have appeared in comics. But just one Wolverine can make or break a creator.

Just consider the guys who made Deadpool! It seems like so many creators had a hand in his formation, at least if you visit a comic convention and look at the banners identifying the talented men and women there! I’m very interested in Mr. Haspiel’s take on where The Fox is now that five years have passed. Like many of us, there have been changes in his life, and that includes having a family now. According to what I’ve read about them, they all are “freak magnets” like their dad. THAT will be fascinating to see!

Of course, many people downplay a one-shot’s importance. “If they really believed in the character, they’d at least give him a mini-series,” a friend of mine likes to say. Well, I tend to be more optimistic—a one-shot is an opportunity for creators to at least strut their stuff for fans to read. Get enough of us on board, and a mini-series could still happen. And if that works out, well, an ongoing title could occur!

I said I was optimistic, right?

I can say right now that if anyone wants to revive any of those beloved “minor” characters, I’m going to support you! I’ll do all I can to make it a success! I’ll promote it on social media, I’ll interview the creators on my podcast, I’ll spread the word in the local shop I frequent and any other place I can!

We need more “minor” characters to succeed, after all! They could help the business, and anything that can help the comics industry grow is fine by me!

What do you think? Are there characters you’d like to see get another chance? Are there creators who could give him or her the treatment they deserve? Do you like The Fox and are interested in this one-shot? Whatever your opinions, be sure to share your thoughts below!