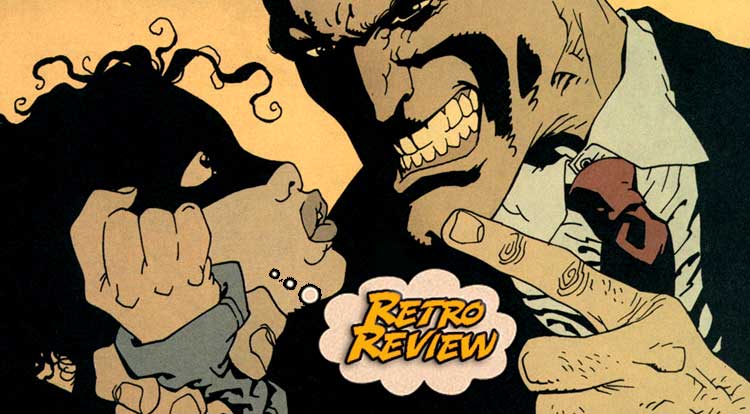 Everything is about to change for Dizzy Cordova, thanks to a man named Graves.  Your Major Spoilers Retro Review of 100 Bullets #1 awaits!

Previously in 100 Bullets:   His name is Graves.  If you’re looking for violent revenge on those who have wronged you, he can provide an untraceable gun and 100 equally anonymous bullets.  He’ll even point you in the right direction, with all the information that you need to find and hit your target.  The hows and whys of it all are still in the future…  Right now, there’s only Dizzy Cordova. This issue actually begins with a disturbing prison shower scene, something straight out of a ’70s exploitation film, but it’s only when she’s released that Isabel/Dizzy’s story becomes clear.  She takes the train back home, getting some harsh looks from members of other gangs, but it’s only when an old man in an expensive suit sits down next to her that she realizes the truth of “never being free.” Agent Graves reads her laundry list of misdeeds, including the drive-by shooting that landed her in prison.  Dizzy is angry, but things get even more tense when Graves explains that the death of her boyfriend and son weren’t accidents, but the work of a pair of dirty cops.  It’s a remarkably tense and effective sequence, but one that is undermined a bit by Risso’s exaggerated faces.  Graves craggy skull reminds me of a Richard Corben drawing drenched in shadow.  It feels appropriate for the issue’s tone, but it’s just hard to read. “…there will be Grave consequences,” he warns her.  If you want to know what I mean about the extreme stylization, look at Dizzy in that final panel.  While it’s successful in conveying surprise, it goes a little bit too far for my taste.  Likewise, Azzarello’s script comes across as a little dated, working hard to give us 1999’s idea of gang activities, which makes if feel as dated as any Bowery Boys film.  Witness Dizzy’s to the garage (chop shop?) where her brother works. I don’t want it to seem like this issue is a failure, though.   As she’s leaving, Dizzy is accosted by a pair of policemen (the very same ones that Graves identified as responsible for her family’s deaths and her later incarceration) and it’s a very impressive sequence.  The evil cops are kept in shadow, showing only their eyes and teeth, making them seem monstrous, while their words are successful in making me want to see them get dispatched by a few untraceable bullets.  As the issue ends, questions abound as to whether her friends are her friends and whether or not her enemies are what they seem.  One thing is clear, though… Dizzy is clearly considering revenge.  I don’t remember seeing 100 Bullets #1 on the stands back in 1999, but I imagine that it might have hit differently then, but it hasn’t aged as well as it might have, earning 3 out of 5 stars overall.  It’s clear what Azzarello and Risso were going for; a noir story that would work with the attitudes and zeitgeist of the pre-Y2K era, but two decades down the line, it feels like it’s trying a little too hard to be edgy, with art that would benefit from a strong inker.  I will say that I remember later issues in a much more positive light, so it may be worth revisiting 100 Bullets in collected format to see if it works better in larger chunks.

Intentionally grotesque, dark and unpleasant, this issue somehow manages to also be strangely uplifting. I don't know that I'd sign on for a long run based on what this issue presents, but it's definitely out of the ordinary.