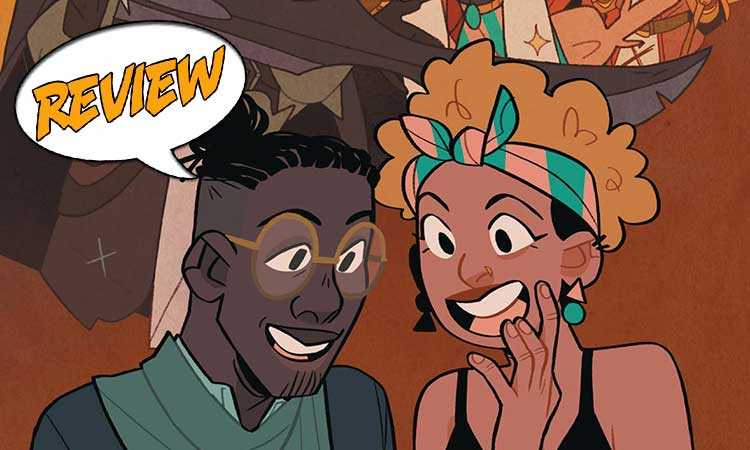 Cass jumps into gaming with relish and even though she doesn’t intend it, her character starts driving the game. How will everyone else react? Find out in The Last Session #2 from Mad Cave Studios!

Previously in The Last Session: Five friends (Jay, Lana, Drew, Walter, and Shen) have the opportunity to finish their first big “Dice and Deathtraps” campaign, the one they started in high school where they all met. This may be their last chance before they go their separate ways after college. The one twist? The DM, Jay, wants to include his partner, Cassandra, a completely new player. Hijinks ensue – but how will this affect the group dynamics?

The Last Session #2 opens with a look back to Drew’s story. Playing the game sparked his imagination and he started writing down their adventures so he could remember them. This is what started him down his path of becoming a writer.

Drew wanted to remember the amazing moments of the game, but in the present day, Cass’ character, Kezz, is serving up some unprecedented action of her own. At the end of last issue, the group was facing a golem. She had the idea of trying to damage it with a shattering spell. And it worked.

A couple more months pass, and Kezz is definitely having an affect on the party. She is a bard who forgets to use her instrument. She is clumsy. She tries to use her skills to do everything, often with unintended consequences, such as when she manages to tame a creature, only to find out it was a cub with an angry (and very large) parent nearby. And then there is the classic “trying to be stealthy” gambit, which goes just about as well as you might expect.

She talks to their potential foes and frequently charms them. She keeps looking for mysteries and clues. She has wild theories about the plot. In sort, she has single-handedly changed the flavor of the game. Everyone recognizes it, but it really hits Lana hard. The game is not the perfect escape she remembered. To her, Cass does not feel like one of them. She insists, though, that the problem isn’t Cass – it’s her character.

CAN THE PAST BE RECAPTURED?

The art of The Last Session #2 flows seamlessly from past to present and in and out of the game. I love that their characters maintain a few traces of the players. Not only can we tell them apart, but you can see that even when they are role-playing, some of the players’ own personalities shine through. This is particularly amusing as we see Cass’ character trying unorthodox things. But the struggle is real – having a new player enthusiastically dabbling in everything and not realizing their unintended effect on the party.

I found it interesting that part of the conversation about Cass/Kezz takes place in character, but later it continues out of character. I liked how each player reacts as Lana tries to get them on her side. Each player has their own reactions, and we can see it in their faces. Shen doesn’t think Cass is ruining the game. Drew thinks Lana is overreacting. Walter reminds her that they all had their moments when they were beginners. They feel so true to life.

The Last Session #2 brings us deftly to the main conflict, one that many of us who play RPG’s can understand. I like the game as a vehicle, but I think the story also works more broadly as an examination of someone new trying to fit into an established group.

Cass is an excited new player, but her enthusiasm inadvertently starts taking over the game.