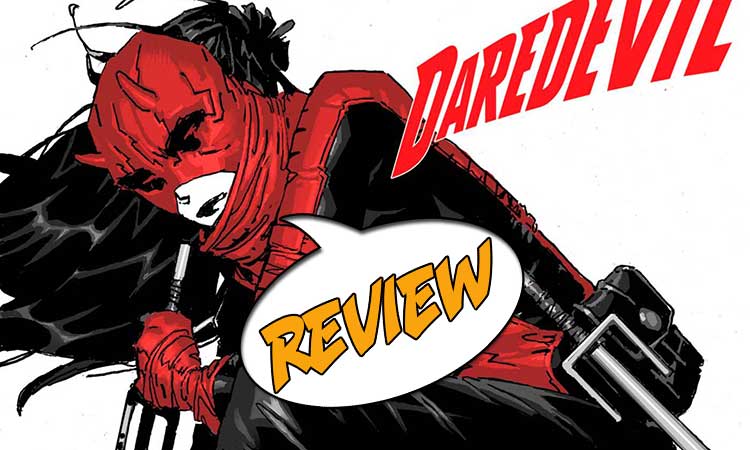 Elektra has found herself in the crosshairs of someone from her past, yet it might not be them pulling the trigger.  Your Major Spoilers Review of Daredevil: Woman Without Fear #1 from Marvel Comics, awaits!

Previously in Daredevil: Woman Without Fear: During Matt Murdock’s most recent stay in prison, Elektra has taken over the mantle of Daredevil, at the same time Matt’s oldest nemesis The Kingpin has outlawed superheroes in New York City.

Daredevil: Woman Without Fear #1 opens up with a silent confrontation with Wilson Fisk AKA The Kingpin.  Through narration it’s revealed that he had a file on Elektra and has sold them off to the highest bidder, including Elektra’s. He tells her that the person who bought it wants to meet her in a very specific location.  Later, she tells Matt about the meeting and how she is going to see if she can find the buyer.  During these scenes we get flashbacks to Elektra’s training with her old mentor Stick and then when she joined The Hand.  While at Columbia College, Elektra sees someone from her past and tries to track her down.  During the pursuit she realizes where this person wants to meet.  Once there she realizes she’s in a trap but is surprised by who actually sprung it.

Daredevil, both Matt and Elektra, have always lent themselves to noir, perhaps better than any other character in Marvel history.  Thankfully, this latest series so far lives up to that pedigree.  Every scene is accompanied with indulgent and metaphoric language, while the protagonist fights themselves just as much as they fight against those around them. There’s violence and sex, but neither is gratuitous. The art is dark and atmospheric, with every character seeming like they’re emerging from shadow rather than the shadows being cast over them.  This issue does spend a good amount of its page allotment showing Elektra’s backstory which for long time readers might be redundant and well-trodden territory, but isn’t too distracting. The reveal at the end of this issue was a little out of left field, but also shows great promise for a really fun story arc in the coming issues.

While typically the characters and action get most of the attention when it comes to work, this one has some really nice background art.  Scenes slide in and out of focus in relation to Elektra’s focus, and once the action of the issue moves from the city to a winter wilderness setting, the snowy forest is depicted nicely in grays and blues.

Even though Daredevil: Woman Without Fear #1, is a continuation of an old plotline and loosely tied to a current ongoing event, it manages to stand on its own while offering a decent way for people to jump onto that particular corner of the Marvel Universe.  The noir vibes are real and used effectively and the art does a good job at enhancing the story.  4 out of 5 stars.

Daredevil: The Woman Without Fear #1 is an excellent first issue that sets the tone for the series and manages to stand on its own regardless of its ties to other series’. A good spot for those curious with what has been going on with Elektra and Daredevil, to jump in.