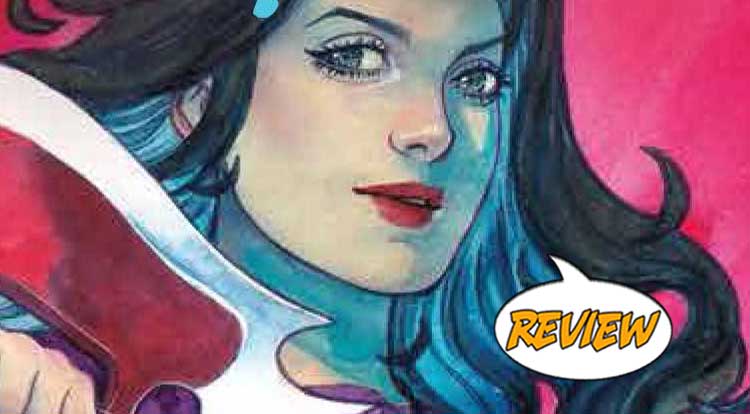 The most powerful villain Buffy has ever faced versus a multiversal team of Slayers!  Place your bets!  Your Major Spoilers review of Buffy The Vampire Slayer #33 from BOOM! Studios awaits!

Previously in Buffy The Vampire Slayer:  The Multiverse Scooby Gang shows up to help fight Silas, now on their own terms.  But their plan is upended when Buffy has her memory stolen and leaves her companions behind to battle him on their own.

DROPPED RIGHT INTO THE CHAOS

After facing down with Silas, the devourer of worlds and memories, Buffy has assembled a group of Slayers from across the universes, including several different versions of herself. Buffy the Vampire Slayer #33 opens on the football field at Sunnydale High, where the army of Buffies and Company meets Silas’ Lurkers, strange canine undead purple things.  That conflict takes up the first half of the comic, as Buffy, Kendra, Faith, the other Buffies, Willow, an alternate Jenny Calendar, and more give and take strikes with sword, axe, and mystical Slayer Scythe.  When things get dire, Willow opens portals into the high school allowing the remaining members of the gang to make a run for it, but it’s never clear what happens to those who don’t make it into the portals.  Sorcerer Ethan Rayne is successful in getting rid of the Lurkers, but loses his soul (maybe?), while Willow is attacked by what seems to be a homunculus made of her own flesh.  Buffy gets the upper hand with a battle axe, but doesn’t see Silas’ final gambit coming.

I have to say, I was completely lost during my first read-through of this issue, a condition that was only slightly ameliorated by reading the previous two issues before my second pass through the story.  A lot of the details leading up to the beginning of this issue’s story aren’t explained in the book, nor is there a clear idea of where all our players from the beginning of the issue end up.  The implication is that they’re killed or out of action, but it’s never made explicit, and it makes the second half of the story feel like it’s only part of the story.  The ending is a relatively successful cliffhanger in spite of this, but I can’t help feeling like it could have been stronger.  Pinti’s art is remarkably delicate throughout the issue, but I find many of the facial expressions to range from inscrutable to completely blank.  The interesting character designs from last issue (including a goth Buffy, a super-buff Buffy, and more) barely get shown in the issue, which leads to disappointment.  I enjoyed the battle sequence of Silas versus Prime Buffy, but even that had some storytelling decisions that made it puzzling.

BOTTOM LINE: NOT BAD, BUT NOT GREAT

All in all, Buffy The Vampire Slayer #33 ends up being a book that requires you be have been reading in order to communicate its ideas, and while that’s not necessarily a complete killer, it lessened my enjoyment, and the art, while interesting, missed it’s mark often enough to affect my enjoyment, leaving the issue with a right-down-the-middle 2.5 out of 5 stars overall.  My understanding of Silas, Buffy’s state of mind, and even the identities of the players in this issue mostly come from reading the previous ones, which makes it less successful as a single-issue read, even as it gives us some fun moments.

A very difficult book to follow, with an odd and off-putting color palette. It reads better if you've been following along for the last six months.