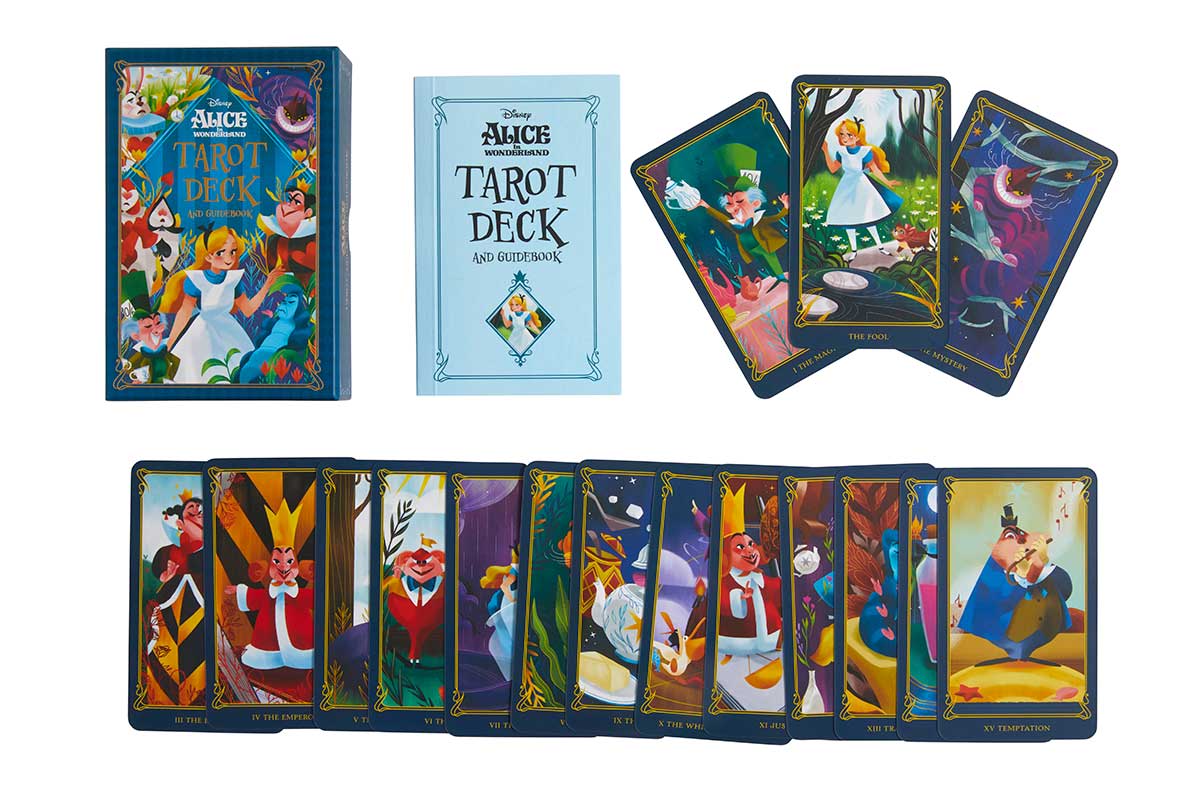 Let Alice, the Mad Hatter, and the Queen of Hearts guide your tarot practice with this beautifully illustrated tarot deck inspired by Disney’s classic animated film Alice in Wonderland.

Experience the magic of Disney’s Alice in Wonderland like never before in this enchanting and delightfully unique take on the traditional 78-card tarot deck. This set features beloved characters from Alice to the Cheshire Cat to the White Rabbit and more in gorgeous original illustrations based on classic tarot iconography. Featuring both major and minor arcana, the set also comes with a helpful guidebook explaining each card’s meaning, as well as simple instructions for easy readings. Packaged in a sturdy, decorative gift box, this charming tarot deck is the perfect gift for the Alice in Wonderland fan or tarot enthusiast. ORIGINAL ART: The booklet and each of the 78 cards in this deck feature never-before-seen original Alice in Wonderland-themed art.

BEAUTIFUL GIFT: The tarot deck and guidebook are packaged in a deluxe gift box perfect for gift giving.

Minerva Siegel is the author of Tarot for Self-Care: How to Use Tarot to Manifest Your Best Self. She writes about subjects such as tarot, witchcraft, and living with disabilities for both print magazines and large online publications such as Elite Daily and has been a guest on podcasts such as The Queer Witch Podcast and The Now Age Podcast with Ruby Warrington. When not writing, she spends her days practicing divination and drinking rose lattes in the Victorian house she shares with her husband and their rescued pack of misfit dogs. You can find her on Instagram using her online handle @SpookyFatBabe.

Lisa Vannini is an Italian illustrator with a degree in Japanese Studies who decided that she was probably better off as an artist after getting lost on a sacred mountain in Kyoto for 6 hours. She’s worked as a concept artist in animation with Amazon and Jam Media, and as a freelance illustrator specializing in everything that is magical, mysterious, and out of the ordinary. In her spare time she enjoys watching Korean horror movies in her jungle-like house with her cat Moka and travelling to remote locations chasing after spooky folk-tales. When she’s stressed she buys another plant.