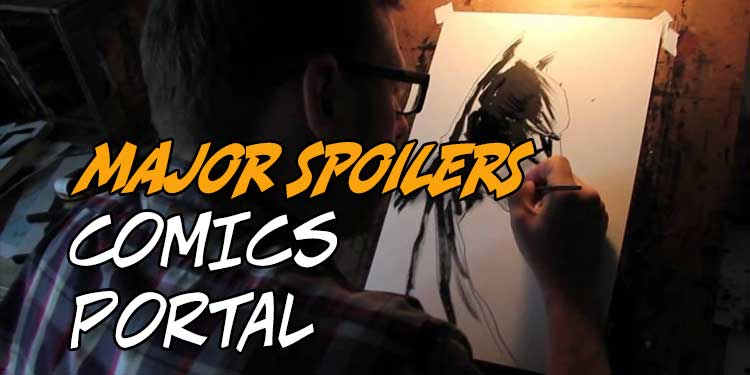 COMICS PORTAL: Jeff Lemire Has Found His Home at Image

As reported here at MajorSpoilers.com, accomplished creator Jeff Lemire has signed an exclusive contract with Image Comics, now his comics “home” for the foreseeable future.

WHO IS JEFF LEMIRE? My first encounter with this writer/artist took place at DC Comics in Animal Man. He changed this individual superhero into a family story, one I really enjoyed. It was one of the New 52’s initial successes. Then I came across Sweet Tooth, a then-Vertigo title that has been turned into a Netflix show. To this day, when I’m in the mood for a good cry, I read those last few pages in what was then the conclusion. It has since been followed up with another mini-series, but I still love that original ending, something rare in comics these days. He wrote several other books for DC, including Time Warp, Teen Titans: Earth One, and Justice League Dark, just to mention a few.

I did a little research and discovered a previous series from Lemire called Lost Dogs from Top Shelf Productions, which I purchased and dove into. They also published Underwater Welder and Essex County, other great stories!

Ever since then, I’ve been doing my very best to pick up everything Jeff has been writing.

It hasn’t always been easy, though. I’ve had to keep a watchful eye out for his books, which have come out through Marvel (All-New Hawkeye), Gallery 13 (Roughneck), Valiant (The Valiant, appropriately enough), Dark Horse (Black Hammer and Mazebook), TKO Studios (Sentient), comiXology Originals (Snow Angels), and Image (Family Tree, Plutona, Primordial, and AD: After Death). He also had a Substack story called Fishflies that I’m still discovering.

I haven’t listed them all, of course. I’m sure I’ve missed a few along the way, but I am always happy to find another story of his.

An interesting thing about Mr. Lemire is his art. Granted, he doesn’t always draw everything he writes, but there have been times when his artwork has perfectly matched the story. The aforementioned Sweet Tooth is an ideal example of that. Roughneck comes in close to that, in my opinion.

An important part of his writing has been his emphasis on drama rather than action. He’s one of the best scripters when it comes to this, with others having failed miserably along these lines. Since comics are a visual medium, if you have too many “talking heads” and grey blobs of text, a story can bog down and get pretty boring in a hurry. Not so with Mr. Lemire. I’m always fascinated when he explores personalities and how they interact. Great stuff!

WHAT DOES THIS EXCLUSIVE CONTRACT MEAN? Well, for me it means that I can now look at the Image Comics list of upcoming comics and be sure I’m staying better caught up on Mr. Lemire’s work. Phew!

I do worry, though, if this means the end of some of his other series’ like Black Hammer and Sweet Tooth. Can they be moved to Image or does the publisher have the rights to them? It will all depend on the individual agreements, I guess. Time will tell.

These days, authors like Mr. Lemire are doing more “creator-owned” storytelling, which I understand. It’s fun to play in someone else’s sandbox a lot of the time, but you want to stretch those “world-building” muscles of your own as well. Scott Snyder, another favorite of mine, has been doing a lot more of that in recent years as well.

Depending on his contract, Lemire might also enjoy other benefits to being “exclusive” with Image. Of course, not much of what this agreement entails has been revealed (and it’s better that way), but in the past, this kind of contract has opened the door to accessing healthcare coverage and other important personal benefits. Lemire is a smart guy, so I’m sure he’s got a lot of that worked out.

While Lemire is a popular creator, all this shopping around of properties takes time! What’s good is that this will reduce the amount of time and effort Jeff will have to spend trying to find the best organization to produce his stories and give him more time to actually create! That’s a great thing both for him and for us! I imagine he has had a LOT of people knocking on his electronic front door, asking if they would publish his wares. Still, it’s easier when you KNOW who is printing your books, I’m sure! Way back in those New 52 days, I had the privilege of talking with Mr. Lemire for my weekly podcast. I had a great time talking with him, asking about his emphasis on family and other things that made him stand out among comics creators.

A few years back, when he had left DC, I saw him talking with Matt Kindt in the Artist Alley aisles at a New York Comic Con. I couldn’t help myself since I’m a DC fan—I was curious to find out why he had moved on.

I briefly reminded them who I was, then asked my quick question—Why did you decide to leave DC?

Interestingly, they both gave me the same answer: “I wanted more freedom.”

Given that DC has many properties with restrictions you have to work within, I “got it” when they said that. If your storytelling has to live within the boundaries of what everyone else is doing or has done, that’s probably not nearly as much fun as telling your own tales.

All I can say is, Image had better treat Mr. Lemire well (and I’m sure they will). Otherwise, there is a long line of companies who very likely would be happy to welcome Jeff back into their folds again! Really!

What do you think? Are you also a fan of Jeff Lemire? Do you have a favorite book of his? Will you be buying more Image comics as a result of this? Whatever your opinions, be sure to share your thoughts below!