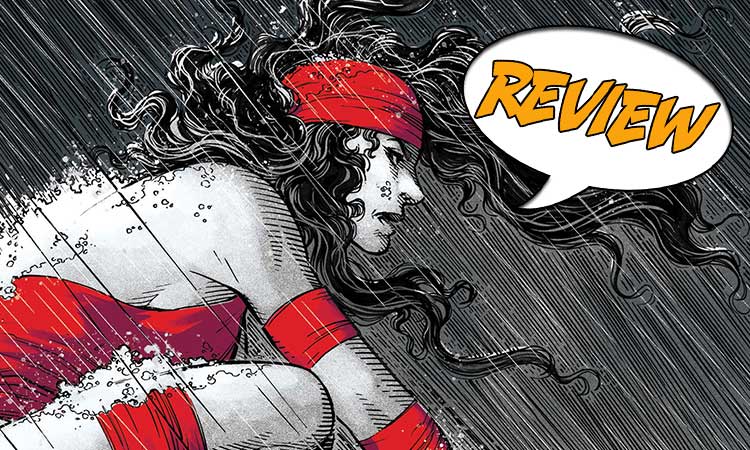 Previously in Elektra: Black, White, and Blood, Elektra has been many things: ninja, assassin, killer. These are some of her bloodiest and most harrowing battles.

Elektra: Black, White, and Blood #1 kicks off with a story called “Red Dawn” which finds  Elektra on the receiving end of a vampire attack.  After succumbing to the bites, she is offered a position in their brood which she violently declines.  After her encounter she goes home to see her daughter, before heading out to take control of her destiny.  The next story is called “Not The Devil” and it has Elektra chasing down a group of gangsters who have fallen on the bad side of The Kingpin.  She systematically cuts her way through the group before pausing when she sees her target’s sister.  Later on she returns to finish the job.  Finally the issue wraps up with a story called “The Crimson Path”, which sees Elektra in ancient Greece defending a young girl as she escapes from an army of masked soldiers as they try to kill her.

As with any anthology the quality between stories is going to vary, and it’s not different here in Elektra: Black, White, and Blood #1.  Conveniently though, they seemed to have organized them from worst to best.  “Red Dawn” is fine, but there really isn’t much there.  It’s very short and it’s also the one that feels the least like an Elektra story.  It has a nice poignant end but it could’ve been basically any character and have the same impact.  “Not The Devil” Is very action packed which is portrayed wonderfully.  It’s a little light on actual story but it makes up for it by being just fun and full of great panels. “The Crimson Path” is the best part of this collection.  It’s poetic and surreal and it manages to do a lot with just a few pages and some well utilized narration boxes.  As a whole it’s a fine collection of stories, while none of them are very involved, they are creative and it was nice to see the creators get imaginative with their depictions and interpretations of the character.

These monochromatic collections have continued to grow in popularity over the years and while they all have similar looks, the way they utilize the color scheme varies wildly in quality.  Here though, the artists really had a great handle on it, especially in “The Crimson Path”.  The way they utilized the blood as a way to transform Elektra’s ancient Grecian look into her iconic look was really slick.  Other moments that deserve mention include how Elektra sees people after being bit in “Red Dawn” and the blood splatter over the newspaper in “Not The Devil”.

Elektra: Black, White, and Blood #1 isn’t going to blow anyone away, but it should at least entertain.  With the stories being more like snapshots rather than fully realized stories, it’s like taking three trips to the sampler booth at the store rather than picking up a full dinner.  There are some clever usage of the monochromatic color scheme to enjoy as well as some clever writing nonetheless.  3.5 out of 5 Stars.

Elektra: Black, White, and Blood #1 is filled with three stories who each could’ve done with at least one or two more pages each. Nonetheless there’s some fun to be had reading this as well as some nice art.