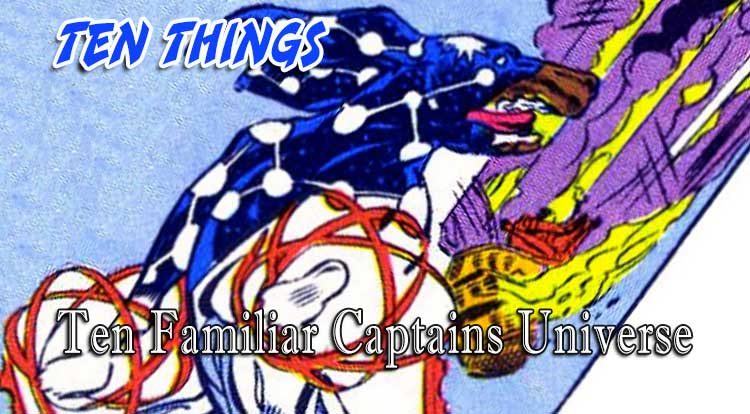 The Uni-Power travels all over the Marvel Universe, empowering random individuals at will.  On occasion, it stands to reason that the host will be someone we already know.  Welcome to Ten Things: Ten Familiar Captains Universe!

Whooshman-Bicarbonate Films, in conjunction with An Amateur Comics Historian and the Uni-Power, Presents: Chosen by the Engima Force (a mysterious entity that puts the “power” in Uni-Power) to repair damage to the Earth’s tectonic plates, William Nguyen decided instead to use his power to attack The Juggernaut, whom he blamed for the loss of his livelihood.  When he admitted that he had no intention of repairing the fault lines, Nguyen lost the Uni-Power, which then migrated… to Juggernaut!  With his limitless physical power enhanced by limitless cosmic power, Cain Marko repaired the fractures in the planet’s crust, earning a commendation from the Uni-Power and a bit of respect from Spider-Man.

And speaking of Spider-Man? During the interdimensional battle against Morlun and The Inheritors, Spider-Man Miles Morales watched the Spider-Man of Earth-13 (a Peter Parker who never gave up the Enigma power) killed.  The Spider-Army then used the traces of his power to summon Captain Universe, who wasn’t interested in being told what to do.  Faced with the destruction of all there is, Miles stood up to the cosmic being, impressing it enough that he was given the power of Captain Universe, turning the tide of Spider-Geddon once and for all.

Captain Universe-Spider-Men are, after all, a tradition. In the reality known as Earth-9997, Mar-Vell of the Kree died similarly to his demise on Earth-616, ending up in a strange Realm of the Dead.  In this reality, the Microverse (where the Enigma Force originated) was later destroyed, which somehow sent Captain Universe to that same nether-realm.  Bonding with the Uni-Power, the late Captain Marvel became a new Captain Universe, and set off on a multi-miniseries posthumous adventure that, I’ll be honest, I never understood.

When last seen, he had set off to explore the multiverse.

Originally a stand-in for Superboy in the Imperial Guard, a pastiche of the Legion of Super-Heroes set in Marvel continuity, Kallark of Strontia’s incredible might earned him leadership of the Guard.  An “Ours Is Not To Reason Why” sort of alien, Gladiator followed orders to find and capture the Uni-Power, attacking it’s current wielder (whom we’ll get to in a moment) in the hopes of adding its might to the Shi’Ar Empire.  After a little of the ol’ fighty-fighty, the incumbent Captain commanded the Uni-Power to bond with Kallark, allowing him to see the truth of the matter and declare an awkward truce.

I wish they’d done a more traditional take on the costume, rather than the boring starfield. One of the few beings to be granted the power of Captain Universe more than once, Laura Kinney (known as X-23 at the time, or Wolverine now) was initially chosen so that the Uni-Power could assimilate some of her healing factor.  Some time later, she was pulled into another dimension to help battle the king of the Whirldemons, sealing him away with the full force of her abilities.  That encounter ended with the Enigma Force informing Laura that she was somehow the heir to its entire cosmic might, which… I’m not sure what that means, but I don’t think anyone has followed up on that. Targeted by Thanos the Mad Titan because of the purple guy’s belief that Lady Death, his crush, had a thing for him, Deadpool was dragged into cosmic nonsense against his better judgement.  When he and Thanos were forced to attack Eternity to save Death, the Uni-Power intervened to avoid the end of all reality.  Dubbing himself Pool Captain, Wade Wilson single-handedly ended the conflict, returning Death to her role and ending her secret plan to destroy the universe. Remember that bit about how Captain Universe had to assimilate X-23’s powers?  She wasn’t the only one, as the Uni-Power also bonded with The Incredible Hulk for a time, then moved on to one Matthew Murdock, Esquire.  Rather than powers or healing factors, this time, Captain Universe needed legal knowledge, in order to free a man who was blamed for a murder he did not commit.  Daredevil’s time as Captain Universe came with a return of his sight and massive upgrades to his other enhanced senses, making Matt Murdock one of the few to reject the power outright due to sensory overload.

Remember that the next time somebody tells you they like Daredevil’s down-to-Earth, street-level realism. If you thought that a Uni-Powered Juggernaut was over-the-top, then you’re gonna love this one.  Faced with continuing power issues and memory loss, even after absorbing the powers of X-23, et al, the Enigma Force needed to find a power source more in its weight class.  By bonding with Norrin Radd, The Silver Surfer, the Uni-Power was infused with his Power Cosmic, which helped to undo some of the damage to its being, and even protect against future attacks.  Norrin was able to bring the power safely back to Earth, where it took a new host and made its way into the Microverse in search of a final cure. In the doomed reality of Earth-9151, the serpent god Set was successful in his plot to take over the Earth, killing the heroes of the world.  Combining his Quantum Bands with the power of the Eye of Agamotto, then the Uni-Power itself to defeat Set once and for all, the Avenger Quasar became a Captain Universe to battle the snake one-on-one.  Though he was successful in trapping the elder god in the Eye, the Seven Brides (The Invisible Woman, Marvel Girl, Andromeda, She-Hulk, Storm, Dagger and the Scarlet Witch) gave birth to Set’s children, who ate first them, then most of the population of Earth.  Those that weren’t food end up as mindless drones of Set’s children, and everything you know and love died. Back in Gladiator’s entry, I mentioned a Captain Universe who fought him to a standstill.  That Captain was Susan Storm, the Invisible Woman of the Fantastic Four, who was working with her husband to examine the Uni-Power and heal its cosmic injuries.  Once again, she didn’t take on the full costume and cowl (which is a bummer) but she was instrumental in stopping Gladiator’s attack and getting the Uni-Power into space where The Silver Surfer could heal it.  She also turned down a second offer of phenomenal cosmic power, something that not every hero could claim.

Once again, this week’s topic, Ten Familiar Captains Universe is all me, but feel free to follow along @MightyKingCobra to suggest your own!  There’s always more Ten Things madness on my Twitter or check out the full Twitter archive here!  As with any set of like items, these aren’t meant to be hard and fast or absolutely complete, if only because Captain Universe is the hero who can be anyone… even YOU!  Either way, the comments section is below for just such an emergency, but, as always: Please, no wagering!