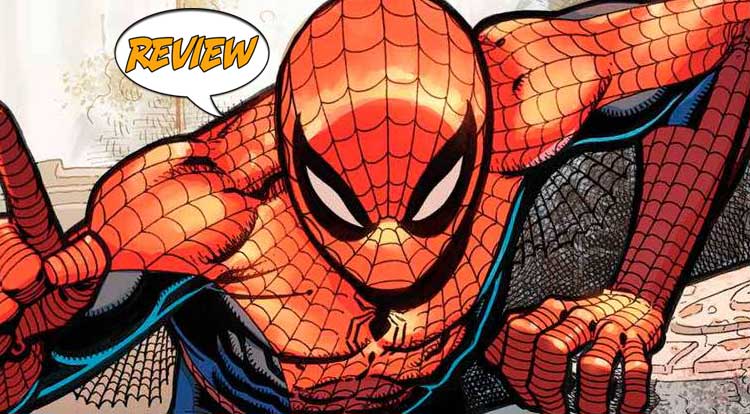 Peter’s out of his coma, but about to take a beating that might put him back in the ICU.  Your Major Spoilers review of Amazing Spider-Man #83 from Marvel Comics awaits!

Previously in Amazing Spider-Man:  Once again in the red-and-blue suit, Ben Reilly has been working hard to prove that he’s as much Spider-Man as his “brother”, Peter.  As for Peter Parker, he’s facing what seem like unbeatable odds as his powers have gone haywire…  Can The Amazing Spider-Man get back in the game or has the ship sailed on the first Spidey’s career?

HIS POWERS TURNED AGAINST HIM

Amazing Spider-Man #83 starts with a brief interlude featuring Spider-Man’s girlfriend, Janine, scanning the media reports about Ben’s activities and adventures in New York City.  That’s good, because the rest of the issue focuses on Peter Parker, facing physical therapy without his usual aplomb.  In his pain-med-induced stupor, he even bought a battle-damaged Spider-Man costume off the internet, but as he considers whether to don it, his spider-sense goes ballistic.  Ever since the battle with the U-Foes, it’s been overclocking, and the sheer agony forces him to devote all his energies to fighting off the “attacks.”  We then cut to a puzzling sequence wherein he leaves the hospital to seek out crime, wearing his newly purchased costume, and what seem to be bootleg web-shooters.  Things go very badly, and only the interference of Captain America keeps him from dying,  He takes a shield to the head, then hallucinates a conversation with his aunt and uncle during a bout with the flu when he was twelve, then confronting the Web-Head in his head.

The visualization of his battle with his own powers is confusing to me, as Gleason shows it as a physical battle in an imaginary New York, then transitions to the equally ludicrous idea that he just snuck out of the hospital to have a fight. Is the whole issue a hallucination?  I’m not entirely sure.  The last page doesn’t exactly answer the question, but Peter’s physical condition in the drawing might?  I can’t be certain, and I’ve read the issue four times.  The art is not bad (as long as you can deal with Gleason’s exaggerated anatomy and Spidey’s swollen head and HUGE mask eyes), but throughout the issue, it feels like there’s something that doesn’t quite click.  There’s a lovely two-page splash with imaginary Spider-Man leaping into action, but on the whole, the issue’s storytelling seems focused on tight shots without much in the way of transitional material, exacerbating the ongoing problem of “Is this even real?”

Even with those complaints, Amazing Spider-Man #83 serves as a satisfying single chapter of comics, ending with a continuation that doesn’t feel like a cliffhanger so much as a decent close, with art that never falls beneath the threshold of pretty okay, earning 3 out of 5 stars overall.  It’s an issue that wrestles with the well-covered topic of power loss/malfunction in an interesting way, which helps to overcome some of the lack of storytelling clarity.

Some unclear transitions give the whole issue a hallucinatory quality, but only part of it is a dream, while Gleason's art does the job, but doesn't dazzle. It's a pretty okay issue with some interesting ramifications.