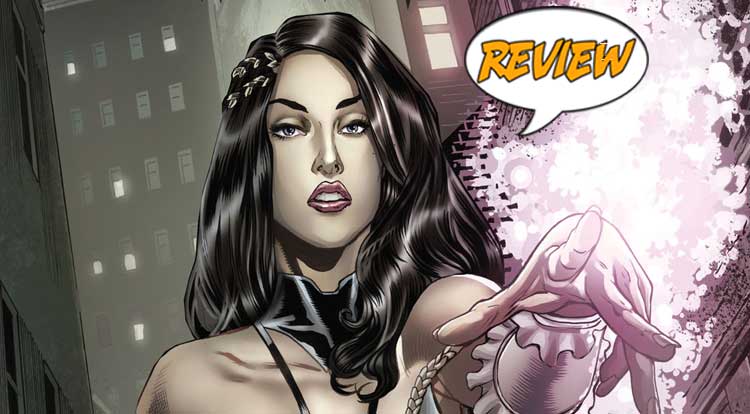 Skye and her allies are scattered across the Fairy Tale realms, but they have to find their way home to battle The Dark Princess.  Your Major Spoilers review of Grimm Fairy Tales #55 from Zenescope Entertainment awaits!

Previously in Grimm Fairy Tales:  After sparking a full-blown revolution, Skye was lucky enough to escape with her life. But how she ended up here (and where, exactly, “here” is) is a question unto itself.  Surviving betrayals on a cyber-enhanced world is one thing, but can she make her way through the underbelly of her new surroundings?  And what dark secrets lie ahead for the Guardian of the Nexus?

In a strange noir-inspired reality, Skye (Guardian of The Nexus) and Julia (The Queen of Hearts) find themselves at a bit of a loss, facing their one-time ally, Belle.  Except, she’s not exactly Belle, she’s a masked detective, and their standoff is interrupted by the Three Musketeers, or at least their serpent-empowered counterparts.  Back in their home reality, witch Samantha Darrin and Skye’s mentor, Shang, have to make their way from Wonderland to Neverland for mysterious reasons, all while the Dark Princess watches from her palace.  As the issue ends, Skye, Belle, and Julia are trapped by the Three Serpenteers, with Belle’s friend Mel gravely wounded by their gunfire.

ALL BOUND UP IN A WHIRL

It’s been a little bit since I checked in on the Grimm Universe, but I didn’t expect to be THIS lost.  The “multiverse” premise of the story is in fashion (see the last two Spider-Man movies, the CW, the Marvel Cinematic Universe, and pretty much anything else) but the Grimm Fairy Tales took place across multiple realities already.  The expectation, then, is that we’re looking at a multiverse of multiverses, which is very confusing.  So, I’m not sure whether the Musketeers and Belle seen here are the “real” ones or alternate versions, even having checked out the previous couple of issues during the reading of GFT #55.

The art of Babisu Kourtis isn’t bad in these pages, just a little indistinct, making it hard to tell who is who after the characters change clothes in their new universe.  It’s almost not a sketchiness so much as a blurriness to the wide shots, making me wonder about the resolution of the original images.  The final panel of the issue has three very awkwardly positioned characters arrayed around a well-done Belle figure, but it’s a tough way to end the issue.

Between the art’s inconsistency and the concatenations of story, Grimm Fairy Tales #55 is not the place I should have chosen to jump back in, and even after reviewing the events since issue fifty didn’t give me a better view, earning a straight-down-the-middle 2.5 out of 5 stars overall.  Certainly, long-time GFT fans will get more out of it than a new reader, but even with that additional context, I feel like the execution of the script and art wouldn’t necessarily push this book’s rating much higher.

The use of familiar tropes helps to clarify what's happening in these pages, but there are still a lot of moving parts and the art is oddly inconsistent. If you've been around for a while, it likely makes more sense.