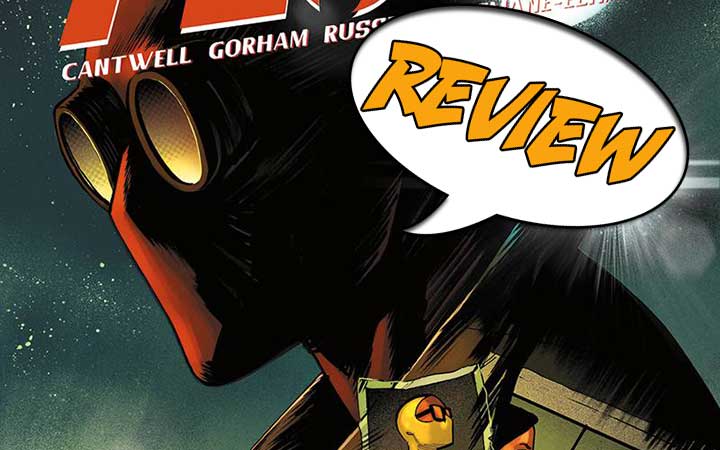 With humanity on trial, the Blue Flame uses his vigilante friends as examples of people at their finest. But does he know the whole truth behind these friends he worked with? Find out in The Blue Flame #6 from Vault Comics!

Previously in The Blue Flame: Sam Brausam, the cosmic hero Blue Flame, is on trial defending the humanity of Earth. But back on Earth, after the attack that killed his friends and left him physically wounded and suffering from PTSD, he struggles to make sense of his life and help his pregnant sister. He turns to a support group for help and shares his secret with the journalist he has been dating.

The Blue Flame #6 opens as a father kidnaps his son. He doesn’t realize that the Night Brigade are watching him, and we soon realize that this is in the past. They work together efficiently as a team. Swiftbird tracks him from on high. Theia disrupts his radio and tries talking to him, to no avail. The Feat leaps on his car and stops him. The Blue Flame manages to grab the child as the Crimson Visage talks to the man. He claims he would never hurt his son, but the Crimson Visage is not shy about pointing out that putting him through a kidnapping and subsequent chase did hurt him. Then we see that Madison, the journalist, is reading this as an old article. And she is writing about the Blue Flame.

Meanwhile, humanity is on trial. The Blue Flame explains that Swiftbird, Theia, and the Feat were heroes. The opposing Council objects, as these are clearly idealizations and not the individuals. Sam uses the recording composites of their personalities to ask each of them why they were heroes. Their answers are all idealistic, along the lines of being driven to make a difference.

Madison’s writing is interrupted when Sam calls her, asking for help on behalf of his sister. Her boyfriend, Mateo, is missing. With a little bit of questioning, Madison learns that Mateo was born in Guatemala, but his parents brought him to Milwaukee when he was two. He is probably undocumented. There is a knock on the door. Sam answers and an old man, Ogima Ford, introduces himself as the father of Beshkno, the Crimson Visage.

Back at the trial, Yarix, the opposing Counsel, has done his research. The three heroes, Bud, Heather, and Zola in their normal lives, all had problematic pasts. This is the sophisticated dilemma we meet frequently. Are people’s pasts irrevocably part of them, or can they grow beyond them? And if they can grow beyond them, will others recognize it, or are they doomed by memories of the past?

The Crimson Visage was not mentioned at the trial. Sam talks to his father, who had not seen him in years and who asks what kind of person he was. Sam remembers him as being kind and smart, a natural leader, a hero. Yarix knows more. Beshkno ran away from his home reservation at thirteen, and his family had no interest in looking for him. He resurfaced a few years later after joining a right-wing militia. A year later, their headquarters were bombed and four men were killed. Beshkno Ford was not among them. Was he really the good man Sam remembers?

FROM HEROIC TO HUMAN

The art of The Blue Flame #6 does something interesting. We see members of the Night Brigade from several different perspectives. As Sam remembers them, they are classically heroic. But in the opening scene, we see them at work. They do work as a team, and they are rescuing a child, but in this world, being a vigilante is messy work. People and their motivations are complicated. The father claims to have affection for his son yet yells at him to shut up as the fearful child cries for his mother. Getting him to stop, the Feat damages his car. Without realizing it, the Night Brigade has raised the stakes and the trapped man draws a gun. This is dangerous work, especially for the child.

Already we sense that Sam’s take on their heroism may be overly optimistic. Through Yarix, we see his friends are all too human and had their own problems. This is echoed in Sam’s own harsh reality. It has been months since the attack, but he is not invulnerable. He lives, but his recovery is slow. He may appear whole at the trial, but the realities he learns there start to break him down, paralleling his PTSD back on Earth. Sam still wants to believe the best of people, but the art shows us his weariness and struggle to do so.

The Blue Flame #6 is such a fascinating take on heroes. Is it enough to have good intentions, or do the consequences matter? And when is having secrets from your teammates become a serious problem?

The Blue Flame fights to save humanity even as Sam struggles to survive and to help his sister.