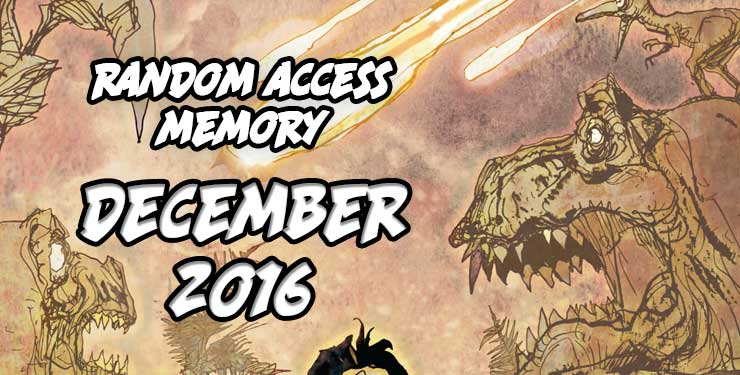 Rand Bellavia takes a look at his growing longbox, and reflects on comics released in December 2016.

The Flintstones 6: The End of the World as We Know It I’m been a Mark Russell fan since I read God is Disappointed in You, his snarky 2013 adaptation of the Bible.  His comics work has been uniformly excellent, starting with this remarkable Flintstones series, which uses Bedrock as a metaphor for America (and society in general). This presumption that citizens of Bedrock are better than other people will, of course, be put to the test.  But first, bowling! Later that night, Bedrock gets some bad news. The Church has little comfort to offer. Faced with their imminent demise, society turns out to be a lot less kind and decent than the anonymous pundit claimed. They seek out Professor Sargon, but the Science Cave is about as helpful as the Church of Gerald. The answer is yes.  Yes, it is possible that he was wrong. Having narrowly survived complete destruction things get back to normal. Five year later this surely feels like a metaphor for something, but the message of the story seems to be that we’re incapable of learning the important lessons.  So it goes. One of the unintended consequences of the “auteur” phenomenon in late 90s comics is that many of the new characters created by the Big Names were often treated as if they were off limits.  This started with Frank Miller’s Elektra and was solidified with Neil Gaiman’s Sandman characters, but it seemed a real shame that all of the cool characters created by Grant Morrison and Garth Ennis (that were clearly meant to be released into the greater DC universe for others to play with) were left alone.

Steve Orlando appears to agree, as this series goes out of its way to play with elements from those very comics.

We open with this image of Neron (created by Mark Waid and Howard Porter in 1995).

Note the similarity between those panels and the cover to Grant Morrison and Howard Porter’s JLA 6 (also featuring Neron): Midnighter then encounters the Arkannone. This trio of demons was first (and last) seen in Garth Ennis and John McCrea’s Hitman comic:

They reference the Ace of Winchesters, also created by Ennis and McCrea in Hitman.

Later Midnighter and Apollo face off against the Mawzir: The Mawzir also first (and last) appeared in Hitman, and I think we can all agree that McCrea character design is worthy of more frequent appearances. by Art Baltazar and Franco This mini-series is the best kind of crazy. …quick-paced and fun and completely unhinged, yet entirely appropriate for children.

In November of 2016 my band Ookla the Mok were the music Guests of Honor at Windycon.  Art Baltazar was the artist GoH.  One of my favorite memories of the weekend was listening to Art describe this series to us.  I’m pretty sure he actually said the words “He is the composite Superman.  He’s from the future.”

And it just gets crazier with each page. I’ve always been a sucker for verbs as action sound effects.

And it turns out the composite Superman wasn’t looking for Superman after all. So we shift scenes for even more glorious weirdness, where it looks like Superman’s going to be a big brother: Other Comics I Read from December 2016