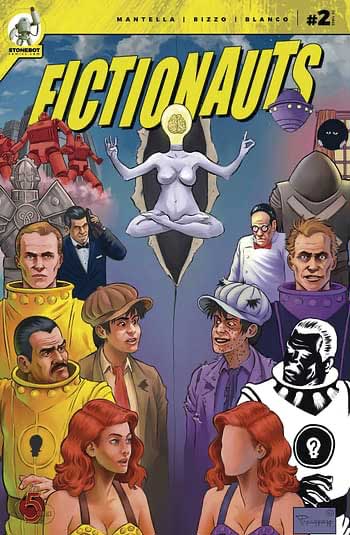 LEAD CITY #1
JAN221614
(W) Eric Borden (A) Kyle Brummond
It’s 1873 when a blizzard strands Homesteader Colman Cooper and his family in a small town. He soon learns the town plays host to an annual contest that attracts thieves and killers from far and wide. With no way out Colman finds himself pitted against seven deadly fighters in the anything goes, tooth-and-nail battle for survival known as Lead City. Before Deadwood. Before Tombstone. Before Durango. There was Lead City.
FC · 32 pages · $3.95
Available March 30, 2022 FICTIONAUTS #2
JAN221615
(W) Mauro Mantella (A) Leandro Rizzo (CA) Alvaro Papagiani
Recently, a rash of unexplained disturbances across the fictional universe has started to tear it apart, and the heroes of Hypercity face the ultimate challenge when the mysterious Agent X threatens to bring down the barriers between our world and the world of stories! Dive headlong into the madcap, mind-bending world of the Fictionauts!
FC · 32 pages · $3.95
Available March 16, 2022 DOWNLOAD #4
JAN221613
(W) Scott Chitwood (A) Danny Luckert
In the grand finale of the series, Eric and his friends finally discover the origin and purpose of the Download. However, it may be too late for the kids as they must face off against the original threat the devices were designed to do battle against.
FC · 32 pages · $3.95
Available March 9, 2022 CARRIERS #5 – Cover A
JAN221611
(W) Johnny Arnold (A) Jason Kemble (CA) Federico Guillen
The Giant Sized finale! An alien race enters New York City ready to assimilate with Earth’s technology. Only the Carriers have the ability to discover the truth behind these technological marvels and stop them before it’s too late.
FC · 32 page · $3.95
Available March 2, 2022 CARRIERS #5 – Cover B
JAN221612
(W) Johnny Arnold (A) Jason Kemble (CA) Shelby Robertson
The Giant Sized finale! An alien race enters New York City ready to assimilate with Earth’s technology. Only the Carriers have the ability to discover the truth behind these technological marvels and stop them before it’s too late.
FC · 32 page · $3.95
Available March 2, 2022 MEGA VOL. 1
JAN221616
(W) Salvador Sanz (A/CA) Salvador Sanz
A gigantic creature has been awaken from its eternal sleep in Antarctica. The destructive monster, only known as “The Salamander”, has started a journey of chaos and destruction. The only thing that could stop this menace is another sleeping giant; a creature from under the ocean known as “Mega”.
FC · 108 page · $19.95
Available March 23, 2022 RAISE UP THE DEAD: A ZOMBIE COMICS ANTHOLOGY
JAN221617
(W) Agustin Alessio, Eduardo Risso, Luciano Saracino (A) Diego Agrimbau, Max Fiumara (CA) Agustin Alessio, Eduardo Risso
In the world of the living dead you have two options… become food or become a zombie!? A group of talented comic authors come together in this volume to tell the scariest stories of the impending Apocaly?pse. We hope it will be useful as a guide for what is to come…
FC · 108 page · $17.95
Available March 30, 2022