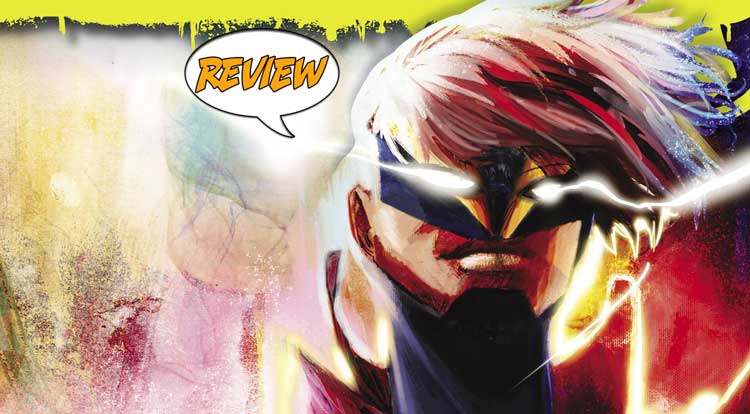 One of the most notorious psiots of them all, Pete Stanchek has resurfaced in Chicago, and chaos has bloomed in his wake.  Your Major Spoilers review of The Harbinger #3 from Valiant Entertainment awaits!

Previously in The Harbinger:  A daring rescue mission unravels the mystery of Peter Stanchek’s past…  and paves the way for the powerful psiot’s future.

After a humiliating defeat at the hands of a dubious super-team called The Warning, Pete Stanchek has decided to change his tactics.  With the help of his friends, Cici, Stanchek dons a superhero costume and a mask, taking to the skies to find his friend Young Ago.  Focusing his power, he tracks the would-be heroes (who refer to each other exclusively by their noms de guerre, which is infuriating after a page or two) and smashes his way into their lair, declaring himself The Harbinger of the world to come.  He overpowers the whole team one at a time before confronting Lethean, who stole his memories.  She swears that all she has done is block them, but he rips the H.A.R.D. Corps tech from her brain, then depowers her friends one-by-one.  As he flies away, he knows that he’s made things worse for himself and the other psiots of Chicago, but has chosen to “stand for truth.”

This issue is colorful and fast-paced, and it ends with a somewhat surprising return/debut and, for the most part, does its job well.  The stylized pencils of Robbi Rodriguez make for an interesting battle sequence that is still somehow grounded in reality, even with telekinesis and capes.  His angular faces and body proportions are unique, but they also make for some issues in storytelling clarity.  The designs of The Warning are cool, but it’s sometimes hard to tell who is who from panel to panel and page to page.  The story has a similar issue for me as a reader, as our narrative device is a conversation between Peter and someone who isn’t revealed until the end, which makes for a difficult start, as I had to go back-and-forth a couple of times to unravel the story.  The lopsided fight is more entertaining than it feels like it should be, as the real obstacles aren’t the powers of the “bad guys,” but the consequences of Peter’s own actions… and not all of those decisions are recent ones.

All in all, The Harbinger #3 is an interesting issue that covers a lot of territory fast, which makes for a frenetic read that hits some strong beats, and even if I’m not entirely sure that it did everything it wanted to, it made for a better-than-average issue overall, earning 3 out of 5 stars overall.  As someone who remembers the first Harbinger series, this one seems like an entertaining take on the concept, and I’m gonna look out for the next issue.

It's nice to see some of the old- school Valiant ethos of realistic stories, even with wild-and-crazy powers, but slightly clearer art and plotting could have made this even more successful.