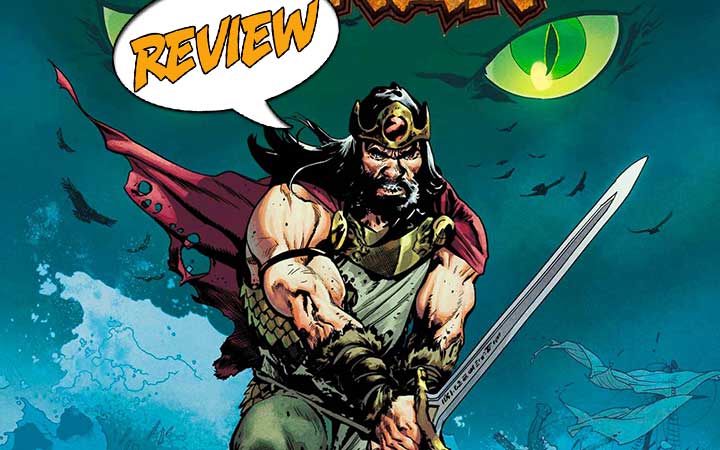 In 1932, Weird Tales released “The Phoenix on the Sword” by Robert E. Howard, the first Conan tale that not only featured Conan as the ruler of Aquilonia, but also Conan’s rival, Thoth-Amon. Only in the original books, Conan and Thoth-Amon never met face-to-face. That all changes in King Conan #1 from Marvel Comics!

Previously in King Conan: He’s been a barbarian, a thief, a pirate, and a king, but Conan, the Cimmerian, black-haired, sullen-eyed, sword in hand has grown restless, and has wandered west from the Hyborian continent…

ARNOLD HAD IT RIGHT

If your only connection with Conan is the Arnold Schwarzenegger movies, you’ll be happy to learn that it feels like some of that energy is being channeled in King Conan #1. From Conan punching a vulture in the head, to providing snark while battling his greatest enemy, Jason Aaron has captured what the general public thinks they know about Conan, and presents it in a way that instantly draws you in. Each panel feels important, and gives the impression that if you skip any part of the page, you’re going to miss something vital.

Stranded on a desert island, King Conan #1 is part “Lost” and part “Castaway,” with a little pinch of “Evil Dead” thrown in, as the title character not only comes face-to-face with Thoth-Amon (an evil wizard who plans to kill the king to power his necromancy), but also a mishmash of other creatures Conan has faced in his previous adventures. While there are a lot of questions that seem to go unanswered regarding the island itself, most of this first issue is dedicated to a giant fight sequence between Conan and Thoth-Amon. And what a fight it is! Swords, daggers, snakes, snake daggers, and even an exploding shark make the battle feel epic, like the last act of a major motion picture. Only, this is the first act, and there is a lot of story still to come. That alone has me ready to come back for more.

The Conan property has been passed around from one comic publisher to another since the 1970s, and even though there have been numerous writers that have taken on Conan, the ones that work best – for me at least – are those that can channel Robert E. Howard, and make the world of Hyboria feel real and complete. While I agree that a writer’s voice should be unique, when I read Conan tales by Roy Thomas, J.M DeMatteis, and Kurt Busiek they feel like they are coming from a single source. Jason Aaron appears to have tapped into that spirit in this first issue, as he draws inspiration from Howard’s notes regarding Conan stories that were never written. The results are nothing less than impressive.

I like a well choreographed fight sequence, and Mahmud Asrar delivers in page after page of knock-down-drag-out action. At no point is the reader lost; always knowing who is swinging a sword, who is throwing a dagger, or… missing a hand. There is one moment where the action appears to be hidden from the reader, but the next panel shows us why, ultimately throwing a wrench in Thoth-Amon’s plans.

Asrar favors four and five panels per pages, but there is a flashback sequence that is told through a series of full-page panels. While one can can argue that single and double page spreads seem wasteful in a  time when comic prices continue to climb, I like the break in the action with this sequence. The full-page spreads in King Conan #1 give the reader a chance to breathe, while also providing necessary history on the character, and how he became a king for those coming in new to the property.

Though the layouts and character renderings look great, I am not a fan of the coloring. Here, Asrar and Wilson do a good job with a limited palette of mostly blues, greens, reds, and purple highlights, however, it is the high contrast, heavy blacks that are used in the shadows that are off-putting. I used to call this “The Dynamite House Style,” but that has since broken free and found its way to other publishers. The fact that Asrar has done work at Dynamite is not lost on me, by the way. The coloring does feel moody, and it does feel right, it presents a sense of impending doom that plays out at the end of the issue, but it doesn’t make this book feel like a Marvel book.

Small nit-picks with art aside, King Conan #1 hit all the right chords with me. From the first page, this feels like a story Robert E. Howard would approve of, and it feels like it fits with what has come before. If Conan in the modern Marvel Universe is not to your liking, King Conan #1 takes us back to basics; a warrior looking for adventure, and encountering all sorts of craziness in maggot-infested waters, earning 4 out of 5 Stars from this reviewer.

High adventure! Evil sorcerers! Vultures that get a punch in the face! What isn’t to love? If you are a Conan fan, pick up King Conan #1.