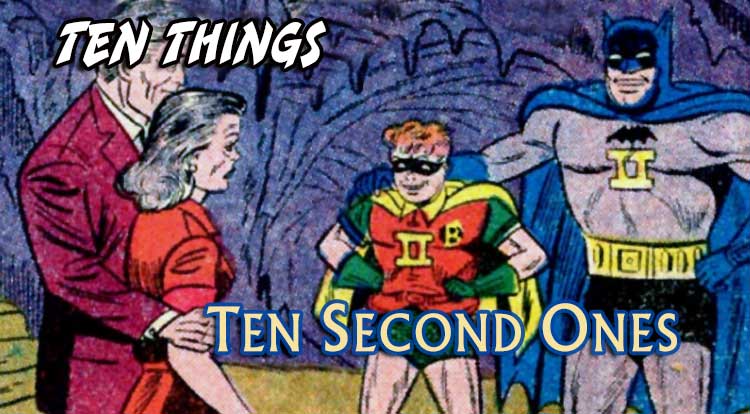 After so many comics and so many super-hero stories, there are a lot of legacies about, and not everybody can be the first one to use their name. Welcome to Ten Things: Ten Second Ones! When a plane crash seemingly killed Batwoman Kate Kane, Ryan Wilder was first on the scene, looking to help any possible survivors. Instead, she found Batwoman’s specially armed and armored costume and took it for herself. Ryan put on the costume to get revenge on Alice, Batwoman’s most implacable foe, who was responsible for the death of Ryan’s mother several years earlier. This brought her into the network of the hero’s previous allies, who eventually accepted her as the new Batwoman. Remarkably, Ryan has remained in the bat-suit even after Kate’s startling return, which can be an impressive feat for someone seen as a “replacement.” The first Sphinx was an extradimensional being who eventually returned home to his own reality. Before leaving, though, he gifted his massive fortune and business holdings to his partner Allison Kane, including the helmet of power and a scaled-down version of his superhero costume. Allison is a smart, capable woman, but finds that the Sphinx left some big shoes to fill. (Literally, he’s like seven feet tall.) Though I came to know both heroes through the pages of Big Bang Comics, they actually predate those adventures. A human child genetically altered to withstand the conditions on Jupiter, Glomb (who was never given any other name) was a bear of rather little brain. Due to his incredible power and limited intellect, he was imprisoned at Project Misfit, a military base/prison for dangerous creatures. With fellow captives Shag and Mystra, Glomb escaped the facility and formed a super-team known as The Misfits to defend the Earth from any and all threats.

He is identical to an earlier, visually identical character of the same name from a 1967 cartoon pitch, who later appeared in comics form as part a spacefaring super-team called The Rejects. The two Glombs share a creator, Wally Wood, but otherwise can’t be the same character. A member of the Global Guardians in the New 52 DC Universe, real name unrevealed, she wears the Golden Fleece of myth and legend, allowing her to channel the abilities of any of the Argonauts who accompanied Jason of Iolcus in his journeys. Since those sailors included Heracles, Atalanta, and other superhumans, she’s mighty dangerous in battle. The fate of the previous Olympian, Aristides Demetrios, is as yet unrevealed. A loner who doesn’t trust her fellow superhumans, America Vasquez is not only super-strong, fast, and agile, but able to travel between dimensions as well. Created by Joe Casey, she is nearly identical to the earliest appearances of America Chavez, a character he created for Marvel Comics a few years earlier. Casey insists that he doesn’t know what readers are talking about there, but it’s clear that the America of All-America Comics specifically refutes certain aspects later added to the America of Young Avengers and other Marvel books, and effectively works as a second chance for Casey to do the stories he wants.

The death of Guardian, leader of Alpha Flight, was not only devastating to his team, but to his wife Heather McNeil Hudson. At first reluctant to take on his role as superhero, she eventually donned a version of his power-suit and became the superhero Vindicator, one of his previous aliases. Once she grew into the role of leader, she became Guardian again, later giving the name up when her husband was resurrected. They have since traded back and forth their aliases, but Heather is nonetheless the second one of BOTH Alpha Flight members. At any given point, she may or may not be dead. Flip a coin. Wearing a harness that not only gives him super-strength and the ability to grow to massive size, but a sense of purpose and heroic drive, James Jensen took up the role of Giant from his father-in-law, the Golden Age Giant. A member of The Champions, Giant eventually retired from the superhero biz, only to return for one last battle, perishing in combat with the forces of DEMON, whose leader used an equally powerful ancient artifact. The role of Giant was picked up by James’ daughter Billie, now known as The Sensational G-Girl, with the “G” honoring her father and grandfather’s roles as Giant. On the world designated Earth-3839, the Golden Age Green Lantern stayed active for several decades before eventually turning his ring over to successor Kyle Rayner. As the second Green Lantern in a world where the space police for some reasons didn’t show up, Kyle serves ably until he is attacked by Sinestro, forcing United States President Hal Jordan to take over the role.

Because all roads at DC lead to Hal and Barry, whether it makes any story sense or not. On Earth-1048, the reality of Marvel’s Spider-Man, Miles Morales was bitten by a genetically-altered spider created by Mayor Norman Osborn. After the Devil’s Breath incident rocked Manhattan, Miles became a second Spider-Man, assisting Peter Parker in his duties as protector of New York City, including an somewhat ill-fitting costume of his own. Miles took over as main Spidey while Peter was out of the country, eventually developing his own unique look and a few powers that Peter did not have, with his bravery and cleverness eventually proving to the public that he was more than a junior sidekick. The death of the first* Flash during the Crisis on Infinite Earths was shocking to the world, but few took the loss harder than his partner and nephew Wally West. Taking up his mentor’s role was emotionally fraught, and it took a move to Keystone City for him to fully accept himself as The Flash. After a near-death experience at the hands of Vandal Savage, Wally was finally willing to make some alterations to his uncle’s iconic costume, including a new belt design, lenses in his mask for eye protection and a slightly bulkier profile. (The new look was clearly inspired by the CBS TV show, which was ironically cancelled just weeks after the first appearance of Wally’s new comic suit.)

Once again, this week’s topic, Ten Second Ones, is all me, but feel free to follow along @MightyKingCobra to suggest your own topics! There’s always more Ten Things madness on my Twitter or check out the full Twitter archive here! As with any set of like items, these aren’t meant to be hard and fast or absolutely complete, if only because even that guy created last week probably already has an Earth-2 Golden Age counterpart. Either way, the comments section is below for just such an emergency, but, as always: Please, no wagering!