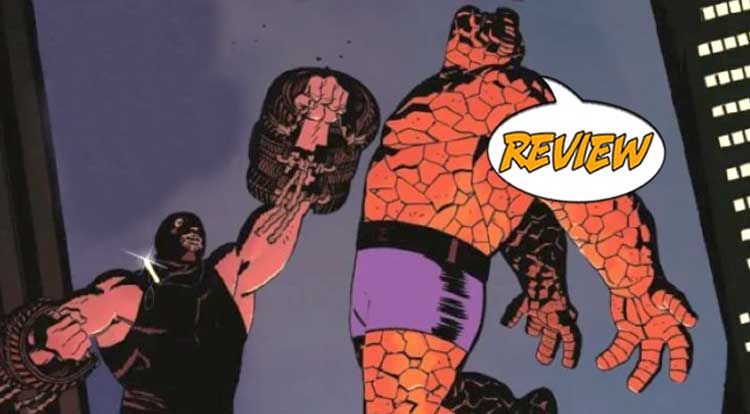 Back before he was married, The Thing had another lady friend, named Amaryllis.  This is the story of how he got his clock cleaned for her…  Your Major Spoilers review of The Thing #2 from Marvel Comics awaits!

Previously in The Thing:  From the stage at Radio City Music Hall to a secret underground conclave situated deep beneath Central Park, bashful Benjamin J. Grimm fights and fights and fights to rescue his newfound love, Amaryllis, from the seemingly unstoppable Brusque!  But there’s more going on than meets the eye, and the Thing’s epic journey continues to take larger and larger steps, from the gritty urban setting of Yancy Street to the far-flung reaches of the cosmos!

The Thing #2 opens in Carnegie Hall, where The Thing has been attacked by Brusque (whose used-tire wrist-bands are inspired) over a woman named Amaryllis.  The battle goes poorly for Ben, thanks to something that Brusque called “The Light,” leaving our hero paralyzed and unconscious in the rubble.  He awakens to find a young boy hovering over him.  Li’l Bobby explains that he saw where the villain went, and they make their way into tunnels under Manhattan where they encounter a hidden society that has sprung up around a strange temple built by Dale Carnegie and J.P. Morgan.  Bobby leads The Thing to Amaryllis, where he once again fights Brusque, but this time Bobby’s intervention makes the difference.  Either that or an armored gloves?  I’m not sure, there’s some intentional obfuscation going on here, followed by Brusque’s black heart leaping out of his chest and being harvested by some sort of reaper-figure.  Ben begins to take his new lady friend back to the surface, when he’s confronted by the locals, who insist that they cannot leave…

THE ENDING IS… STRANGE

…until their leader drops dead.  The ending comes abruptly and awkwardly, once again making me think that there’s something going on that the readers aren’t being let in on.  After all, last issue, Ben left his long-term squeeze Alicia behind only to become suddenly obsessed with Amaryllis DeJure, while Bobby Spector’s presence (and his name) are suspicious throughout this issue.  The sudden appearance of a field of broken corpses, the strange ending to the fight, and other elements make me think that this isn’t strictly happening.  Regardless, the art is really interesting, falling into a realm somewhere between Darwyn Cooke and Nick Dragotta, impressively balancing the rocky-hided Thing with Amaryllis’ remarkably beautiful, expressive face.  Jordie Bellaire is the real VIP of this issue, though, with an appropriate orange-hued color palette that compliments the linework beautifully.

It is my firm belief that The Thing #2 is some sort of hallucination, dream, or hoax, but not an imaginary story, but it’s still worth your time for the fun dialogue, the strong art, and the truly wonderful coloring job, earning a better-than-average 3.5 out of 5 stars overall.  My gut tells me that Ms. Dejure is bad news, but this issue makes it easy to understand Ben’s immediate infatuation with her, and that makes all the difference in the world.

There's no real explanation of the "when" of it all and the story has dreamlike elements that make me wonder if anything is what it seems, but the art is interesting and the coloring makes the show. I'd be interested in more of this.