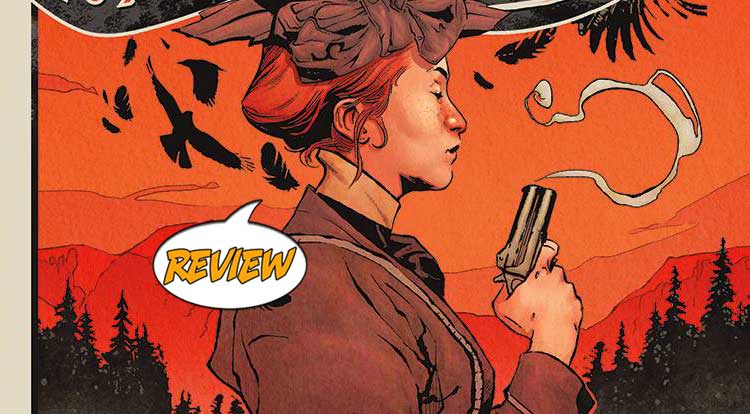 Nettie Bridger’s desperate journey to the gold fields of the frozen north has ended in tragedy.  Your Major Spoilers review of The Rush #2 from Vault Comics awaits!

Previously in The Rush: 1899, Yukon Territory. Nettie Bridger’s desperate journey to the goldfields of the frozen north has ended in tragedy.  But Nettie won’t believe it, can’t believe it.   Her son is alive — somehow — somewhere — and she won’t stop hunting until she finds him.  The valley has its monstrous guardians, and the miners have their secrets, and in this crucible of gore and gold the flickering flame of a mother’s love is barely enough to melt the ice.

“FOLKS CALL HIM THE PALE.”

In the tiny mining camp of Brokehoof, Nettie has found her son’s trail going (you should excuse the expression) cold,  and the local constabulary informs her that her son is dead.  There was no body, nor any idea where one might be, but they had a ceremony and moved on.  For her part, she can’t believe it, and when she finds his gold claim taken over by a group of ruffians, she suspects something untoward has happened.  Add in her prophetic dreams that tell her that Caleb is still alive, and you’ve got one unwavering mother, so much so that when threatened, she shoots one of her attackers in the head.  Nettie then finds that Caleb, being underage, signed the claim in his father’s name, which means that somebody transferred that claim illegally.  She entreats her lawyer friend into helping her look into the matter through legal channels, but…  That’s when things get stranger.

First and foremost, this is one beautiful comic book.   Addison Duke’s colors evoke the sepia-tone of photographs of the era, but still manage to convey a real and varied palette, including blues and greens.  The resulting effect not only gives it a vintage feel, it conveys the hardscrabble life that these men live among the dirt and the snow and the dead winter trees.  The story is likewise vivid, with every ancillary character seeming to have a life of their own, shown when LaPointe asks the assembled codgers and jamokes why their town is so strange, only to get answers ranging from something in the water to wendigos.  As the tension builds, the horrible knowledge that The Pale ( a mostly unseen wight with a giant spider familiar) has taken young Caleb likewise intensifies, climaxing in the horrifying final page, where Nettie’s face conveys every ounce of the terror she is feeling while… something terrible happens.

Spurrier is a man who can craft one hell of a story, pun intended, making The Rush #2 a deep and exotic read (for “weird remote 1800s gold-mining town” values of exotic), with engaging art and a truly beautiful coloring job rounding things out for 5 out of 5 stars overall.  My only real complaint in these pages is that there aren’t more of them.  Fans of Harrow County or The Sixth Gun might do well to look into The Rush.

Nettie's search for her boy is at once tense, terrifying and admirable, while the players she encounters range from unearthly to hilarious. This is a quality comic book experience.