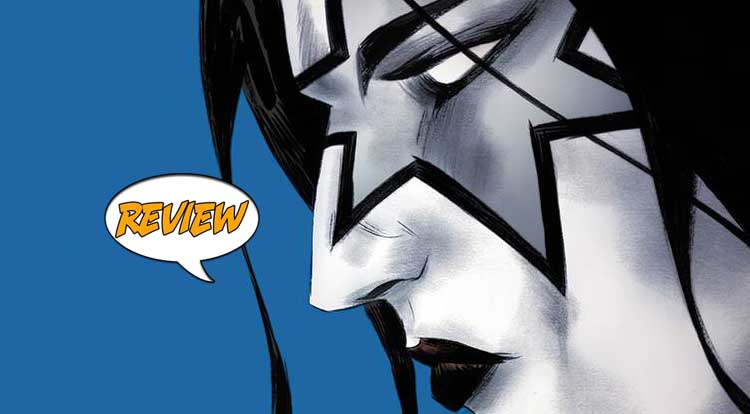 KISS has faced kaiju and killer robots, but no one is ready for the real secret of Darius Cho’s imaginary playland.  Your Major Spoilers review of KISS: Phantom Obsession #4 from Dynamite Entertainment awaits!

Previously in KISS: Phantom Obsession:  Facing Kaiju and Uzumaki style horror, the band finally are pitted against the mastermind of it all, and the man who holds their rock and roll fate in his hands: Darius Cho!

Catman, Demon, Starchild, and Space Ace are on the run from robotic samurai, each of whom bears their own face-makeup theming!  Worse still, even their super-powers (which they have even though this miniseries started with the normal band getting hired for a private gig, which implies that they just HAVE the powers all the time) aren’t enough to take out their foes, making for another retreat.  As they run, their companion, Miss Tzen, explains that the technology they’re fighting is actually reverse-engineered from alien tech, which accounts for the realism of the monsters and androids they’ve been facing.  Worse still, the basement labs are full of alien/human hybrid monsters.  On the plus side, they’re able to get the monsters to fight the robots, but Tzen is injured in the fray, leaving them to a surprising cliffhanger final page.

Celor’s art in this issue is hard for me to wrap my head around.  There’s a sketchiness to it that I really like, giving the action sequences a fluidity that’s quite pleasant, but the bright, flashy colors sort of work against it.  The use of blacks is also somewhat puzzling, with a lot of gray/blue segments that I would have found more successful if they were darker or at least higher contrast.  With a team whose clothing is primarily black, it’s noticeable.  The linework feels enthusiastic , but lacks detail at certain story points, which feels intentional, but also not entirely successful.  The events of the story are pretty much all running this time around, but the shocking final page makes it clear that there’s something more going on, which drew me back into the story effectively.  If you picked up this issue as your first introduction to Phantom Obsession, you might not be hooked immediately, but you would not be lost, and that’s important.

All told, KISS: Phantom Obsession #4 is more successful than not, with art that has some utterly amazing moments (Miss Tzen’s injury is one, the reveal of the alien hybrids is another), and the story is full of personality, including Gene complaining that his elevated Demon boots aren’t comfortable over long distances, leading to a better-than-average 3 out of 5 stars overall.  This issue reminds me of some of the independent comics of my youth, getting by on creator enthusiasm and ideas, and it makes for a fun overall comic experience.

A little bit of 'Westworld', a little bit of 'KISS Meets The Phantom Of The Park' and a heaping bowl of irony combine with experimental visuals for a unique reading experience.