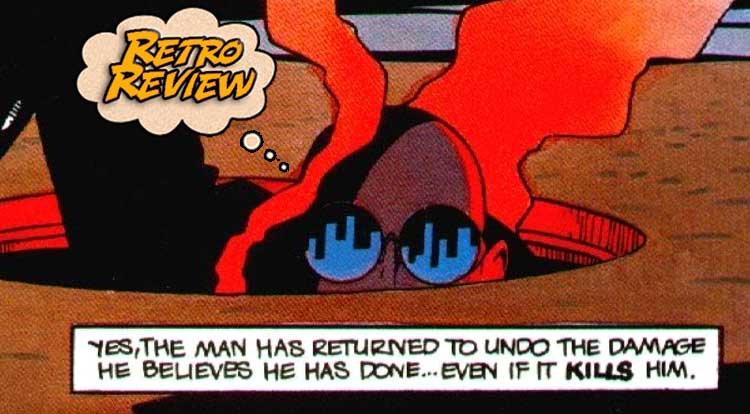 When a creation goes awry, it’s up to the architect to repair its flaws.  Your Major Spoilers Retro Review of Mister X #1 awaits! Previously in Mister X:  Radiant City was built to be the dream city, a vast and beautiful metropolis, designed to fulfill the grandest aesthetic and architectural ideals, it now moulders in dilapidation.  It’s citizens are afflicted with sleep disorders, opium addiction, and a surfeit of perversions.  It is a place as corrupt as the decadent upper class that rules it and the human parasites that prey on them.  Stranded in this Somnopoils is the mysterious Mister X.  His past shrouded in mystery, he makes his meager living as a private investigator.  While probing other people’s secrets, he must protect his own… We begin in the upper reaches of the city of nightmares, Radiant City, as Arnold tries to impress a girl.  It’s a simple tale, made more complicated when she expresses interest in renting a flyer and buzzing the city.  Renting a convertible, Arnold takes to the skies, allowing the Hernandez brothers to give us some clever exposition delivery. Gilbert and Jaime don’t scrimp on the beautiful cityscapes nor on the lovely women, but as Arnold and Patrice return home, she sees a strange man inside his apartment, one who seems to have huge, sunken black eyes.  Nothing seems amiss when they get inside, so he ignores her concerns in favor of a videotape of celebrity autopsies, while Mister X returns home as well. It’s a shocking moment for me, having not read a lot of Mister X stories, to have his girlfriend casually refer to him as “Santos” in these pages, as I didn’t recall him having a name.  Moreover, we get to see first-hand the secret to his ability to stalk the city and never sleep: An injectable called Insomnalin.  Once he’s shot up again, it’s time for more beautiful cityscapes as Santos/Mister X returns to the rooftops, only to get caught by Arnold’s men.  Of course, he’s not just a creepy dude trying to impress a girl, he’s also the corrupt head of the Zamora crime family, with a warning: If Mister X doesn’t stay off his case, he’ll take out his eyeballs with his thumbs.  A few pages (and one Luba cameo) later, it’s Patrice herself that helps him escape… out the bathroom window, where she pretends to be taking a shower. Unfortunately, Zamora’s men have found the case where he hid the spoils from the crime lord’s safe, leading to a rooftop confrontation that ends badly for MIster X… …or so he wants them to believe.  As someone more familiar with later issues of the book, the presence of Los Bros Hernandez (Mario would join Jaime & Gilbert with issue #2) puzzled me, until I looked into it.  Apparently, creator Dean Motter and illustrator Paul Rivoche were so late with their first issue that Vortex editors hired the Hernandez brothers to do it instead.  They later quit the book over payment disputes, after which Motter “returned” to writing the book he created.  All that weirdness aside, though, Mister X #1 is a visually impressive issue of comics, with absolutely gorgeous images on every page while introducing the weird world of Radiant City in fine fashion, earning 4.5 out of 5 stars overall.  The character traveled from Vortex to Caliber Comics to Dark Horse, last appearing in 2015.  There’s also a complete Dark Horse Mister X archive from 2008 or so, but I’m not sure it’s still in print.  Either way, this comic is well worth checking out, if you can find it.