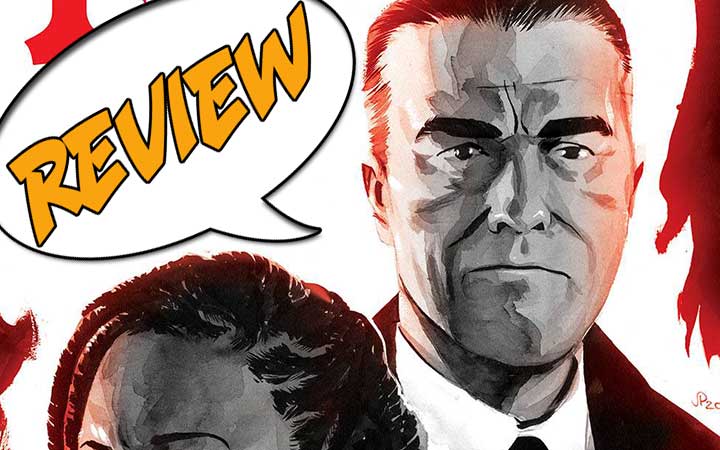 A burned down building has the Triad searching for an arsonist, and nothing will stop Newburn from helping them find them.  Your Major Spoilers review of Newburn #2, awaits!

Previously in Newburn: Emily has been selected by Newburn, a general fixer for less than legitimate people, to be his protege and the training has brought them to a burned down building.

“EVERYTHING I SAID WAS TRUE”

Newburn #2 opens with a series of vignettes of people talking about how Newburn can operate without being retaliated against.  Things then shift to the scene of an arson that destroyed a triad drug warehouse and killed one person.  Emily and Newburn do some investigating before they take off towards a newspaper office.  Along the way Newburn and Emily discuss the job and have a disagreement.  At the newspaper Newburn looks through photos taken from other arsons, while Emily looks up neighborhood watch groups.  After getting the information they need they pinpoint who the culprit is and go to confront them. The issue then concludes with a backup story about a man going to visit his brother in the hospital, who then questions the validity of his brother’s injuries afterwards.

A SUBTLE KIND OF SCARY

Newburn #2 isn’t treading new waters.  The setup is still taking cues from things like Training Day and The Professional, what stands out though is the character of Newburn himself.  He’s cool and collected.  Doesn’t emote, doesn’t use fancy talking, doesn’t make any qualms about what he’s doing.  The “matter-of-fact” approach he takes to the things he’s participating in, makes him a scary character in the best, subtle ways.  As for the story of this issue, it’s pretty straightforward, as the readers get more of an idea of just how connected Newburn is and how far he’s willing to go for his employers.  There is some good interactions between Emily and Newburn as she attempts to inject some morality into what she’s been participating in, which sets up a little bit of tension between the two without going full on into “good vs. evil” territory.

CLASSIC LOOK, ALBEIT A LITTLE DULL

There seems to be a go-to look for noir/crime focused comics and it’s this flat, minimally colored look with thick blacks that look like they were applied with the thickest of pen nibs and that’s exactly what we get here.  It’s a good look that fits the genre well.  Where this issue comes up lacking though is the expressions from the characters.  While it makes sense for Newburn to have a stoic look all the time, it doesn’t make as much sense for the rest of the characters to have that same look for most of the time.  Yet, that’s what we get here, which leaves things a little unclear when it comes to tone and emotions of certain scenes.

Newburn #2 takes the baton from the first issue and competently continues in the direction of creating a legend out of the Newburn character, using Emily as a well written reader surrogate, being led deeper into this world.  While the story itself isn’t very complex and it seems to be a one off story, it does a lot to flesh out things. The backup story isn’t bad, but not a lot there to stand on its own.  4 out of 5 stars.

While some second issues flounder as they try and capture the same buzz as a first issue, Newburn #2 sticks the landing by opting for a slower burn with intriguing characters with interesting moralities.