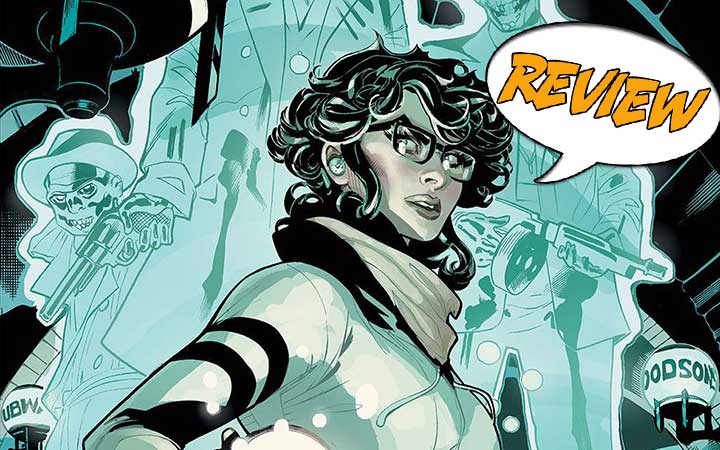 As Claire gets more used to her powers, she also investigates the ghosts she saw in the subway. Why are they here, and is there a connection between them and the Crossdraw Kid? Find out in Adventureman #7 from Image Comics!

Previously in Adventureman: It is a snowy wintertime in New York. After her last adventure, Claire sleeps for three days straight. Then she settles in for a more normal day, going to her mother’s old shop and helping to unload and schlep a bunch of boxes. Afterward she picks Tommy up from school. While they’re on the subway, a strange breeze blows through and they have a run in with some ghosts, who then vanish as quickly as they appear. A flashback introduces us to another superhero from the past, the Crossdraw Kid. As it happens, one of Claire’s sisters works at a nursing home where we learn that he is now one of their residents. He makes a call to a hansom cab driver, his grandson…

ANOTHER HERO IN THE MIX

Adventureman #7 opens again in the past as the Crossdraw Kid gets masked up as he talks with his grandson. His guns glow, and he explains that means, “Pay attention.” I like this as a concept. It’s a little tricker than something that warns specifically of danger. Then the story returns to the nursing home where we learn the old man is the little boy from the first scene, and the hansom cab driver is his grandson. He’s retelling this story and passing the family legacy down. The young man leaves with a box tucked under his arm and muses on being the fifth generation of Black Brooklyn cowboys, maybe even one of a kind. He takes his cab on the road. There is a glow from the box, and then he sees an art deco style skyscraper that didn’t used to be there. Oh how fun to have him as a hero!

Inside the Adventureman HQ, presumably, Claire’s sister Ursula is investigating the serum and trying to duplicate it. She has found some directions that seem to work, but she wants to take the vials in for testing so she really understands what is in them. One of Claire’s other sisters is researching the subway station where Claire and Tommy saw the ghosts, and she learns that close by to it, there is an abandoned station.

Claire is more of a doer than a researcher, so she sets off to explore. It’s a grand old station, the City Hall stop. Suddenly she sees a train pull in, or should I say, the ghost of a train. All around her she sees a variety of ghosts looking like they’re from the 1930’s or so.

She finds that creepy and leaves but regales her family with the story when they meet later for dinner. Ursula gives Claire a vial which is either the original serum or her own brew. It doesn’t feel the same to her though. Their father interrupts. He has had an offer to buy their mother’s store for an unusually high price. He isn’t interested and as he rips up the letter, there is a strange wind and a couple of ghosts appear and swoop around the apartment. They appear to be after the vial of original serum!

MYSTERY IN THE SUBWAY

Adventureman #7 has lovely artwork throughout. One of the things I particularly like is the way color is used to set tone and help set scenes. It’s subtle enough that on a first read through, it almost doesn’t register except for the fact that we can immediately tell when things shift, and it helps us follow the storyline. The Crossdraw Kid’s scenes lean toward blues and violets, which works not only for the flashback, but for outdoor scenes in the winter. Claire’s scenes are much warmer with browns and greens being prominent. Even when she ventures underground, this color palette is used.

And her underground scene, although short, is glorious. Even in just a few panels, the grandeur of a classic old subway stop is captured. It looks magical, as though it is frozen in time. We do not see any detritus or decay. When the ghost train arrives, it is as though the station was trapped in time as well. The ghosts we see here are unearthly, but they go through the mundane motions of life. We also get a strong impression of silence, as though Claire is seeing through time into the past.

Adventureman #7 deftly sets up a couple storylines that we see are intersecting in interesting ways. I also like bringing the new Crossdraw Kid into the picture. He’s got a terrific character concept that fits right in.

Why are ghosts of the past haunting the present in the middle of winter?