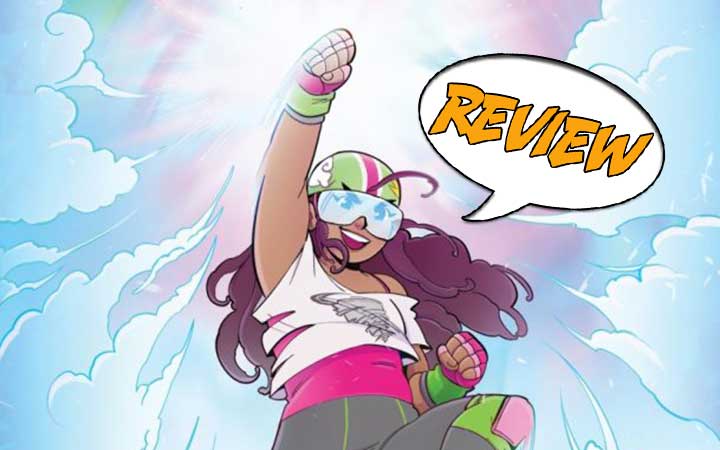 Dizzy has been chosen to fight Negatrixes and has all her special equipment. But can she do this alone? Find out in Getting Dizzy #2 from BOOM! Studios.

Previously in Getting Dizzy: Dizzy Olsen is a girl who has big dreams, but somehow, reality keeps intruding on them. While volunteering for the Mayor’s campaign, she has the idea to paint a campaign message rather than hang a poster and gets picked up for graffiti. Then, when she’s cleaning out her old stuff, she comes face to face with a group of odd creatures (Negatrixes) – and a young woman who claims that Dizzy is the Burb Defender. Is this her dream come true? Has she become someone special, the Chosen One?

Getting Dizzy #2 opens at the Skate Park. Dizzy goes there regularly for practice, coached by Skipper. She also hangs out with Scarlett, Payton, and Av. She is stubborn, and it’s a good thing. She may have magical gear and super-powers but skating still has a learning curve and Dizzy is still clumsy. Her training montage serves as an introduction to the other young skaters. Scarlett is an incredible skateboarder who sees the beauty in others. Payton enjoys bird-watching, but she’s also really good with her scooter. Av is pretty good on skates, but they really like making movies and using big words.

Reality bites. Dizzy realizes she is probably not that great a skater…yet. She doesn’t want to tell the others about her mission for fear they would think she’s nuts. Secretly, she doesn’t even think she’s their friend yet. Julio drops by briefly, and that’s when Dizzy learns there is a skate competition that weekend. Scarlett intends to compete, and she encourages Dizzy to as well. This cheers her up a lot.

But not for long. Av posts a bunch of videos of their group. Dizzy is mainly in the background, but video does not lie. Here she is, the Chosen One, the Burb Defender, and she is a terrible skater. Still, she goes back to the park. But Scarlett is strangely rude. Dizzy takes a look at her through her visor and spots a Negatrix on her back. Scarlett skates off, and Dizzy follows her. All the while the Negatrix only she can see keeps telling her how much of a loser she is. She falls, and Scarlett gets away.

When Av and Payton catch up with her, they know something is up. She decides to confide in them. Instead of laughing at her, they decide they want to help. Together they come up with a plan to lure Scarlett and give Dizzy a chance to get rid of the Negatrix. It sort of works, but there are too many Negatrixes so Dizzy can only scare them off. But Scarlett returns to her normal self. And Dizzy has a tough decision – does she now have a team, or is she destined to be a solo hero?

Getting Dizzy #2 has art that is vibrant and charming. The other girls at the skate park are as diverse as their skating styles and we see a lot of their personalities. Chipper is plainly somewhat older than the rest, and she takes on more of the role of a mentor, trying her best to coach Dizzy and take a step back and let the girls stay in the forefront. Dizzy wouldn’t be dizzy without a page showing her imagining herself as the greatest skater humanity has ever seen – right before she skates, shin first, into a low railing. Her fantasy is all the more poignant when we see Dizzy reviewing the footage of herself and realizing how far she has to go.

In fact, it hits her so hard that, while she goes back to the skate park, at first she doesn’t want to skate at all. She lies about being injured and we sense how she feels she does not belong. Scarlett’s turn on them all comes as a huge surprise, and I like that Dizzy quickly realizes what is happening to her. We get a sense of why she was chosen to become a hero when she sees that something is wrong, pulls herself out of her funk, and goes off to try help. It’s a classic moment in the Hero’s Journey, and it is fun to see it played out skating through obstacles.

After a frenetic first issue, Getting Dizzy #2 settles down and is easier to follow. Dizzy is plucky and even though she is the Burb Defender, her life is not easier, and she still has significant decisions to make. Only time will tell if she will make good ones.

Dizzy has her special equipment, but now the hard work begins.