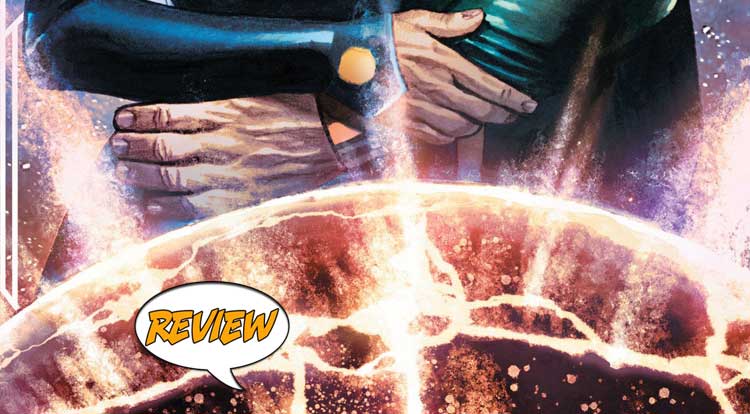 Everybody knows that baby Kal-El was rocketed from a dead planet, but what was that world like?  Your Major Spoilers review of World of Krypton #1 from DC Comics awaits!

Previously in World of Krypton:  Krypton is a utopia admired across the universe for its achievements in science and culture, but its shining towers and regal people conceal a planet rotting at its core.  When a catastrophic event befalls Krypton’s natural world, it points toward a mass extinction in the making, leading Jor-El, head of Krypton’s revered Science Council, to embark on a mission to save a world that may already have passed the point of no return.

Somewhere in the jeweled mountains of Krypton, scientist Nira-Ur is tracking the migrating herds of Kryptonian thought-beasts, puzzled as to why they’re so far from their usual grazing plains.  When she finds the entire herd dead of unknown causes, Nira heads back to Kryptonopolis to report her findings.  By the time she arrives, the man she is seeking (Jor-El, natch) is tied up with the formal naming ceremony of his niece, Kara.  Brother Zor-El is happy to see him, as is his old friend Dru-Zod, but the arrival of Jor’s cousin Kru-El is cause for confusion.  Nira-Ur arrives just in time to tell him the shocking fate of the thought-beasts, explaining that they seem to have just given up the will to live and died.  Jor-El is worried about the state of Krypton, but Nira-Ur believes it’s some sort of bellwether event, heralding upcoming doom.  Before he can cope with this news, though, Jor-El is targeted by separatist assassins, who intend to wipe out the reigning heads of the scientist faction, Zor-El and Jor-El.  The head of the House of El struggles with his would-be killer, accidentally causing the man to fatally shoot himself.  Shaken by the chaos, Jor-El is  confused about who would want to harm him, when Zod arrives with the handcuffed culprit: Kru-El!

Okay, first?  Kru-El is too easy and Zod is too evil for this to be exactly what it seems.  That said, it’s an exciting start and those who don’t remember Kru-El from the Silver Age will still likely enjoy what’s happening here.  Venditti’s script brings in threads from old stories in ways that feel fresh and interesting, and the friendship of the El brothers and General Zod is a nice touch that adds drama and uncertainty.  The art of Michael Oeming is always a treat, with hard edges that really make the political turmoil and intrigue of Krypton’s various factions more exciting.  I especially like the final page expressions on the faces of Dru-Zod and Kru-El, while the costume designs hearken back to previous Krypton tales with clever new facets.  If, as they want us to believe, ALL aspects of Krypton are true, it’s nice to see the balance of Silver Age headbands, Bronze Age headdresses and modern tunic-y things balancing out.  Best of all, the thought-beasts keep their classic “television set for a skull” design, making Krypton’s wildlife feel truly wild and alien.

In short, World of Krypton #1 engages you in a story whose end was written almost a century ago, doing so with fun characterization, new twists and turns of action, and an excellent art job, making me want to follow Superman’s father as he comes to the realization that his world is doomed, earning 4 out of 5 stars overall.  It’s always hard to write a story that so tangential to the primary narrative life of a character like Superman, but it’s a testament to these creators that this issue makes such a strong impression on me as a reader.

Heck, maybe this time Jor-El will figure it all out and save the world!

It's the fourth or fifth time I've seen these events rewritten and recontextualized, but it's also a pretty good take, especially Oeming on art. But is it essential?