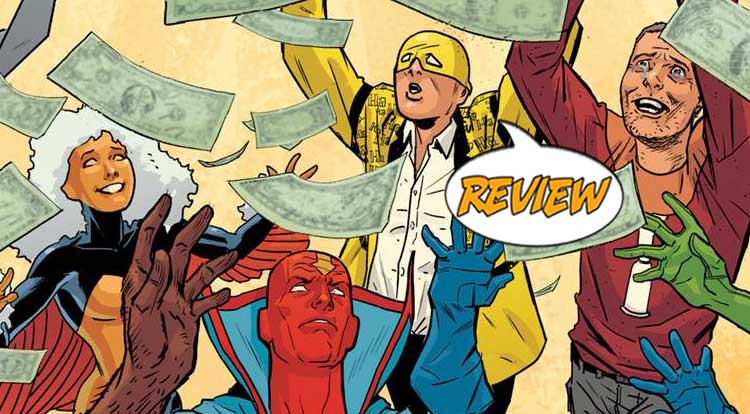 There comes a point where even a superhero has to make an honest buck.  Your Major Spoilers review of One-Star Squadron #1 from DC Comics awaits!

Previously in One-Star Squadron:  This ragtag group of heroes led by Red Tornado is here to provide service with a smile. All you must do is send a request via their on-demand hero app and they’ll answer any call. Whether it’s a children’s birthday party or an alien invasion, no job is too small or too big!

THE HEROES WHOM NO ONE IDOLIZES (AND POWER GIRL)

Founded by the Red Tornado, Heroz4U helps to find opportunities for the less-successful heroes of the DC Universe, offering a range of services from personalized video greetings to personal appearances to… telemarketing?  Their slogan is, “Once a hero, always a hero!”  This serves as invitation enough for a couple of morally compromised orderlies as Metropolis County Hospital to dump one of their long-term patients on the Heroz4U doorstep for “safekeeping.”  Red Tornado realizes that he’s Jose Delgado, the former Gangbuster, now over-the-hill and suffering from the after effects of one concussion too many.  While Reddy tries to deal with the injured hero, we find Power Girl checking in on her ace telemarketing team (Flying Fox of the Young All-Stars, The Heckler and G.I. Robot wearing a toupee), sharing her secret to success: The Self-Help books of Maxwell Lord.  (Heckler, as always, cuts straight to the point, calling her words “the self-serving logic of power” and tossing Max’s book in the trash.)  Red Tornado tries to take Delgado home, only to have a woman claim she doesn’t know him, while Power Girl meets with the board of directors to undercut Reddy’s leadership skills, maneuvering to take over the organization as its new CEO and administrator.

“ARE YOU IN A FLASHBACK?”

On the face of it, this story presents itself as an ’80s-style capital-r Relevant story, addressing the matter of what to do when you’re no longer on (or never made it TO) the top of the super-game.  The problem comes not only in the tone (which is *grindingly* cynical and hopeless) but the roles assigned to the heroes.  The Red Tornado, a character whose original story arc was about the joy of finding his humanity is an ineffectual middle-management suckup, while Power Girl, whose origins were in empowerment and ’70s women’s lib, turns into a backstabbing corporate bitch.  The use of the secondary character is entirely mocking, joking that ’90s Black Condor dresses like a prostitute, that G.I. Robot is now a venal jerk, and that The Hawk and The Dove are working as bouncers and dumb muscle for pharmaceutical conventions.  In short, it’s a parade of indignities whose point seems to be “Boy, those superheroes sure are dumb!”  I have long been a fan of the art of Steve Lieber, and this issue is full of lovely Lieber touches, from Hawkman on a segway to Heckler’s new business-casual uniform, but it’s all in service of a story that doesn’t really gel with it.

In short, the takeaway from One-Star Squadron #1 reminds me of Heroes In Crisis (which raised the spectre of superhuman PTSD but didn’t have anything to say about it once it established that concept) putting us in a world where supers have to scrape and side-hustle their way through life in “realistic” fashion, making the accumulation of money the point and throwing in a motley crew of characters perceived as nothing but second-stringers to hammer it home, earning 2.5 out of 5 stars overall.  The satirical nature of the story is emblemized by the choice of cast, a crew from across DC’s publishing history that Russell clearly thinks are lame and worthy only of scorn, but none of whom actually act like the characters they’re supposed to be lampooning.

If this premise really appeals to you, I recommend 1989’s Hero Hotline, which at least has the self-awareness to create its own cast of has-beens and never-was’s.

It's a superhero story that openly loathes superheroes, with art that is consistent and likeable, set in a world where everyone seems to be a different flavor of bastard. I don't expect that I'll be back next issue.