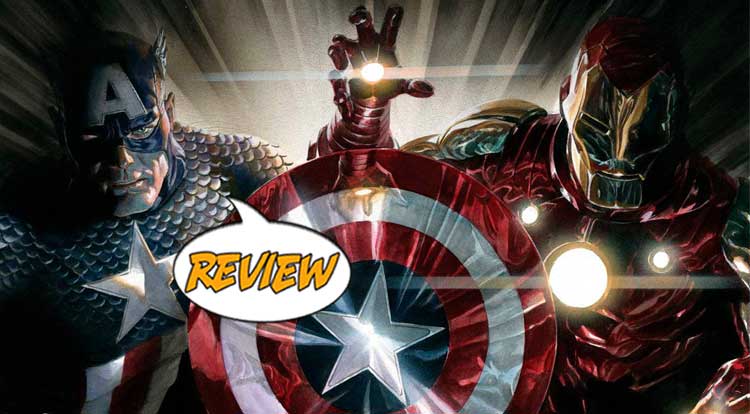 A would-be double-agent, a pair of Avengers, and secret players hiding in the shadows.  Must be Monday in the Marvel Universe.  Your Major Spoilers review of Captain America/Iron Man #1 from Marvel Comics awaits!

Previously in Captain America/Iron Man:  A government agent turned Hydra provocateur stages a daring breakout on her way to prison, attracting the attention of both Iron Man and Captain America.  When Steve and Tony realize they both have a connection to the slippery fugitive, they team up to track her down, only to discover she’s not the only player on the board with big plans and sinister motives…

WHO IS VERONICA EDEN?

Captain America/Iron Man #1 starts in the past, with a very hungover Tony Stark waking up with a woman whose name he doesn’t remember, a woman who apparently slept with him in the hopes that he would help her get a project off the ground.  It’s… not a good look for him.  Years later, Veronica Eden has been convicted of crimes related to Hydra (though she swears she’s not with the terrorist group) and is being transported to prison, when her convoy is attacked by a minor superhuman called Fifty-One.  Before she is murdered, though, both Iron Man and Captain America arrive to deal with the situation, effortlessly cooperating to stop the attack and save the lives of passersby, but NOT keeping Veronica out of the hands of her would-be kidnappers.  Another batch of superheroes, all former members of the Fifty-State Initiative, arrive to save her, but things quickly spiral out of control, and Eden once again slips away, with an ominous mission statement: She’s gonna save the world, one dead superhero at a time.

There is a panel early in this issue where Captain America is drawn with a strangely bulbous, cross-eyed face, one of several bizarre facial constructions in these pages.  It’s hard to get past, even though the layouts and story-telling are pretty good.  The first appearance of the Paladins team (consisting of Pioneer, Vox, Prima Donna, and Think Tank from The Initiative) is a classic badass power walk moment from Unzueta, but even that moment has some issues with facial detail.  In the big picture (literally), though, the art is pretty solid and Iron Man’s armor, one of the hardest parts of any Marvel story, looks great.  Much of this issue is narrated by Veronica Eden (who I’m pretty sure holds the place in the Marvel Universe that Sharon Carter does in the Falcon and The Winter Soldier TV show) and it’s fun, light Bendis-style dialogue throughout.  The overall story makes great use of the bits and bobs from the big picture Marvel crossovers of 10-15 years ago, and honestly, I like the reminder that these things actually have consequences.

In short, Captain America/Iron Man #1 uses the character’s long histories to its advantage, crafting a plot that brings both heroes in from different places to address the same mystery, with art that wobbles, but never fully stumbles, earning 3.5 out of 5 stars overall.  If nothing else, it’s a big superhero blowout featuring a brain in a jar wearing a cape, and that’s just the kind of comic book nonsense I’m happy to endorse.

This is an exciting story that makes smart use of recent abandoned continuity bits and sets up a mystery for two core Avengers to unravel. What's not to like?