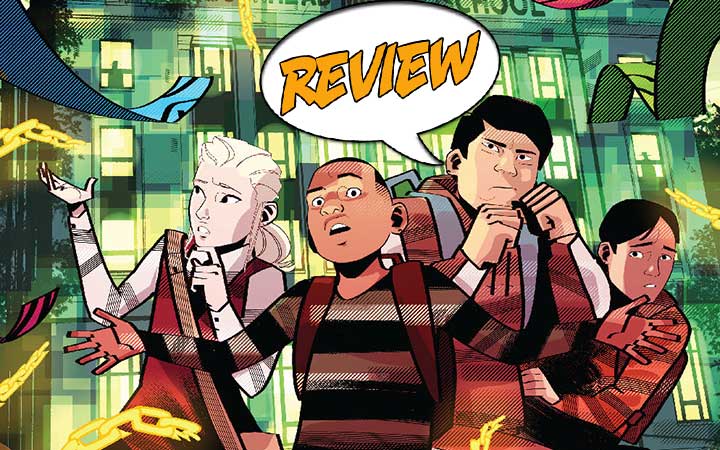 It’s Toba’s first day of school in the small town of Buckhead. While everything seems normal, who knows what surprises lurk in the basement? Find out in Buckhead #1 from BOOM! Studios.

Previously in Buckhead: Toba Adekunle has immigrated to the United States with his mom. Her company has branches all over, but instead of moving to an interesting city, they now live in the small town of Buckhead, Washington. It’s the first day of school, and Toba has a lot to get used to…

STARTING WITH AN ARCHAEOLOGICAL MISHAP

Buckhead #1 opens at an archaeological dig beneath the jungle near Benin City, Nigeria. It’s a deep excavation in the heart of the old Edo Kingdom. Three researchers, Wole, Bola, and Meredith are doing some scanning when they find a secret mechanism and some strange glowing. Whatever this is, Meredith thinks her dad will pay well for. Bola doesn’t trust him and wants whatever the find to remain in Nigeria. Wole tries to take some measurements of the glowing device. There is a burst of electricity – and he vanishes!

We pick up the story again a year later, and now the setting is Buckhead, Washington. Toba needs to get going for school. Not only is he reluctant, but it’s one of those days. He doesn’t like any of his shirts. He has a zit. His mom vetoes the shirt he finally chose. A friend, Josue, stops by to walk with Toba to school, and sympathizes about his mom.

One the way, Toba spots an interesting boarded-up house. Strangely, Josue doesn’t seem to see it. Toba leaps over the fence and suddenly Josue is motionless, as in absolutely frozen. Toba sees a strange tattoo on his neck. Then a woman from the house challenges him and demands to see his tattoo. When he admits to not having one, she sets her dog on him. As he leaps back over the fence, Josue returns to normal.

In school Toba must face the challenge of kids and teachers who can’t pronounce his name, and Josue gives him the concise tour of school horrors, or at least classes. He meets a couple other young people, Romy and Mel, and the four of them form a little group.

Toba talks them into skipping the dreaded social studies class and explore the computer lab, which is currently being upgraded and off limits. Those computers just have educational stuff on them, but Mel finds a closed door that leads to a basement, a secret room, and another computer system. Toba explores it and finds a game called Elseverse, a game set in the old Edo Kingdom in Benin, a place his parents used to explore, before his dad went missing. They play until the period is over, but just before they stop, Toba finds an NPC who calls him by name, and who looks just like his father – Wole, the man who vanished in the opening scene!

A VIBRANT SLICE OF LIFE

The art of Buckhead #1 features bold, somewhat blocky lines that give it a crisp, dynamic feel. The opening is strong and has an Indiana Jones-like flair. The Edo Kingdom ruins feature some enormous chambers. The mysterious, glowing object is a sphere that sits on top of a small pyramid. Wole’s disappearance comes as a complete surprise. Since we see Wole again near the end of the issue, there must be a link between what happened in Benin and what is happening in Buckhead, but to figure out the link is intriguing.

I love the young people in this book. They’re a diverse little group, which is great, and they are drawn with a lot of expression. During the lightning tour of the school, we see then in various stages of boredom that I’m sure many readers can identify with. When they skip class and find the secret computer room, we see them vary from hesitation (and hoping they don’t get into trouble) to fascination about the possibility of uncovering a mystery right in their own school. We also see them for a few panels as their avatars in the game, and the costuming is really cool.

Buckhead #1 does a good job setting up the initial mystery (or mysteries) of the story and gives us a sense of the characters through observing them interact. While “caught in a video game” may be a trope we have seen before, I like that we have yet to find out how it all connects.