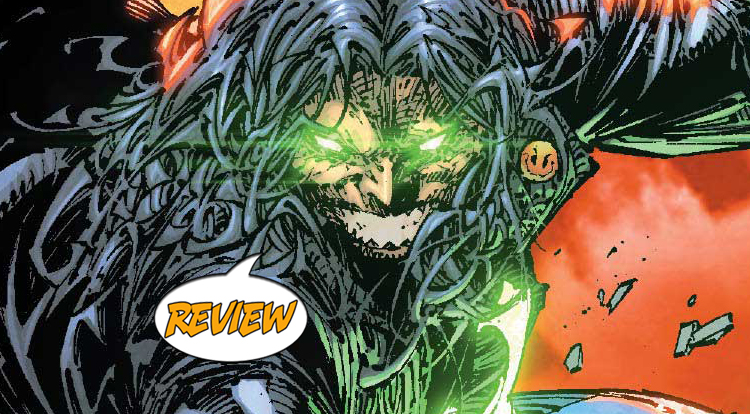 It’s been thirty years, and now Evil Ernie walks among us again!  Hide the good silver (and your immortal soul!).  Your Major Spoilers review of Evil Ernie #1 from Dynamite Entertainment awaits! Previously in Evil Ernie:  After Ernest Gleckman is mortally wounded, he discovers he must “pay down his new lease on life” by serving as a part time fixer for a death cult.  Each time he manifests his dark side as Evil Ernie it becomes harder to maintain his tenuous grip on his inherently good humanity…  and worse, whether he even WANTS to!

On a highway outside Potsdam, New York, a traumatized man gets pulled over by the highway patrol.  He’s barely able to hold back his gorge (and his clearly been vomiting already), making them think he’s drunk, but when he points them to what made him sick, they (and the reader) understands.  The proverbial gang of bikers has been massacred, torn to pieces by someone who clearly enjoyed their work.  Nearby, we find a young man lying in the woods, covered with blood, having an argument with the button on his leather rocker jacket.  We jump back a bit to meet Ernest Gleckman, would-be student body president, a nebbishy young college student.  He is well-liked by his peers, has a hot girlfriend and a secret vice: He loves to go the local metal bar for karaoke.  After getting a big ol’ kiss from his pretty girlfriend, he also gets a buss from the incredibly hot bartender, who slips him some tongue and also a mysterious button with a vicious, smiling face on it.  He kills at karaoke, but on his drive home, he GETS killed, run off the road by the bikers we saw filleted earlier in the issue.  As he bleeds out, his button giggles and starts to speak…

The first impression I had of this issue was that the Brett Booth drawn cover was incredibly unattractive to me, not only in its layout and overly noodles pencil work, but with the garish colors.  That said, the interiors of the comic are much more to my liking.  In fact, I felt like I was reading an issue of Red Sonja or Vampirella, which has both good and less good aspects.  On the one side, it gave me a clear idea of what to expect from these pages, but it also didn’t really feel a lot like the Evil Ernie of Pulido and Hughes days.  Granted, it’s not the ’90s anymore, but this issue’s story gives Ernest a new name, an entirely different back story and removes much of the over-the-top tragedy, blood, and squalor that defined the childhood of Ernie Fairchild.  One could opine that this is a new host for Smiley and the creature/thing/excellent tattoo that is Evil Ernie after his successful destruction of another world, which would make Master Gleckman the new avatar.  None of that is really addressed in these pages, which makes me think that fans of Ernie will need to hang around a bit to find out if this is to their liking.

For me, though I wasn’t a hardcore fan of classic Chaos!, the changes in this issue flatten out a lot of the uniqueness of Evil Ernie’s character, meaning that Evil Ernie #1 may be a hard sell for fans of the original, but it will hit a sweet spot for fans of modern Dynamite Comics, earning 3 out of 5 stars overall.  I’ll be interested to see what the new paradigm is with Smiley and Ernie, what’s up with the bartender and what they do about the “Lady Death is over at Avatar Press” problem, but hardcore fans should be aware that this is its own thing.

It's very much the modern house style at Dynamite, with a story that adds a few new wrinkles to Ernest (and Ernie)'s characters, which might anger old-school Chaos! Comics fans.