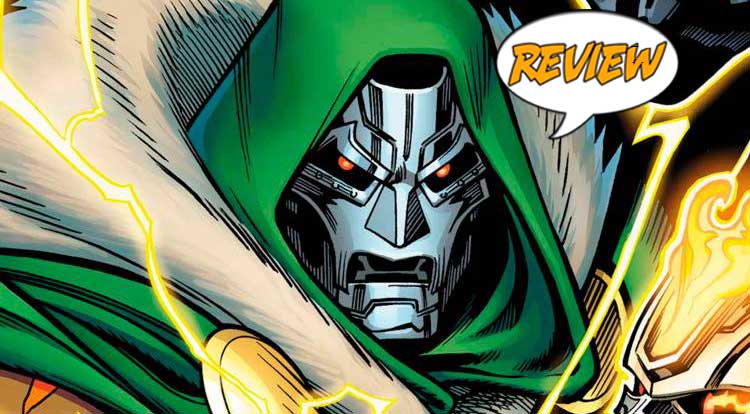 The seven-hundred-fiftieth issue of the Avengers is here, and with it come some BIG changes.  Your Major Spoilers review of Avengers #50 from Marvel Comics awaits!

Previously in The Avengers:  Witness the jaw-dropping conclusion of “World War She-Hulk!”  Learn the true purpose of the prehistoric Avengers!  Uncover the shocking secret of the Iron Inquisitor!  Behold the most powerful collection of super-psychopaths that any Earth has ever seen!  Watch the Avengers recruit some shocking new members!  And follow the Ghost Rider on a quest for vengeance across the Multiverse that will spark an all-new era in Avengers history!

After being betrayed by Gorilla-Man, She-Hulk was captured and transformed into the Winter Hulk, then sent to destroy Atlantis.  Jennifer Walters, however, resisted the brainwashing and went along to see what was happening, leading to her being stuck at the epicenter of last issue’s Gamma Bomb explosion.  Forever changed by the experience, She-Hulk chooses to leave the Avengers to deal with her own stuff for a while.

In the past, Ka-Zar continues to stalk the Avengers of 1,000,000 BC, discovering the true reason behind their alliance (and also revealing a few heroes of the years in-between that feature Aaron’s signature creative touches) and getting in waaay over his head as well.

In Africa, Gorilla-Man watches over a comatose Ursa Major, while Namor throws himself on the mercy of the woman who saved his kingdom and Valkyrie Jane Foster discovers a Deathlok who is looking for Avengers.  When told she isn’t one, the creature responds “Not YET.”  After being identified by a Deathlok as an Omni-Avenger, Ghost Rider Robbie Reyes finds a brave new world, while Princess Power changes the balance of the Squadron Supreme of America by allying not only with The Red Widow, but by altering the destiny of Doctor Spectrum.   While all of that goes one, a new Masters of Evil forms, and The Orb loses his life.  #RIPOrb

BUT *TEN DOLLARS* FOR A SINGLE ISSUE?

The upside of a comic this massive (96 pages) is the sheer amount of incident that we get within it, as more than a dozen ongoing subplots, most of which have been in play since #1, get development and updates.  The solicitation promises shocking recruits to the team, but no one officially joins in these pages, which is frustrating.  (It’s pretty clear that The Sub-Mariner and Valkyrie will be joining sooner rather than later, and possibly Gorilla-Man and Ursa Major as well.)  Aaron uses his huge page count for maximum efficiency, showing short sequences and vignettes from all over time and space, introducing his Masters of Evil, giving Galactus a new herald, and even cameoing the original 3-D Man, all of which makes the continuity nerd in me happy.  The art also makes me happy, as the different artists don’t clash with one another, and the changes are wisely in-between chapters, which helps not only with the transitions, it creates distinct visuals for each universe.  There’s also a setup for the upcoming Avengers Forever comic, and a cute follow-up story where Thor meets another young man who sometimes gets defined by his melee weapon as well.

BOTTOM LINE: WORTH IT, AT LEAST FOR ME

In short, Avengers #50 takes its mandate as a giant-size anniversary #750 seriously, wrapping up World War She-Hulk, setting the stage for the next arc (or the next FEW) and doing it all with zest, enthusiasm, and some really strong art, earning 4.5 out of 5 stars overall.  If you’ve been with Aaron’s run from the beginning, this one is a big watershed issue, but if you haven’t, it might be a bit overwhelming.  There’s also the question of whether or not you can stomach spending $9.99 on a single book, but given that it’s the size of three regular $4.00 issues, you’re actually getting a better deal per page than the average issue of Avengers.

It seems like a third of the Marvel Universe appears in this issue and a lot of things happen, setting up for the new Avengers era. The only real downside comes with the pricetag that accompanies an issue five times the regular size.