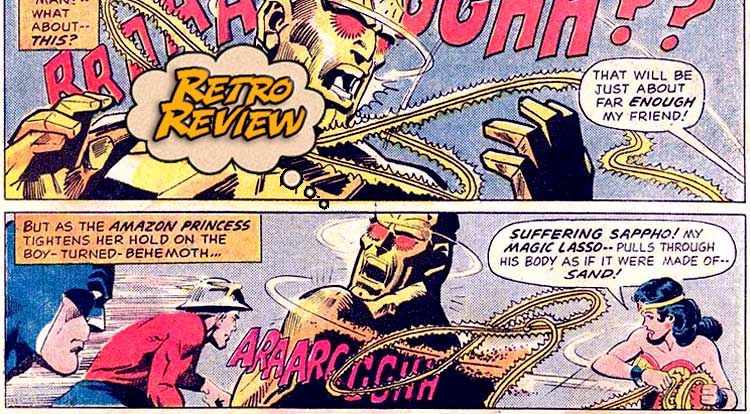 What is the secret of The Creature in the Velvet Cage?  And what does it have to do with The Sandman?  Your Major Spoilers Retro Review of Justice League of America #113 awaits! Previously in Justice League of America: He was born Sanderson Hawkins, on the world designated Earth-2.  Orphaned at a young age, Sandy was adopted by Wesley Dodds, who was secretly the vigilante known as The Sandman, leading to Sandy joining in him in the field as his kid sidekick, Sandy The Golden Boy.  As an adult, Hawkins worked with the Justice Society of America, using a complex set of powers involving geokinesis, seismic wave generation, and the ability to turn himself into a being of pure silica.  But… how in the world did this young man even get super-powers to begin with?

We begin with the annual team-up of Justice League and Justice Society, taking place this year on Earth-2. After easily routing a group of thugs (as a team with two Flashes, Green Lantern, the Golden Age Wonder Woman, and Superman should), the team is stunned when The Sandman suddenly makes a run for it.  Tracking the mysterious alarm, the JLA and JSA track Wesley Dodds to his penthouse home, which they find wrecked.  When Batman starts to piece together the clues, Wesley Dodds begins to share his darkest secret.  Years ago, Wes was working on a new weapon for his arsenal, a Silicoid Gun to help defeat criminals more efficiently.  Sadly, the design was not successful, exploding in Sandy’s face! Horrified by his failure, Sandman destroyed his gold-and-purple Jack Kirby-designed costume, returning to his old-school gas mask and hat combo to mourn the loss of his de facto son.  For years, Wes has kept Sandy sedated and comfortable, only for the Golden not-longer-a-boy to bust free and rampage across the city.  Dick Dillin doesn’t get a lot of credit for his pencilling chops, but every page of this comic is full to bursting with superheroes in action, and they all look amazing, especially Sandman himself.  The power of the transformed Master Hawkins possesses power enough to stymie even Superman, while the rest of the team switches between defense and offense.  When the yellow-colored monster strikes down Green Lantern, Sandman once again leaps in to shut down his former sidekick. When the city is rocked by an earthquake, the League and Society minimize the damage, but Green Lantern’s ring-analysis reveals the shocking truth of the situation: the Sandy-Thing wasn’t CAUSING the damage, he/it was trying to mitigate it! Sandy actually broke free to save lives, as his new silicate body comes with geokinetic powers that allowed him to sense the oncoming quake and he wanted to try and help.  The Sandman is once again horrified, realizing that his attempts to protect his son led him to lock the boy away for no reason, imprisoning Sandy for years to protect his own fragile ego. Thanks to DC’s mid-70s hundred-page format, this issue contains a classic Justice Society tale featuring the Injustice Society, and a Gardner Fox/Mike Sekowsky JLA tale from 1962, making for a jam-packed giant-size issue.  Justice League of America #113 is one of the most memorable of a truly game-changing run by Wein, with Dillin’s steady and underrated art pulling together the visuals, and Giordano adding the polish to make this one worth 4 out of 5 stars overall.  The 1970s are a tumultuous time for the League, but this issue is not only well-done, it provides springboards for a whole new career for Sandy Hawkins in the pages of JSA twenty years later.

This story has everything: Pathos, tragedy, hubris, superheroes in action and a moral about family. What more could you ask for? How about a killer art job from Dillin and Giordano and a treasure-trove of reprints to make it worth the price?