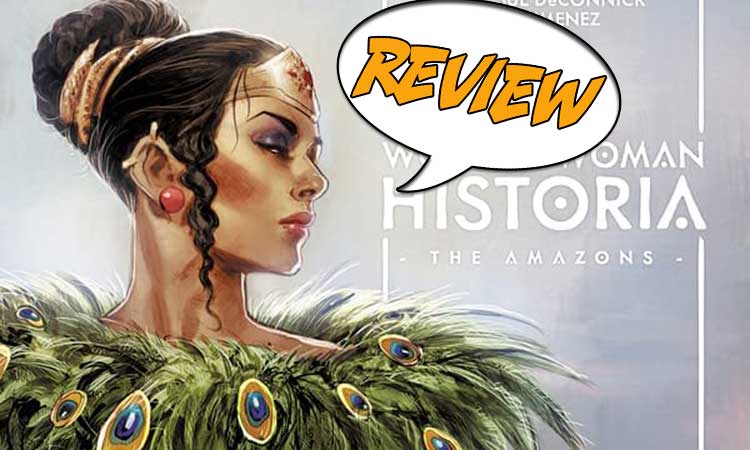 You think you might know the history of The Amazons, but you haven’t seen anything yet.  Your Major Spoilers review of Wonder Woman Historia: The Amazons #1, from DC Comics, awaits!

WONDER WOMAN HISTORIA: THE AMAZONS #1 (OF 3)

Previously in Wonder Woman Historia: The Amazons, Millennia ago, Queen Hera and the goddesses of the Olympian pantheon grew greatly dissatisfied with their male counterparts…and far from their sight, they put a plan into action.

THE BIRTH OF CONFLICT

Wonder Woman Historia: The Amazons #1 opens with an opening narration introducing the gods of women and the horrible treatment mortal women have faced at the hands of men.  Hera, Hecate, Aphrodite, Athena, Demeter, and Artemis, go before Zeus to demand justice for women.  Their demands are ultimately dismissed, so the goddesses, save for Hera, hideaway in Hades.  In the underworld the goddesses each offer up a piece of themselves or something they control and encase the offerings in containers then venture to the mortal world.  There, from the jars, they give birth to the first Amazons.  Athena speaks to Hera to ask why she hasn’t joined them, Hera informs her that she hasn’t because she has already seen what will be.  On earth, Hippolyta is assisting a midwife in delivering a child.  The baby is born a female and is sentenced to death because the family already has two.  Hippolyta is ordered to carry out the sentence by sending the child down a river, she does so, then feels guilty and tries to find the baby.  This journey leads her to a confrontation and her first meeting with The Amazons.

Wonder Woman Historia: The Amazons #1 is a mind-blowing comic book.  Stories involving gods, especially the Greek pantheon has been a fertile field to harvest comic book plots from for decades.  But never has the sheer size of the gods been captured with so much skill and expert execution.  Every action taken here feels like a labor that could be it’s own myth.  The characterizations of the goddesses and gods makes them recognizable, yet otherworldly and terrifying.  They deal in absolutes and accept violence as a part of existence and the idea of a conflict among them truly seems scary in these pages.  This doesn’t just feel like another “secret origins of blah blah blah” this is a proper re-telling of a section of the DC Universe that often gets overlooked but is integral to not only one of the most recognizable characters in their catalogue but the universe as a whole.  Outside of the events of the story, this is a book written with a sense of bluntness that is actually refreshing.  There’s no hidden messages here, this is a book that lays it out there, men have done horrific things to women throughout time, and if the gods exist, then they too are culpable for allowing it to happen, and they all deserve punishment.    There is no middle ground, and in fact the one attempt to try and legitimize the abuse, makes Zeus come off as a spineless imbecile, which is a refreshing take on the myths.

As much as the story and characters are well done, the art of Wonder Woman Historia: The Amazons #1, is even more impressive.  The designs alone are something to be seen.  These aren’t just humans with flourish as we’ve typically seen when gods are depicted.  These are beings that don’t play by human logic and their forms are an extension of that.  Artemis is a wild child that looks like she has emerged from gnarled woods.  Athena wears a cold expressionless mask over the void that is her actual face. Then you add the shifting, chaotic settings these gods operate in and you have a comic book that doesn’t look like anything out there right now.

THE BOTTOM LINE:  CONTENDER FOR COMIC OF THE YEAR

Wonder Woman Historia: The Amazons #1 is a comic book that makes no attempts to be accessible to anyone.  It is a bold, abstract, surreal, massive, and intense, and it makes no apologies for that.  Not only has the writing captured the grand scale that stories about gods and myth tend to lack, it backs that up with visuals that could be sold on their own without any story and still demand a premium price.  5 out of 5 stars.

Every year there’s a couple of comics that come out and immediately take the status of “must-read”, this is one of those for this year.