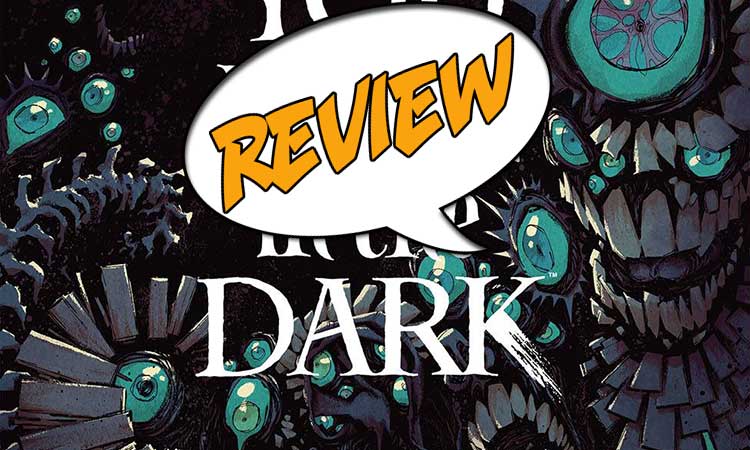 The Me You Love In The Dark #5 Review

Ro finally sees the creature for what it is and now must figure out how to get away from it. But what can she do against a powerful force of darkness? Find out in The Me You Love in the Dark #5 from Image Comics!

THE ME YOU LOVE IN THE DARK #5

Previously in The Me You Love in the Dark: Ro has been painting more productively than ever before, but is starting to feel cooped up. The more she wants to go outside, the more the creature manipulates her to stay inside, with it, in the dark. It even starts getting sulky when she paints to the point of losing its temper. It immediately apologizes, but Ro recognizes that this is not a good relationship. Things come to a climax one day when Attison finds her and she lets him in, despite the creature’s order not to. The studio manager flips on the lights, looks at her paintings, and immediately becomes concerned. And the creature becomes insistent that she makes Attison go away.

When The Me You Love in the Dark #5 opens, we can feel that we are crashing toward the ending. Attison lies dead on the floor and Ro is stunned. The creature explains that it just made him leave. It only feels bad, apparently, in that killing him has made Ro upset. The scales fall from Ro’s eyes, and she tells the creature to stay away from her.

That isn’t what it wants. It grabs her and says it understands it made a mistake, but now it would like to be forgiven. Its face is weird and toothy, asymmetric. Ro recognizes it as the first painting she did of it. It wears this face to please her, because this is plainly the face she loves. Then it tries to make things better by animating Attison’s horribly damaged body.

Art imitates life, but in this book, life also imitates art. Between the creature and Ro’s imagination, she found inspiration for her paintings. The creature took inspiration from her images to further form itself, but in doing so, has discovered things about her as an artist but it also assumes that that is also who she is as a person. Ro again desperately wants to get out of the house and have a chance to clear her mind. The creature insists she is lying. It doesn’t want her to go. Her inspiration has brought it to more life and has brought it a sense of something it thinks is love. It does not want to give her up.

It insists that she paints. That will make her feel better. Her painting, her music, some wine. It thinks that will take them back to where they were when she first started painting in the dark.

And paint she does. The creature did understand one thing about her art. Painting helps Ro see things more clearly and can help her understand herself. Art comes from deep within. It can bring honesty to the surface. She pours into it what she sees as the real creature. And then she gives it a taste of her true self. The ending is intense and unexpected, but perfect.

The Me You Love in the Dark #5 goes beyond the creepy to the downright horrific in the art. Up until now, it has been getting more sinister. Attison’s arrival and unfortunate demise are the catalyst that grounds Ro back into reality and raises the stakes for us, the readers. Attison has not been killed quietly. His body has been disemboweled and torn apart. His blood has spattered onto Ro’s face.

And the horrors do not stop there. We have seen hints of the otherworldliness of the creature, but it comes into full play here. When it wants arms or hands for a purpose, it can create them anywhere in the house. We’ve seen images of it with lots of eyes and teeth and let me just say that this is a very toothy issue. What makes it additionally unsettling is the idea that it is taking some inspiration for its appearance from Ro’s work. She has had a hand in creating it from the start. When it goes badly, how much of this is a reflection on her?

Like many terrific horror books, The Me You Love in the Dark #5 gives us a lot to think about. On the surface it may look like a particularly creepy gothic romance. But it also touches on the fine line between an artist and her creations, and about getting caught up in the imaginary aspects of a relationship at the cost of turning a blind eye to the reality. I did not expect the ending, but it was set up so brilliantly that it felt incredibly right.

The Me You Love in the Dark #5

Reality hits Ro hard as she faces off against the creature she once thought she loved.