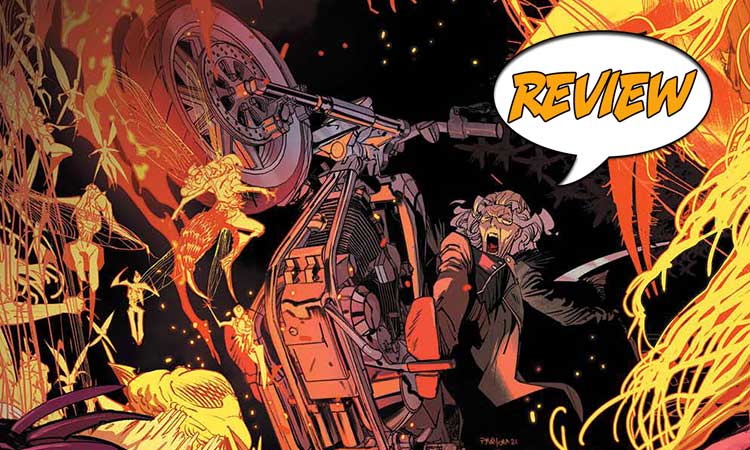 Once and Future #22 Review

Bridgette takes Duncan and Rose to another weapons cache – with a knight in hot pursuit! Can they evade him long enough to get re-armed? Find out in Once and Future #22 from BOOM! Studios.

Previously in Once And Future: Duncan, Rose, and Bridgette go to Bath to save Rose’s parents and find a city where Roman history still has a stronghold, including a Gorgon busy turning people to stone. Rose’s charming parents are alive and well. Her father, the classicist, has even fabricated a mirrored shield, just in case. Instead, they are first confronted by Eliod of Camelot who demands to know which King they stand with. They manage to get Rose’s parents to the Grail Castle safely, but Bridgette explains the three of them must leave – the two Arthurs can sense the presence of Gawain and Percival, and it is not safe for them to stay with the people they are trying to keep safe.

I love how Once and Future #22 starts in media res, as it so often does. This time, Rose drives while Duncan and Bridgette shoot big guns at someone chasing them, Yvain. His story is that he was once basically nice to a lion and the lion remembered. This is not just an everyday lion; it is a giant lion that also happens to breathe fire, and Yvain demands that they join the true Arthur. It is a jaw-dropping opener. Bridgette is taking them to an arsenal for restocking, and there they can hide for a while where Yvain cannot get to them.

Meanwhile, Jack and Rose’s dad have their hands full back at the Grail Castle. A giant has come upon them. Jack tries to distract it with the bell as Rose’s dad recovers the cards with Bridgette’s instructions. Giants, as it turns out, are not easy to deal with. The advice calls for taking an offering to the Fairies in trade. Even in the Castle, life is not easy in the Otherworld.

So, the secret armoury Bridgette took them to is in Stratford Upon Avon. Who happens to be the greatest hunter of the Accord? Bridgette tries to explain that it wasn’t necessarily Shakespeare…but it totally is. My little English major heart leapt in glee. In an interesting touch, the walls are covered with pages of first drafts, which are good insulation to keep wild stories away. In the meantime, they search for anything which could potentially be useful.

In Camelot, things are not going well for Arthur. Lancelot is cutting through his army, and he has not been able to get as many warriors as he desires. He has Merlin summon Eliod, who was turned to stone. He decides to make his stand east of Bath. Merlin, meanwhile, is more poetic than we have previously seen. He is not optimistic about a battle near Bath and sends Galahad off to defeat Lancelot.

Bridgette, Duncan, and Rose find what they can and prepare to take on Yvain and his lion!

One of the most dramatic entrances I have ever seen is that of Yvain in Once and Future #22. From the conversation on the first page, we are clearly expecting a lion; we just were not expecting quite so much lion. To top it off, Yvain’s armor is in shades of yellow and orange and trimmed with lion fur. His helm is either made from a lion’s mane, or his own hair is long and tawny. It is wonderful character design, and the drama is quite marvelous.

Shakespeare’s secret office in the Armoury is also a feast for the eyes. The room is as much a library as it is an armoury, as though books and knowledge are weapons as much as pikes and halberds are. It looks comfortably crowded and the desk full of documents suggests that the owner has merely stepped out for a time. I love the imagination that has expanded the world beyond strictly Arthurian legend and the sense of history that this gives us.

There is never a dull moment in Once and Future #22. Interesting alliances become more complicated, and the danger encourages more resourcefulness from everyone. The book is every bit as entertaining as it is exciting.

As the two Arthurs prepare for war, Duncan and his team attempt to preserve their autonomy!